Gartner is predicting the swift and broad enterprise adoption of Microsoft's Windows 10 operating system, thanks in part to pent-up demand for tablets. This is following similar patterns by Windows XP and Windows 7.

Microsoft's launch of its latest operating system, Windows 10, is on course to set records, with IT research firm Gartner predicting enterprise migration of the new OS will be the fastest yet for the software giant.

There are numerous factors driving the migration to Windows 10, specifically awareness of the end of support for Windows 7 in January 2020, strong compatibility with Windows 7 applications and devices, a pent-up demand for tablets, and 2-in-1 device rollouts, according to the November 23 report.

Gartner projected that half of enterprises will have started Windows 10 deployments by January 2017, with many enterprises planning to begin pilots for Windows 10 in the first half of 2016 and broadening their deployments in the latter part of the year.

Right now, Microsoft claims 12 million business PCs are running Windows 10. All told, the new OS has been downloaded about 110 million times, according to Redmond.

"In the consumer market, a free upgrade coupled with broad legacy device support and automatic over-the-air upgrades ensures that there will be tens of millions of users familiar with the operating system before the end of 2015," Steve Kleynhans, research vice president at Gartner, wrote. "For enterprises, we expect that implementation will be significantly more rapid than that seen with Windows 7 six years ago." 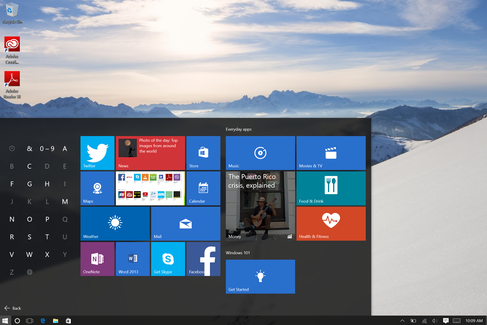 This type of Windows adoption is following a familiar pattern.

After the widespread success and adoption of Windows XP, many businesses skipped Windows Vista, especially after reports of problems with that version of the OS. Later, businesses adopted Windows 7 and then steered away from Windows 8, waiting to see what Microsoft would deliver with Windows 10.

In addition to its projections regarding the migration to Windows 10, Gartner analysts also took a look at three trends in endpoint technology and predicted that by 2019 organizations would deliver twice as many applications remotely, compared with 2015.

"Organizations will centralize a number of applications over the next three years to enable platform- independent computing," Nathan Hill, research director at Gartner, wrote in a statement.

Hill explained that, as platform-specific Windows applications dip below a certain threshold and become a manageable minority (between 20% and 30% of the application portfolio), organizations will find it increasingly financially and operationally attractive to ring-fence all of them using device-independent delivery options.

"From an IT perspective, Windows 10 and the move of applications to the back end will dramatically change how those applications are delivered to employees," Ken Dulaney, vice president and distinguished analyst at Gartner, said in a statement.

Dulaney also noted that updates would be more frequent, more incremental, and less obvious to the end-user.

"Software vendors and internal IT have much to do to adapt to this new model and to move away from the image management model for PCs of today," Dulaney wrote.

In addition, as businesses demand larger screens for their workspaces, this will bring higher-resolution screens and more of these displays into the workplace, which Gartner said would lead to 30% of enterprises spending more on display screens than on PCs.

[Read about the latest Windows 10 updates for smartphones and PCs.]

Gartner also sees the proliferation of touch-screen notebooks ramping up by 2018, when the IT firm projects a third of all notebooks shipped would have touch-screen displays.

Touch screens will become more normalized as a default feature for notebooks as pricing becomes much more competitive in the second half of 2016, according to Gartner.

"All of these trends portend a new employee workspace that is more mobile, more capable of working more naturally with humans, and, overall, more productive and secure. Endpoint support staff must rethink the workspace and work with suppliers to re-architect and re-cost standards," Dulaney added.

Nathan Eddy is a freelance writer for InformationWeek. He has written for Popular Mechanics, Sales & Marketing Management Magazine, FierceMarkets, and CRN, among others. In 2012 he made his first documentary film, The Absent Column. He currently lives in Berlin. View Full Bio
We welcome your comments on this topic on our social media channels, or [contact us directly] with questions about the site.
Comment  |
Email This  |
Print  |
RSS
More Insights
Webcasts
Using MS Teams as Your Phone System - FREE Event 4/14
Advancing the Hybrid Cloud & App Modernization Journey with IBM
More Webcasts
White Papers
2020 SANS Enterprise Cloud Incident Response Survey
The Top 5 Mistakes Everyone is Making in Vulnerability Remediation
More White Papers
Reports
The State of Endpoint Security
Tech Insights: Detecting and Preventing Insider Data Leaks
More Reports

This is also the first time in my recollection Microsoft aggressively offered users a free upgrade to 10. I did accept the free offer but I have not upgraded as of ye because I wanted to assure the bugs were out and the appropriate patches were applied as they reached critical mass. I do think it was the best plan to get adoption and positive press. I am glad to hear that those using it are not experiencing a lot of issues.