Though the world relies more on PCs than tablets, the PC market will continue to shrink for the foreseeable future, according to a new report from the research firm IDC.

However, desktop operating systems saw an uptick in November, according to a report from the web tracking firm Net Applications. Apple's OS X Mavericks and Microsoft's Windows 8.1, the two newest PC desktop operating systems, gained a substantial number of users last month. But the increase for each OS likely had more to do with computer upgrades than sales of new machines.

IDC said worldwide PC shipments will fall 10.1% this year, slightly more than it previously forecast. Shipments will contract by another 3.8% next year before stabilizing. IDC said 349.4 million PCs were shipped in 2012, but it expects 314.2 million to ship this year and 305.1 million in 2017.

IDC said that people use traditional PCs for more hours per day than they use tablets or phones, suggesting that, even though the PC industry is in decline, desktops and laptops remain indispensable. Nevertheless, PC sales have cratered as consumers have shifted more of their activity to tablets. This change in preferences hasn't obviated the need for PCs, but it has meant users are waiting longer than ever to upgrade their machines.

The report said tablets haven't affected commercial PC shipments as much as consumer ones, but the consumer and commercial markets face similar long-term trajectories. Portable PCs in emerging markets are expected to be the biggest source of growth over the next few years, but even in those markets, shipments will be slower than ever before.

Among the platforms vying for PC users, Windows 7 remains the top option, according to Net Applications. It snared 46.64% of PC traffic in November, up slightly from 46.42% in October. Though most new PCs aimed at consumers feature touch screens and Windows 8.1, many businesses are still purchasing new Windows 7 machines. 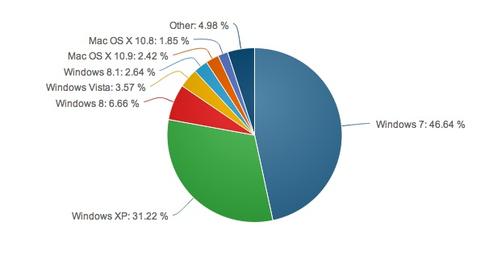 Windows XP got 31.22% of the market in November, versus 31.24% in October. The OS loses support from Microsoft in April, and even though its share is down substantially this year, it's clear that many users still haven't upgraded their OS.

Windows 8 dropped from 7.53% to 6.66%, while Windows 8.1 rose from 1.72% to 2.64%. These two systems claimed 9.3% of the market -- only a slight improvement from last month's combined share of 9.25%. This indicates that Windows 8.1's adoption uptick stems from upgrades to Windows 8 systems, rather than device purchases. That said, it makes sense that Windows 8.1 sales would stall in the weeks before Thanksgiving. Many buyers were no doubt waiting for Black Friday and other holiday sales. The December and January statistics should be more revealing.

Apple's OS X Mavericks jumped to 2.42% of the market from 0.84% the month before. Its predecessor, OS X Mountain Lion, predictably took a big hit, dropping from 3.31% to 1.85%. The various versions of OS X accounted for 7.56% of the market. This means Apple has successfully moved almost one-third of its user base to its newest platform, which was a free upgrade to all users with compatible hardware.

Windows 8.1 was likewise free to Windows 8 users. Microsoft's updated version accounts for 28.4% of the Windows 8-Windows 8.1 combined user base. This means Windows 8.1 has more users than OS X Mavericks, but OS X Mavericks has enjoyed a slightly better adoption rate among core users.

Windows operating systems accounted for 90.88% of the PC market, versus 90.66% in October. OS X's share fell from 7.73% in October to 7.56% in November. For most of the year, OS X trended incrementally up, while Windows trended incrementally down. November was one of the few months in which the relationship was reversed. Since January, Windows has lost 0.83 percentage points, while OS X has gained 0.48.

Consumerization 1.0 was "we don't need IT." Today, we need IT to bridge the gap between consumer and business tech. Also in the Consumerization 2.0 issue of InformationWeek: Stop worrying about the role of the CIO (free registration required).

We welcome your comments on this topic on our social media channels, or [contact us directly] with questions about the site.
Comment  |
Email This  |
Print  |
RSS
More Insights
Webcasts
Unlocking the Ultimate Source of Truth in Cloud Security--Network Data
Business Continuity with Contact Tracing
More Webcasts
White Papers
DevOps for the Database
2020 SANS Enterprise Cloud Incident Response Survey
More White Papers
Reports
The ROI Of SD-WAN: Not Just A Numbers Game
Dark Reading Report Round Up
More Reports

True but I bet most of those xp machines are on the internet. We have some equipment that runs on software that needs XP. We also have one that runs 98. None are connected to the internet though.
Reply  |  Post Message  |  Messages List  |  Start a Board

Yes, Paul. I was thinking about the security issues when I wrote the word "unusable." But, there is one place where XP can go on forever, and that is if an XP machine is the brains behind some instrument or device that has NO exposure to the internet At ALL.
Reply  |  Post Message  |  Messages List  |  Start a Board

@Gary... It wont become unusable but with no suppoirt means no updates. As security flaws open up there will be no fixes. You are taking a big risk if you continue to run XP.
Reply  |  Post Message  |  Messages List  |  Start a Board

Wow is all I can say for all the PCs that still run windows XP. That is going to be a big security hole for organizations that don't upgrade.
Reply  |  Post Message  |  Messages List  |  Start a Board

PCs are production and consumption devices whereas Smartphone and tablets are only consumption devices at the moment. PC sales are not growing as they used to because now they are competing with mobile devices so I guess that is where the PC Slump comes from. And I guess if we continue to hold PCs and mobile devices separate, then I would not expect PC to ever become obsolete unless mobile devices were to get a massive power boost (internally or from the cloud) and have a docking station available in the market.
Reply  |  Post Message  |  Messages List  |  Start a Board

Agree completely. When the hammer I have does exactly what I need and does it well at a decent price, I don't need to run down to Sears to buy the "New and Improved!" model every year... especially if I'm going to have to learn an entirely new way to use it.

I'll bet we're going to see a similar topping out of the smartphone market soon. How many of the incremental changes now being added are really being used?
Reply  |  Post Message  |  Messages List  |  Start a Board

Every decent computer purchased in the past 5 years will run essentially anything you need to (except serious games) reasonably well; software isn't driving hardware purchases the way it did a decade or more ago.  That's the big driver for the slump.

I know that lots of gadget-heads and hipsters will feel a burning desire to buy something new, but the majority of folks don't see a reason to spend money on an upgrade; if what you mostly do is look at Facebok and play Candy Crush Saga, how much iron (or OS) do you need?

The phrase "Windows 8.1 and OS X Mavericks are compelling upgrades" proves just how out-of-touch the author is.  8.1 may be a compelling upgrade if you got suckered into Win8 in the first place, but a large majority of folks seem to prefer the significantly better UI in Win7, and OSX is only an option if you are one of the less than 10% of users who have a Mac.  Between them they are important to far less than a quarter of the PC population, though one assumes that both are critical to advertisers...

I wonder what will happen in April with XP. Still 31%! Will the lack of support mean that the operating system quickly becomes unusable? Will there be a mad dash to other Windows operating systems? Will many users abandon their PC's and laptops and rely on tablets and smartphones? I was using XP myself, and I found it perfectly adequate for my needs, but my motherboard died about 3 months ago, and not wanting to purchase a ticket on the titanic, I bought a Windows 7 machine.
Reply  |  Post Message  |  Messages List  |  Start a Board

I'll be interested to see whether there's any demand for the new Mac Pro. It looks like a great machine, but I ditched my tower for a laptop in 2011 and haven't looked back.
Reply  |  Post Message  |  Messages List  |  Start a Board

We're purchasing my husband's uncle a laptop for Christmas as a combined gift. As the "techy one" in the family, I tried -- oh so hard -- to convince them that a tablet or even Chromebook may be more appropriate, but to no avail. There's certainly still a market  for PCs, but I agree -- it's certainly shrinking.
Reply  |  Post Message  |  Messages List  |  Start a Board
Page 1 / 2   >   >>
Editors' Choice
Hot Topics