Oracle Linux Wants To Be 'Dockerized' Too - InformationWeek

Oracle Linux is available in a Docker container on the Docker Hub, which should aid development and database app mobility.
10 Cloud Migration Mistakes To Avoid
(Click image for larger view and slideshow.)

Oracle Linux, the distribution produced by the database and applications company, is now available on the Docker Hub as a containerized operating system, ready to be downloaded.

Other Linuxes were already there. Canonical's Ubuntu, Red Hat's Enterprise Linux, and the community sponsored Fedora, were all available, along with SUSE and CentOS. In that sense, it's no surprise that Oracle Linux joins them.

But the addition of Oracle Linux is notable for two reasons.

Oracle wouldn't mind if its version of Linux, in which it invests heavily, became more widely used; distribution via Docker downloads is a new channel it can take advantage of. In addition, there would be little demand for Oracle Linux on the Docker Hub if Docker adoption hadn't proceeded to the point where it's beginning to appear in production systems.

The Docker Hub is the online repository established by Docker Inc. to be the place where Docker users could submit copies of the software they had placed in a container, giving other parties the option of downloading and using the same image rather than go through the containerization drill themselves. Oracle Linux will find itself in good company there. There are 45,324 contributed Docker images on the hub, which launched last June. 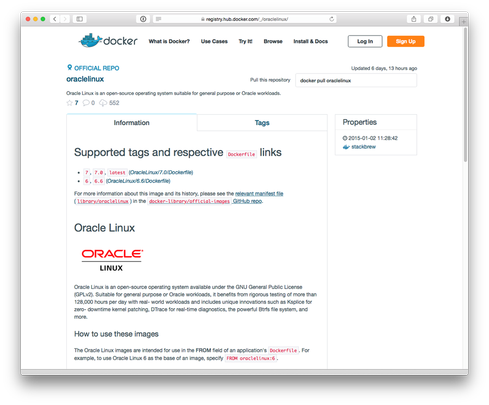 Oracle Linux is a version that is optimized to work with the Oracle database system and Oracle applications. Developers working on a future production system would want to have a copy of Oracle Linux in a Docker container for several reasons: It could be moved around easily, even with a geographically distributed development team, and it could serve as the core of an application reorganized as a set of discrete services, each in its own container.

"One way you can start is to create your own Docker image from scratch," noted Wim Coekaerts, senior vice president for Linux and virtualization at Oracle. But a development project will proceed faster if the team can simply download Dockerized Oracle Linux from the Docker Hub, he said in an interview.

"We decided to make it real easy to get started with Oracle Linux," Coekaerts noted.

Oracle also wants "to participate in the growing use of the Docker model," he added.

Coekaerts, like other observers of the Docker adoption phenomenon, expressed caution about the setting in which containerized Oracle Linux will be used. "If you want complete isolation, virtual machines still represent the highest level of isolation," he said. "I don't think Docker is going to take over from virtual machines."

But he acknowledged that having a future database application formatted in a Docker container or in more than one container would make it easier to move around, to share across a team of developers, and to maintain by a DevOps staff.

"We're moving to a more hybrid world of deployment," Coekaerts acknowledged, in which both virtual machines and containers will play a role. 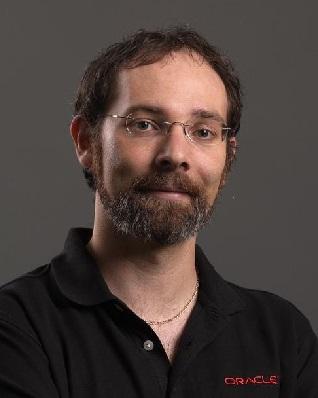 Oracle Linux was launched in October 2006, when then-CEO Larry Ellison declared that bug fixes and kernel updates needed to occur at a faster pace than Red Hat -- one of the primary suppliers of Linux to Oracle database users -- was willing to go along with.

Red Hat defended its practices, saying it wanted maximum assurance of stability and it needed to apply an extensive testing process to changes in Enterprise Linux. Oracle spokesmen said that was fine, but added Oracle would charge half of Red Hat's maintenance fees to adopters of Oracle Linux.

It's impossible to know whether Red Hat's overall growth was affected, but the Oracle move appeared to have only marginally slowed Red Hat down. Its revenues for 2006, reported Feb. 28, 2007, were $400.6 million. Revenues for fiscal 2014, reported March 23, 2014, were $1.53 billion, according to Red Hat's announcement. Revenues for the fiscal 2015 year haven't been released yet.

Charles Babcock is an editor-at-large for InformationWeek and author of Management Strategies for the Cloud Revolution, a McGraw-Hill book. He is the former editor-in-chief of Digital News, former software editor of Computerworld and former technology editor of Interactive ... View Full Bio
We welcome your comments on this topic on our social media channels, or [contact us directly] with questions about the site.
Comment  |
Email This  |
Print  |
RSS
More Insights
Webcasts
Building Asset Management into Your Enterprise Security Strategy
SASE: The Right Framework for Today's Distributed Enterprises
More Webcasts
White Papers
A New Take on Cloud Shared Responsibility
SANS 2021 Cyber Threat Intelligence Survey
More White Papers
Reports
Are We Cyber-Resilient? The Key Question Every Organization Must Answer
The State of Cloud Computing - Fall 2020
More Reports

I misstated how Red Hat Enterprise Linux is available in a Docker container. A RHEL user would download it from the Red Hat site, not the Docker Hub. Ditto for SUSE Linux.
Reply  |  Post Message  |  Messages List  |  Start a Board

Basically, this is a sign of how far Docker has come in a little over 18 months. It's mainly used in development and moving things around, not yet part of production systems in the enterprise. But Oracle Linux, as the core of future database applications, is a pointer toward Docker being drafted into production system use.
Reply  |  Post Message  |  Messages List  |  Start a Board
InformationWeek Is Getting an Upgrade!

Does Identity Hinder Hybrid-Cloud and Multi-Cloud Adoption? Joao-Pierre S. Ruth, Senior Writer,  4/1/2021
White Papers
SANS Institute Survey: The State of Cloud Security
5 Reasons to Protect your VPN with Multi-Factor Authentication
The Impact of the SolarWinds Breach on Cybersecurity
Smart Service Management: Working Better Together with a Connected Enterprise
ITSM for the Enterprise - What Makes it Work?