For several days last month, Satya Nadella's impending promotion to Microsoft CEO was one of the technology industry's worst-kept secrets. In the days since, more reports about Microsoft's confidential plans have trickled out, including leaks about upcoming updates to Windows and Windows Phone.

Expected this spring, Windows 8.1 Update 1 includes a number of tweaks to make the touch-centric OS more appropriate for mouse-and-keyboard use. Microsoft has yet to confirm the update, but with several functional builds hitting the web over the last few days, signs point -- barring a veto from new boss Nadella -- to an imminent release.

Previously leaked details included UI changes that make Modern apps respond to mouse clicks more as desktops apps do, as well as a new option to pin Modern apps to the desktop taskbar. Update 1 will also reportedly recognize whether it is running on touch or nontouch hardware. This will allow it to adjust dynamically which user interface elements it displays and which programs it uses by default to launch certain files.

The tech enthusiast site McAkins Online uncovered additional details over the weekend while investigating a recently leaked build. The site said that, when an app has been added to the taskbar, users can right-click the app's pinned icon to reveal a Windows 7-style jump list of related features and items.

Modern apps also include new access to the taskbar in Update 1, McAkins said. Whereas Windows 8.1 currently keeps desktop UI elements out of the Modern UI, Update 1 enables users to access the desktop taskbar from within Modern apps by navigating the mouse to the bottom of the screen. This move toward cross-pollination between Windows 8.1's two UIs fits into reports about Windows 9, which is expected to push the concept further by allowing Modern apps to be run in a windowed mode on the desktop.

As for Windows Phone, Microsoft is evidently making progress on the long-awaited Windows Phone 8.1 operating system. Previous reports have indicated the OS will include a notification center and digital assistant, features already present in iPhone and Android smartphones. Though Cortana, the alleged digital assistant, is still mostly the stuff of rumors and guesswork, new evidence of the notification center emerged in the last few days. The Windows fan blog site Winphollowers has published purported screenshots of Windows Phone 8.1's "Action Center." 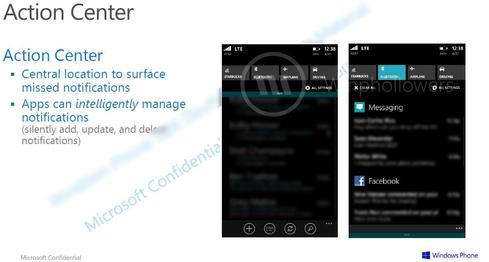 Citing unnamed sources, the website The Verge reported Monday that Microsoft has begun sharing an early version of its Windows Phone 8.1 SDK with select developers. On cue, a developer started a Reddit thread Tuesday morning that catalogues the SDK's various feature upgrades.

Neither Cortana nor the Action Center are present in the kit, suggesting that if Microsoft is planning these tools, it doesn't want to spill the beans early. But the SDK does include at least one potential blockbuster change -- support for "Universal Apps" that let developers build Windows Store and Windows Phone titles using the same HTML and JavaScript code. This move could encourage app-makers to pay more attention to Microsoft's Live Tile ecosystem, and might represent the early stages of a rumored Windows Phone-Windows RT merger.

Other features discovered in the SDK include an option to select which apps receive texts; a tool to track battery life; separate Music and Video apps in place of today's combined Music + Video app; and Internet Explorer 11 with improved YouTube support. The kit also tweaks the mobile OS's multi-tasking feature; currently, apps terminate when the user hits the back button, but based on the SDK, Windows Phone 8.1 will instead suspend apps in the background, more like the multi-tasking in Windows 8.1.

Microsoft's devices and studios group is also evidently building a new reader app for Windows. According to a recent job posting, the company is looking