Microsoft did not disappoint at its Windows 10 hardware launch, held October 6 in New York City.

Windows 10 has proven popular in the 10 weeks it has been available as a free upgrade for Windows 7, Windows 8, and Windows 8.1 users. The new OS has been downloaded on more than 110 million devices, says Microsoft executive vice president of the Windows and Devices Group Terry Myerson. More than 8 million of those are business PCs.

The event kicked off with a HoloLens demo of mixed-reality gaming experience Project X-Ray. Developers will be happy to learn Microsoft is making a developer kit available in Q1 2016 for a cool $3,000.

Two new additions to the Lumia family were officially introduced as the Lumia 950 and Lumia 950 XL. The smaller Lumia 950 measures 5.2 inches and has a hexa-core processor; its larger counterpart, the 950 XL, has a 5.7-inch display and an octa-core processor.

Both smartphones have OLED screens, liquid cooling, USB-C ports, and glance screen technology, which provides data like text messages and email alerts when you glance at the screen without using battery life. Other features include a 20MP camera with dedicated camera button and 4K video, and 32GB of storage.

We also saw a demo of Continuum, a Windows 10 feature that lets users turn their smartphone into a PC with the Microsoft display dock, monitor, keyboard, and mouse. Universal apps scale to accommodate the larger screen size, which can be used to run programs like Word and PowerPoint on the monitor while the smartphone retains its full functionality. 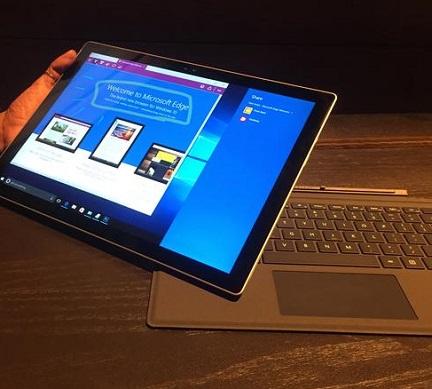 Another highlight of today's event was the Surface Pro 4. Microsoft cut back on the bezels to increase its display to 12.3 inches, with 5 million pixels, while maintaining the original device footprint. It's thinner as well, with a frame measuring 8.4mm.

The Surface Pro 4 packs 16GB RAM, can handle up to 1TB storage, and runs 30% faster than its predecessor and 50% faster than the Macbook Air. Additional features include support for Windows Hello, fingerprint reader, and 0.4mm Gorilla Glass cover. A new type cover has a backlit keyboard and 40% larger trackpad.

Microsoft also updated the Surface Pen to deliver a smoother writing experience. The new pen comes in an expanded five colors with interchangeable tips for writing with a pencil, ballpoint pen, etc. It has 1,024 levels of pressure sensitivity and the ability to summon Cortana, through which you can search via the Edge browser and mark up webpages.

It also has a tail eraser. "We finally put an eraser on it!" exclaimed Panay. "Isn't that funny, there's a pencil out there without an eraser," he joked in a not-so-subtle dig at Apple.

It's probably no coincidence this date coincides with the opening of Microsoft's New York City flagship store. 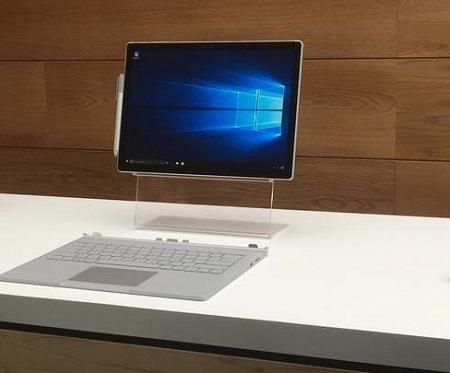 The star of Microsoft's show, its new Surface Book laptop, came as a surprise.

"We made the ultimate laptop," said Panay, holding up the sleek device.

Microsoft's Surface Book is a 13.5" convertible laptop with a newly designed snakelike hinge connecting the keyboard to the display. Its 13.5-inch screen has 6 million pixels, 267 PPI and supports both Surface Pen and touch input.

With the press of a button, the display disconnects and can be used as a fully functional Surface tablet. The keyboard is on the heavy side, but the tablet is extremely lightweight.

The specs for the Surface Book are similar to those of the Surface Pro 4. It packs a quad-core Skylake processor, 16GB RAM, and up to 1GB storage. Its keyboard also has an Nvidia GeForce GPU. The Surface Book promises 12 hours of battery life and twice the power of Apple's MacBook Pro.

The price of the Surface Book starts at $1,499. It can be preordered starting Oct. 7 and will be available Oct. 26.

As rumors suggested, the Band has been updated with a curved, scratch-resistant Gorilla Glass display that is reportedly more responsive to touch. It builds upon the capabilities of its predecessor and contains a GPS, guided workouts and the ability to monitor sleep, count steps, track caloric burn, and send smart notifications.

Microsoft Band is now integrated with Cortana, which provides workout reminders and calorie burning updates. It also has a barometer for tracking elevation. The Microsoft Health app provides "constant and immediate access" to usable health data, explained Microsoft's Lindsey Matese, and users can view data including a continuous heart rate monitor and a breakdown of caloric burn in carbs vs. fats.

The Band can be preordered starting later Oct. 6 and will be available on Oct. 30 for $249.

Kelly Sheridan is the Staff Editor at Dark Reading, where she focuses on cybersecurity news and analysis. She is a business technology journalist who previously reported for InformationWeek, where she covered Microsoft, and Insurance & Technology, where she covered financial ... View Full Bio
We welcome your comments on this topic on our social media channels, or [contact us directly] with questions about the site.
Comment  |
Email This  |
Print  |
RSS
More Insights
Webcasts
How to Effectively Analyze Security Data
5 Steps to Integrate SAST into the DevSecOps Pipeline
More Webcasts
White Papers
The Insider's Guide to IP Geolocation Data
Cyber Security in Healthcare
More White Papers
Reports
Cyber AI: An Immune System for Email
Assessing Cybersecurity Risk in Today's Enterprise
More Reports

I think you're spot on.... I think the Lumio when paired with Windows 10 is the perfect business companion. I know of many that would really appreciate being able to start a process on one device (like drafting an email) and then finish on a desktop (inserting attachments)

I see a huge potential in schools, where students will easilly be able to keep track of work and projects easilly.
Reply  |  Post Message  |  Messages List  |  Start a Board

@mejiac the release of Surface Book is definitely a sign Microsoft is serious about being seen as a hardware and software company. Surface Pro 4 is great. A few minutes of using it was enough to see how powerful it was, and there are some handy subtle features packed in there (larger trackpad, pen eraser) that set it apart from Pro 3.

As for Lumia, I'm not sure it will have the same popularity -- despite the very impressive specs. Microsoft is still fighting an uphill in the mobile space. I think the new Lumias could be handy for business, though, especially with the Continuum feature. It was cool to see that put to use.
Reply  |  Post Message  |  Messages List  |  Start a Board

Microsoft is definitly serious about both re-conquering the consumer world and also provided value to the business side. The surface line is getting better and better (at my office the adoption rate has increased)

The new Lumio line are pretty sleek. I noticed that it has a lot of hardware features, which I think it makes it distinct from competitior (20 MP camera?! WOW)

As you mentioned, the adoption rate of Windows 10 is evidence enought that it's own it's way to become a great OS (I personally love it!)

I was a fan of the Surface Book, that one was a surprise. Microsoft needed a more traditional laptop in its lineup. Even though the Surface Pro 4 is awesome, it won't appeal much to people who don't like the hybrid model. While the Surface Book is heavier, it's also easier to balance on your lap - a big win in my book (haha).
Reply  |  Post Message  |  Messages List  |  Start a Board

The Surface Book is a pretty exciting. Seemed odd with Microsoft championing it right after saying that it was killing laptops with the Surface Pro 4, but hey, it's a really nice bit of kit.

Not sure I'd say it's the most powerful laptop in the world though. I bet a few gaming laptop makers would have something to say about that.
Reply  |  Post Message  |  Messages List  |  Start a Board
Editors' Choice
Hot Topics