Microsoft aims to accelerate enterprise adoption of Windows 10 and Surface Pro 4 with additions to its Surface Enterprise program.

Microsoft's Surface Pro 4 is in the spotlight Tuesday as the company announces new initiatives to broaden enterprise adoption of its upgraded hybrid device and Windows 10 operating system.

Redmond is announcing two additions to its Surface Enterprise Initiative, a program announced in September to help businesses navigate the process of buying and implementing Surfaces for employees. It also has plans to expand its current number of resellers.

While the commercial response for Surface Pro 4 has been positive, "almost equally important for business is the infrastructure for managing thousands of devices," said Brian Eskridge, senior manager of Microsoft's Windows and Devices group, in a briefing with InformationWeek.

[Inside the new Surface Book: take a closer look.]

The first of these demands is being addressed with Microsoft Complete for Enterprise, a service package including device support and warranty that will ship with the Surface and keyboard for business customers via commercial resellers.

There are four components in the Microsoft Complete for Enterprise bundle:

Microsoft is also introducing a trade-in program to boost Surface adoption. Customers can hand in their old devices and apply the product's value towards a new Surface Pro 4.

"Many customers have told us that they want to upgrade to Surface and Windows 10, but have invested in devices and need to maximize the value they receive from those assets," wrote Belikoff in a blog post on the news. The trade-in program is not a limited-time promotional offer, but an evergreen program for enterprise customers.

The bundle and trade-in option will be available starting in early January, in alignment with businesses' usual purchasing plans. Initially both will only apply to the Surface Pro 4. However, Microsoft plans to expand the program to other devices, eventually. 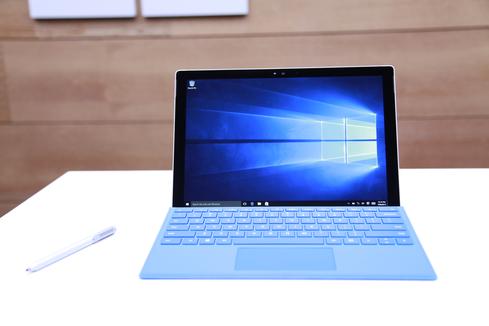 In another effort to ramp up Surface Pro and Windows 10 adoption, Microsoft is broadening its number of resellers to nearly 5,000 outlets across 30 markets. This is an increase from a few hundred resellers across 20 markets, as announced at its Worldwide Partner Conference (WPC) in July.

The recent expansion stems from a demand among several enterprise customers (several small to medium businesses, educational institutions, and state and local governments) to purchase devices from local outlets they normally support.

One month after it released Windows 10 to the public, Microsoft reported the OS had been downloaded on 75 million PCs and 1.5 million enterprise devices. Adoption had increased to 110 million by early October; more than 8 million of those were business PCs.

Redmond aspires to have Windows 10 running on one billion devices by 2018, three years after its initial launch date of July 29, 2015. Enterprise devices will play a key part in achieving this goal, especially as the PC market lags.

Kelly Sheridan is the Staff Editor at Dark Reading, where she focuses on cybersecurity news and analysis. She is a business technology journalist who previously reported for InformationWeek, where she covered Microsoft, and Insurance & Technology, where she covered financial ... View Full Bio
We welcome your comments on this topic on our social media channels, or [contact us directly] with questions about the site.
Comment  |
Email This  |
Print  |
RSS
More Insights
Webcasts
Zero Trust for a Work-From Home World
Hybrid Cloud: The Great Balancing Act
More Webcasts
White Papers
Sunburst: Impact and Timeline
Prevent vs. Pay: A Better Ransomware Plan
More White Papers
Reports
Key Strategies for Managing New Risks in Cybersecurity
Special Report: Edge Computing: An IT Platform for the New Enterprise
More Reports

The pooled claims I find a little odd but I can understand since Microsoft isn't known for its hardware.  A flaw that cripples every Surface in a company would be a big deal but it seems like an unlikely security blanket in most instances.   I've abused my Surface so I guess I don't have the fear that a batch of them will just give up out of nowhere.  I do wonder though on the Enterprise side how they would deploy the Surface, we're a mid-sized company and I roll it out as a laptop/desktop replacement using a Surface dock and all the peripherals that are already at a desk.   Swapping it for an iPad would be a poor use for it in my opinion so I wonder if that's one of the things holding it back in larger companies.
Reply  |  Post Message  |  Messages List  |  Start a Board

Going from a week's wait to next-day air is a definite improvement. I also thought the pooled claims was a good offering for business users. If a company was on the edge about investing in Surface, this bundle could be very appealing.
Reply  |  Post Message  |  Messages List  |  Start a Board


These two are big deal and I'm surprised that Microsoft had to officially implement this.  I've had one hardware issue with a Surface and getting it replaced was a bit of a pain.  It had to go back to the Microsoft store first then sent out for "repair" at which time they conceded that it was a hardware fault and couldn't be repaired so replacement was the only option.  Since this took a week that meant a week of someone checking for status updates and a Surface user who really wanted their device back since they were handed a laptop as a backup.
Reply  |  Post Message  |  Messages List  |  Start a Board
Editors' Choice
Hot Topics