50%
Tweet
Microsoft announces a partnership with China's Baidu to broaden Windows 10 adoption in the world's most populated country.

Microsoft is making a major push to distribute its products and services in China, as three partnerships announced Sept. 23 serve to show. The company has made a total of seven agreements with Chinese companies and government agencies this week.

One deal making waves is that between Microsoft and the Chinese search giant Baidu. They have teamed up with the intention of boosting Windows 10 download rates across the world's most heavily populated country.

There are more than 1.3 billion people, and of those hundreds of millions of Windows customers, in the country. The potential for widespread Windows 10 adoption is tremendous. However, only about 10 million devices there have been upgraded to the new OS. Microsoft celebrated 75 million downloads of Windows 10 at the end of August 2015.

[What else is Microsoft up to? Read Office 2016 Launches for Windows.]

As part of the deal, Baidu plans to implement a new "Windows 10 Express" distribution channel on its home page. The shortcut will market Windows 10 to Chinese customers and simplify the upgrade process. Baidu will also launch universal apps for Search, Cloud, Video, and Maps for Windows 10.

Microsoft, in exchange, will make Baidu the default home page and search engine for its Edge browser in China. This means it will be swapping out Bing, a sacrifice Redmond is willing to make in exchange for exposure to Baidu's 600 million active users.

In other Windows 10 news, Microsoft today announced its partnership with China's CETC, which will focus on supporting the configuration and deployment of Windows 10 for Chinese users across specialized fields of government institutions and state-owned organizations with critical infrastructure. 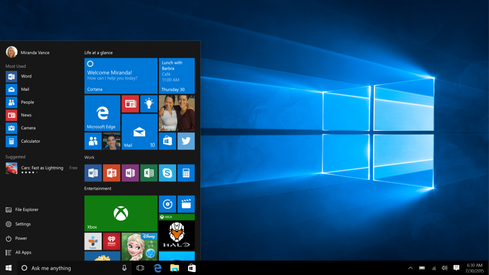 This is the latest in a series of deals intended to increase Microsoft's Chinese presence. Back in March, officials took the stage at the Windows Hardware Engineering Community (WinHEC) summit in Shenzen, China to announce partnerships with Lenovo, Tencent, and Qihu 360 for boosting Windows 10 adoption.

Microsoft also ramped up its partnership with mobile developer Xiaomi, which agreed in March to allow users of its Xiaomi Mi 4 smartphone to download the Windows 10 technical preview. Xiaomi this week announced it will adopt Microsoft Azure to provide cloud services for Mi Cloud.

Kelly Sheridan is the Staff Editor at Dark Reading, where she focuses on cybersecurity news and analysis. She is a business technology journalist who previously reported for InformationWeek, where she covered Microsoft, and Insurance & Technology, where she covered financial ... View Full Bio
We welcome your comments on this topic on our social media channels, or [contact us directly] with questions about the site.
Comment  |
Email This  |
Print  |
RSS
More Insights
Webcasts
The Changing Face of Threat Intelligence
Protecting Mobile Apps and APIs from the Inside Out
More Webcasts
White Papers
2019 Software Exploits, a Technical Deep Dive into Vulnerabilities
Vulnerability Management for Dummies, 2nd Edition
More White Papers
Reports
The New Face of IT Automation
State of Cybersecurity Incident Response
More Reports

Under Satya Nadella, Microsoft is dropping its tendency to compete with everybody everywhere and selectively yielding seach in China in favor of a partnership with Baidu and bare fisted high end CRM competition in favor of a partnership with Salesforce. They'll still compete on CRM but I think Microsoft has concluded Salesforce isn't about to get dislodged from enterprise CRM and it's wiser to cooperate on its mobile user interface than fight that battle to the last bullet.
Reply  |  Post Message  |  Messages List  |  Start a Board
Editors' Choice
Hot Topics