Mac OS X Yosemite is in beta, and we're not seeing everything we'd hoped for. Here are 10 improvements we wish Apple would include in its next operating system.

Apple has scheduled a media event on Thursday, Oct. 16, at which the company is expected to introduce an updated iPad Air, a Retina iPad Mini, and a Retina iMac. The company also probably will discuss Mac OS X Yosemite, which is currently available for beta testing to registered developers and to participants in Apple's OS X beta program.

If OS X Yosemite, the next iteration of Apple's desktop operating system, is not released at the event, it can be expected shortly afterward, perhaps when the Retina iMacs ship.

OS X Yosemite -- version 10.10 for traditionalists -- marks the second free OS X release, excluding the OS X 10.1 Puma release, which was more of a patch than a full update. It continues Apple's effort to make OS X and its mobile operating system, iOS, more complementary. It also builds on the design changes introduced in iOS 7 last year and extended in iOS 8.

What we like
The Yosemite update will make OS X icons look more like iOS icons. That's a good thing for consistency and visual appeal. It also does away with the font Lucida Grande, replacing it with Helvetica Neue. The OS X menus are translucent, unless you want to disable that through the Accessibility control panel. The glassy finish on buttons and other interface elements, however, has become matte. And there's a dark theme option, if you want your desktop interface to look more like an Adobe app.

OS X Yosemite makes iOS communication available through your OS X computer, with a little help from iCloud. It allows you to send and receive SMS and MMS messages, as well as calls to your iPhone, through your Mac. The Handoff feature makes data from Apple apps -- Mail, Safari, Pages, Numbers, Keynote, Maps, Messages, Reminders, Calendar, and Contacts -- available on iOS and OS X devices, so you can start a message in Mail on your Mac and finish it on your iPhone. Handoff will work with third-party apps, too, once developers implement the technology.

To help OS X work better with iOS, AirDrop has been improved to simplify file transfers across the two operating systems. iMessage screen sharing will help bridge the two OSes as well.

The update brings meaningful improvements to Apple's apps, including Mail, Messages, Safari, and Spotlight. And Apple's iCloud service has been refined and rebranded, under the name iCloud Drive. 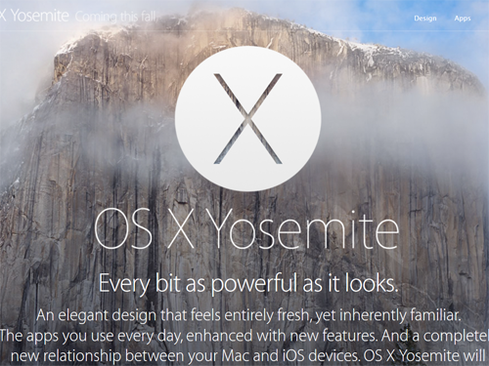 One of the most promising features in OS X Yosemite is its support for JavaScript as a language for system automation. Far more people are familiar with JavaScript than with Apple's previous solution for system scripting, AppleScript.

For all the improvements OS X Yosemite will bring, though, there are a few more changes we'd like to see.

1. Break up iTunes
iTunes should really be three applications: a music player, a file synchronization app, and a digital commerce store. By combining these three apps into one, Apple has created an app that's mediocre, bloated, and confusing. Apple could provide a far better customer experience by focusing on three different apps that each excel at one task.

2. A social Mac App Store
Apple's Mac App Store frequently feels sluggish and its interface could be better. Apple should provide users with more ways to find interesting apps. User-curated lists of favorite apps would be one way to do this. General interface improvements and fewer Apple-selected favorites would be another.

3. Merge Notes, Text Edit, and Stickies
Do we really need three apps for light composition? No, we do not. One app could handle the creation of simple text documents. Modifications to the Finder could allow users to store text documents with the visibility afforded Notes and Stickies.

4. Make iTunes Match free
Apple was out of step with the industry when it charged for MobileMe, the precursor to iCloud, and it's out of step now by charging $25 a year to keep copies of iTunes songs in iCloud. Drop the file fidelity improvement feature if

Apple does all it can to avoid bloating necessary applications however we must also see that the user experience (and accesability) is far greater that third party apps and also there is an increased security in Apple apps. However I agree that XCode could be slimmer.
Reply  |  Post Message  |  Messages List  |  Start a Board

It does add the capability to communicate with iOS but Windows did that with Windows 8 and 8.1. I don't know what additions Windows 10 will be having, but it's safe to say that Yosemite will be competing with Windows.
Reply  |  Post Message  |  Messages List  |  Start a Board

Conflicks with your reasonaning to break up iTunes in to three apps.
Reply  |  Post Message  |  Messages List  |  Start a Board

This new version of OS X just brings tigher integration between the desktop and mobile worlds. It certainly influences people to use an iPhone, which I am currently not.

I like the stylistic refreshes in Yosemite, but I have to say that it doesn't really add anything new functionally. Good thing it is free.
Reply  |  Post Message  |  Messages List  |  Start a Board
Editors' Choice
Hot Topics