The navigation-focused smartphone will be the successor to Garmin's Nuvifone A50. 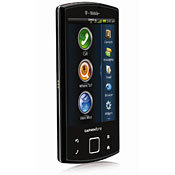 Garminfone
Garmin plans to release through T-Mobile this year a navigation-focused smartphone that would be the successor to the long-delayed Nuvifone A50 that shipped late last year.

The new Garminfone, like its predecessor, would run Google's Android operating system. Layered on top of the OS is Garmin's navigation user interface.

The latest phone would offer voice-guided and on-screen directions with automatic rerouting. The device, which has a 3.5-inch display, can be mounted on a dashboard to provide directions to motorists. In addition, Garmin also offers maps and navigation to people on foot.

Other features offered through Garminfone's UI include real-time traffic, weather, and gas prices. The Garminfone also has a 3-megapixel camera, built-in support for 3G and Wi-Fi networks, and some internal storage, although Garmin has not said how much.

The smartphone will be available through T-Mobile, which could release the device as early as this spring, according to reports. Pricing has not been disclosed.

Garmin is hoping for a smoother launch of its latest Android phone than its Nuvifone predecessor. Garmin introduced the device in January 2008, expecting to release the smartphone in the third quarter of the year. Instead, the Nuvifone didn't hit the market until late last year.

The device was Garmin's first attempt to combine its personal navigation service with a cellular phone and mobile Web browser. At the time, the strongest features were the personal navigation capabilities, such as turn-by-turn directions that weren't available on Apple's popular iPhone.

Since then, similar navigation capabilities have been made available on the iPhone using Apple's GPS technology and applications built by third-party developers offering iPhone applications through Apple's App Store.

Garmin has partnered with computer maker Asus for manufacturing the Nuvifone, Garminfone, and Windows Mobile-based smartphones.