This week, we analyze Microsoft's earnings call, question Windows 10, listen to Bill Gates, and glimpse at Outlook for iOS and Android.

Microsoft kicked off its week with its quarterly earnings call, which revealed the good and bad of corporate performance in late 2014. The report from Redmond on Jan. 26 included revenue of $26.47 billion and quarterly profit of $5.86 billion, a fall from $6.56 billion during the same quarter the previous year.

High points of the call included success in the cloud computing division, which experienced its sixth consecutive quarter of three-figure growth, and the Surface, which broke its own record with $1.1 billion in sales. Merv Adrian, research VP of information management at Gartner, calls this time "a transitional period for Microsoft."

Microsoft also revamped its cloud-based Power BI service to challenge IBM, Tableau and other vendors targeting business intelligence. The Power BI service will be cut loose from Office 365; anyone with an email account will be able to register for its new "freemium" service.

Later this week, after the dust had settled from the many Windows 10 announcements, we began asking questions about how Microsoft plans to develop its new OS in the coming months. Will Windows 10 function on older machines? Is Project Spartan something we really need? Only time will tell.

[Data Analyst: Does Everybody Need To Be One?]

On the topic of Windows 10, we also examined whether its HoloLens can be compared with Google Glass. Is it fair to compare the two futuristic headpieces? According to Gartner analyst Brian Blau, the answer is no.

Microsoft continued to break news throughout the week. On Jan. 29, the tech giant premiered the final version of its Office suite for Android tablets. The app, which is exiting a three-month preview period, contains features that will be familiar to Office users but is optimized for mobile use with larger icons that help with easy navigation.

That same day, a new mobile version of Outlook for iOS and Android arrived in full and preview forms, respectively. For both platforms, the Outlook app will work in sync with Office 365, Outlook.com, Exchange, Yahoo! Mail, Gmail and other prominent email services. 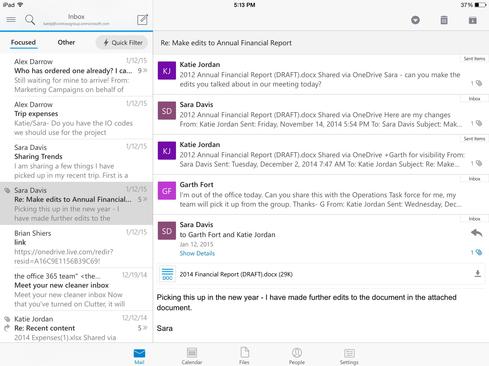 The release of Office for Android and debut of the new Outlook shows that Microsoft is putting forth a strong effort to enhance collaboration and productivity both in and out of the office. If you glance through screenshots of the new apps, it's clear that simplicity and functionality were critical to their development.

We also received an update on Bill Gates, who recently participated in his own "Ask Me Anything" session on Reddit. In addition to chatting about his philanthropic efforts around the world, Gates shared his thoughts on AI and predictions on the future of technology. He also revealed what he received from his Reddit Secret Santa.

Microsoft wrapped up this week with an upgrade to its Azure SQL Database Service. The latest updates promise to bring its cloud-based database service in closer correspondence with the capabilities of its on-premises Microsoft SQL Server.

Kelly Sheridan is the Staff Editor at Dark Reading, where she focuses on cybersecurity news and analysis. She is a business technology journalist who previously reported for InformationWeek, where she covered Microsoft, and Insurance & Technology, where she covered financial ... View Full Bio
We welcome your comments on this topic on our social media channels, or [contact us directly] with questions about the site.
Comment  |
Email This  |
Print  |
RSS
More Insights
Webcasts
Take DevOps to the Next Level
Cybersecurity Risk Management
More Webcasts
White Papers
2020 SANS Enterprise Cloud Incident Response Survey
The Top 5 Mistakes Everyone is Making in Vulnerability Remediation
More White Papers
Reports
Immuta Data Engineering Survey: 2021 Impact Report
The Infoblox Q4 2020 Cyberthreat Intelligence Report
More Reports

Thanks @jagibbons, yes the current version of OWA for Android is in preview form. Microsoft has not announced when the preview period will end, but at that point it will work across all email services.
Reply  |  Post Message  |  Messages List  |  Start a Board
Editors' Choice
Hot Topics