Apple's Siri might soon appear on Macs if a new patent application is any indication.

Based on a patent application published this week, Apple could soon bring Siri, its digital personal assistant for iPhones and iPads, to Macs. It's unclear if and when Apple will make the move, but as described in the application, which was submitted in February, the Mac-based version won't be a simple port of what's already available on iOS devices. Rather, it is designed to leverage OS X's superior horsepower for more sophisticated and powerful tasks, and to push the boundaries of multi-tasking.

The 92-page application, whose publication was first reported by the website AppleInsider, builds on long-running rumors. Siri has been available on iOS since 2011, but despite speculation, Apple's typically secretive leaders have never broached plans to bring the virtual assistant to OS X. The company has hinted at such a move in previous patents, however, and with the newest release, it's clear Apple has dedicated significant thought and resources to the concept.

Apple's application describes several possible methods for invoking and interacting with the desktop virtual assistant, including natural language queries; text input; and gesture and touch controls, such as those inputted through a track pad.

Based on the application, users should be able to summon Siri from anywhere in the OS. As is the case in the iOS version of Siri, the desktop virtual assistant will communicate with an Apple server to generate responses to queries. The application states that the assistant will use context and verbal cues to differentiate various types of user actions. It should be able to infer, for example, when the user speaks to dictate text and when the user speaks to initiate a web search.

Siri for Mac might use graphical context, as well. If the user hovers his mouse cursor over a file, for instance, Siri will recognize the user's intention to work with the file. The user might instruct Siri to print the file, copy it, or to merge it with another document. Likewise, the application indicates that Siri for Mac can sort, organize, and merge files within a folder. Apple also describes examples in which users can apply new settings to emails, such as marking the message as "urgent," via spoken commands. It can also "hold" a collection of files that the user wants to summon later. 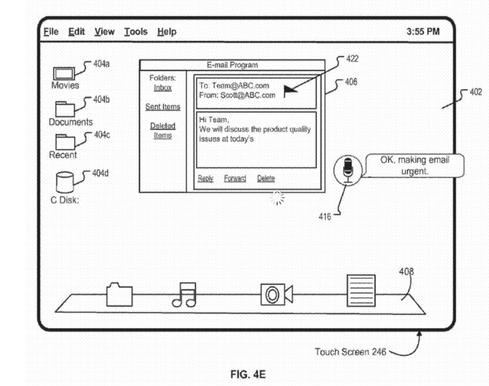 An illustration from Apple's patent application.
(Source: US Patent and Trademark Office)

Most intriguingly, Apple suggests its desktop assistant can act as a "third hand." That is, if the user is using a keyboard, mouse, and track pad to work on one project in the foreground, Siri can handle a separate project in the background. The application illustrates that someone working on a text document might want to insert a picture. Rather than searching for the image herself, the user can simply direct Siri to find one, and then continue working until Siri presents the results.

Such a feature could change the nature of multi-tasking. Today, people don't literally multi-task as much as they rapidly toggle among tasks. The fact that workers generally need to see each task they perform only exacerbates this problem, as most people have only so much screen real estate with which to work. But as described by Apple, Siri could help people stay focused even while juggling several tasks, and to ultimately be more productive.

The devil will be in the details, of course. If users are to trust Siri with productivity tasks, Siri must first demonstrate that it's up to the challenge. Suppose, for example, that a project requires not simply an attractive image, but an attractive image that can be republished under a Creative Commons license. Will Siri be able to accommodate such a request?

Siri currently is absent from the OS X Yosemite preview, which will be released as a final product this fall. That said, it's likely Siri will show up on MacBooks and iMacs eventually. Though Apple keeps its desktop and mobile OSes separate, OS X and iOS already share many features and resources, and they will share even more when Yosemite and iOS 8 are unleashed this fall. Apple execs have said that, even though computers and tablets are different tools that need different UIs, the users' digital experience should follow them across devices. Given that Siri is a core part of the iOS experience, it seems only natural that Apple would extend its digital assistant to Macs.

Microsoft announced Cortana, its Siri competitor, this year, and most Windows Phones users are only just gaining access to the new feature. Despite Microsoft's late start, rumors have suggested Cortana might quickly become part of the desktop and tablet versions of Windows, too. Such a move would be consistent with CEO Satya Nadella's recent talking points; he's said all Windows OSes will converge on a common core, and, like Apple leaders, he's talked about digital experiences that flow across devices. However, Microsoft execs have offered only coy hints when asked about a desktop version of Cortana.

Michael Endler joined InformationWeek as an associate editor in 2012. He previously worked in talent representation in the entertainment industry, as a freelance copywriter and photojournalist, and as a teacher. Michael earned a BA in English from Stanford University in 2005 ... View Full Bio
We welcome your comments on this topic on our social media channels, or [contact us directly] with questions about the site.
Comment  |
Email This  |
Print  |
RSS
More Insights
Webcasts
The Experts Guide to Ransomware Response
Multi-Cloud Data Management for Modern Applications
More Webcasts
White Papers
Global software company contracts with CBTS for Virtual CISO
Cisco Threat Response
More White Papers
Reports
Cloud Misconfiguration Mayhem
The State of Cybersecurity Incident Response
More Reports

Siri on a Mac could be helpful, especially as it learns the owner. Today, though, I'm glad my Mac can't hear or understand me. Given the tech problems it's giving me, Siri would be blushing from some of the names I've called the machine this morning!
Reply  |  Post Message  |  Messages List  |  Start a Board

There's some (unconfirmed) buzz that Cortana is present in internal builds of Windows "Threshold," so if you're a Windows fan, some of the benefits described in this article might be headed your way. In fact, I wouldn't be surprised if Cortana comes to Windows before Siri comes to OS X, since it doesn't seem like Siri is destined for OS X Yosemite. Unless Tim Cook has some kind of "one more thing" moment planned during this fall's expected iPhone/iPad/iWatch press conferences, that makes me think Siri is a late 2015 Mac addition.
Reply  |  Post Message  |  Messages List  |  Start a Board
InformationWeek Is Getting an Upgrade!