The Office preview for Windows 10, the acquisition of calendar app maker Sunrise, and news of SharePoint Server 2016 lead this week's Microsoft news.

Ever since Microsoft unveiled the features of Windows 10 for its consumer audience, enterprise customers have been thinking about what the new OS might bring to businesses. They got an update this week, when Microsoft announced how businesses will receive feature and security upgrades through Windows 10.

Microsoft announced two update tracks for businesses running Windows 10. While consumers will receive monthly fixes through Windows Update, businesses can pursue the Current Branch for Business or Long-term Servicing Branch. The former gives IT departments time to test updates before they're rolled out to the business; the latter is intended to keep mission-critical systems secure by withholding new features throughout mainstream and extended support.

In keeping with its enterprise focus, Microsoft also announced details on the upcoming SharePoint Server 2016, which is expected to debut in the second half of this year. Despite rumors that Microsoft would phase out its on-premises system and emphasize SharePoint Online, news from Redmond confirms that the SharePoint Server will see another upgrade. 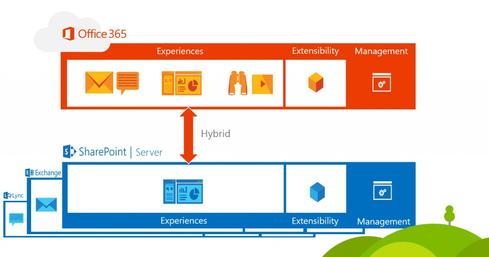 Acknowledging the fact that not all companies innovate at the same pace, Microsoft has chosen not to push the full cloud product just yet. Instead it's narrowing its focus on customers using SharePoint in hybrid form between on-premises and cloud. The capabilities already inherent to SharePoint will be enhanced with newly released features of Office 365 such as Office Delve and Power BI.

Windows Insiders had a new product to test this week when Microsoft released the preview version of Office for Windows 10. The latest editions of Word, Excel, and PowerPoint are available for download in the new Windows Store Beta and are reported to work on PCs, laptops, and tablets running the Windows 10 technical preview.

The entire Office suite is optimized for touch-screen and mobile devices, and will come pre-installed for free on Windows 10 smartphones and small tablets when the new OS is released in full later this year. As they currently exist, the apps allow users to create, review, and edit Word documents, compile and annotate PowerPoint presentations, and build and format charts and graphs in Excel.

[Is Windows entering the smartwatch race?]

Microsoft also kept up its acquisition spree by purchasing Sunrise, a startup that produces calendar apps for iOS and Android. The transaction is reportedly worth $100 million and comes shortly after the release of Outlook for iOS and Android, which was preceded by its acquisition of email startup Acompli. It looks like Sunrise could help further enhance the functionality of Outlook's calendar.

In other Microsoft-related news, this week we also predicted the future of conference calls with HoloLens and shared our love for the Surface Pro 3, which editors think will stand strong even as tablet sales decline.

Kelly Sheridan is the Staff Editor at Dark Reading, where she focuses on cybersecurity news and analysis. She is a business technology journalist who previously reported for InformationWeek, where she covered Microsoft, and Insurance & Technology, where she covered financial ... View Full Bio
We welcome your comments on this topic on our social media channels, or [contact us directly] with questions about the site.
Comment  |
Email This  |
Print  |
RSS
More Insights
Webcasts
Protecting Your Enterprise's Intellectual Property
ROI and Beyond for the Cloud
More Webcasts
White Papers
The Dark Side of SD-WAN
The Trouble with Phishing
More White Papers
Reports
2020 Threat Hunting Report
Special Report: Understanding Your Cyber Attackers
More Reports

As someone who spends most of my days typing, I'm with you both on the keyboard preference. In fact, that was the reason I was the last of my family/friends to switch from Blackberry to touch-screen smartphones. Eventually the idea of more apps and better functionality trumped my need for keys.

For the mobile Office suite, I can see how PowerPoint and Excel would lend themselves to touch optimization. Word maybe... but only for quick and simple documents, casual note-taking, etc. I don't like the idea of typing everything on a tablet screen. Then again, I also swore i would never switch to touchscreen phones...
Reply  |  Post Message  |  Messages List  |  Start a Board

I can't imagine not preferring a keyboard when it comes to business computing.  Frankly, all things considered, I would still prefer a keyboard on a mobile phone but that ship sailed a long time ago (unless you are one of the 7 people still using a blackberry).
Reply  |  Post Message  |  Messages List  |  Start a Board

It's going to be something to see just how a toucn optimized version of office is really going to work. My thinking is that Office is still very much connected to a keyboard-based mentality, so I think users may really struggle with this idea that the productivity suite can be used with touch input.

I prefer a keyboard, so perhaps I am a bit biased in this respect.
Reply  |  Post Message  |  Messages List  |  Start a Board
Editors' Choice
Hot Topics