50%
Tweet
Fueled by advances in boat design and all the data expertise you'd expect in an Oracle-sponsored project, Team USA looks to gain a high-tech advantage as it defends its America's Cup championship. 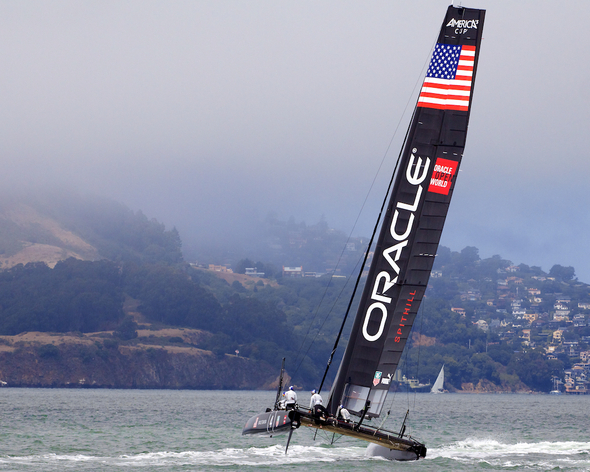 If a person uninitiated in modern sailboat racing scaled the fence surrounding Oracle Team USA's headquarters in San Francisco's Pier 80, he or she might think the facility housed a secret UFO laboratory. Lacking a sail to betray its maritime purpose, the racing team's huge, still-under-construction boat is dominated by a pair of rakish, wing-shaped hulls whose aerodynamic design evokes Area 51 secrets more than seafaring tradition.

Named the AC72, the vessel--or possibly an updated version to be built later this year--will help Oracle Team USA defend its America's Cup title, which the squad won in 2010. The boat is at the cusp of science fiction, decked out with new technology to make it faster and give spectators a more intimate experience.

So new are the AC72's advancements that reporters were forbidden from photographing the AC72 during a recent tour of the facility. Though some details were kept under wraps, attendees were told about a variety of sophisticated hardware and software tools that have been implemented into the AC72's design.

These tools include sensors that use Wi-Fi to communicate real-time information to sailors, allowing crew members to push their reaction times even further. "In the old days, you'd have a mark on a rope [to define the vessel's limits]," said Shannon Falcone, one of the Oracle Team USA sailors, in an interview. "Nowadays, everything is being streamed live on any parameter." He said that sustained Wi-Fi connectivity had been a problem when similar tech was deployed during past campaigns. Thanks to a partnership with Silicon Valley-based Ruckus, however, Falcone remarked that the Oracle team has "found a way around it."

The sensors also feed a wealth of information to analysts in order to validate design changes. The custom software involved in the process has not been fully disclosed, but it's likely that existing technology from the Oracle portfolio plays a role. The 2010 team that won the America's Cup relied on Oracle Data Mining in Oracle Database 11g, according to a Sail World article.

The advance peek at the AC72 was part of the America's Cup World Series Press Day, before a series of preliminary races running August 23-27. Leading up to the America's Cup finals in September 2013, these matches offer teams not only a chance to push new designs but also to grow acclimated to the Bay Area's unique conditions.

For the August races, all 11 of the competing teams are using AC45 boats. These boats share the two-hull design and distinctive name--catamaran--of the AC72, but are much smaller. Each AC45 is 45 feet long along its water-touching surfaces, whereas the finished AC72 will measure 72 feet in length.

Both the AC45 and AC72 use towering wing sails, structures that superficially resemble traditional sails, but are built around a rigid cross-section in the fashion of an airplane wing. The design provides a better lift-to-drag ratio, allowing a catamaran to use air currents for propulsion in much the same way an aircraft uses the airflow to stay in the sky.

Eduardo Aldaz, who works with electrical components and data analysis for Team USA, said that wing sails helped prompt field-wide use of AC45s during the World Series.

Aldaz stated that the 2010 Oracle team that won the America's Cup switched to a wing sail late in the game, prompting moderate controversy in the process. "It could be perceived as an unfair advantage if you start a new race with wings, and you're the only one who's ever used one," he explained. Following this criticism, Team USA, which won the 2010 championship by a wide margin, decided to build "a prototype boat that will have all the technology that needs to be used for the America's Cup, and do a cycle with it, so the teams can start an America's Cup campaign [without worrying] about designing a new boat from scratch." He clarified that each team could design its own sail, and that all the clubs were equipped with "good designers" to do so.

In addition to promoting a level playing field, the AC45s, which Oracle supplied to the other teams, were intended to entice more competitors into the field. The technology-sharing was designed, said Aldaz, to "give [each team] a pretty good starting point for designing their own boat." The cost involved in such a venture--estimated at up to $100 million overall--has deterred some would-be participants; though the August World Series features 11 teams, only two challengers--Artemis of Switzerland and Team New Zealand--were in the final stages of building bigger, AC72-style boats for the main event. An Italian team is expected in the final field as well, and there is a chance that a Korean squad could still enter the fray--but the championship looks to be less grand than Oracle CEO Larry Ellison had initially projected when he began lobbying for the event to be held in San Francisco.

Sail onward to learn more about the tech behind the America's Cup.

Great gallery! Thank you for writing about the America's Cup and for providing such great info on Team Oracle's innovations with sailing technology! I'm overjoyed that IW covered this!
Reply  |  Post Message  |  Messages List  |  Start a Board
Editors' Choice
Hot Topics