6 Ways To Lose The Tech 20
(Click image for larger view and slideshow.)

The BI analytics vendor Tableau Software used its annual user conference in Seattle this week to showcase a slew of upcoming development enhancements to its desktop and web visualization interfaces. It also demonstrated for the first time Project Elastic, a standalone app for tablets that lets users interact with downloaded data via swiping and two-finger zooming.

For the fast-growing Tableau, which claims 22,000 accounts worldwide, Elastic is a new kind of software, highlighting the company's 11-year mission to democratize data discovery and data visualization.

The mobile app, which will start early testing with a couple of dozen customers shortly, will be commercially available next year. No decision has been made about Elastic's pricing model, company officials told InformationWeek.

"We're pioneering a new product and marketspace that doesn't exist yet," said Dave Story, vice president of mobile and strategic growth at Tableau. "When you can literally touch your data, the app disappears."

"We're doing some of our most advanced visualization in Elastic," Story said, and these concepts will be included in future versions of Tableau Desktop. The next version of the desktop tool, likely to be called Tableau 9, is due in the first half of next year, according to other Tableau executives.

Tableau Mobile, an app that was introduced along with Tableau 6.1, will not be going away. Though Tableau Mobile works in conjunction with Tableau Server, Elastic is standalone product and can import large .CSV files directly from an email or a cloud storage site. 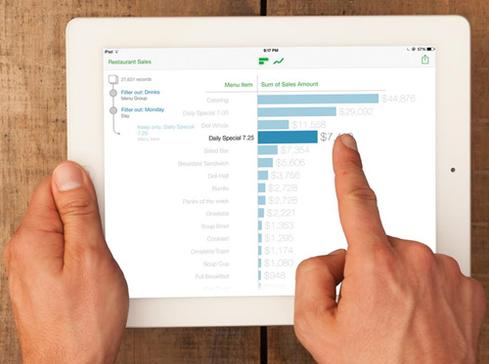 Elastic "may overlap but will not obviate Tableau Mobile," said Story, who demonstrated the app working against a 27,000-record file on an iPad. By swiping, a user can filter items from the visualization or change between "average" and "sum"; two-finger zooming focuses the view, down to the individual record. Once a view is created, its image can be shared with others via email from within the app.

The first public look at Elastic received enthusiastic cheers from the Tableau audience in Seattle during the opening-day keynote.

"Project Elastic, if handled properly, may prove to be another strong point," said conference attendee Benny Tjahjono, director of quantitative analysis at the Federal Home Loan Bank of Chicago. The tool could be a boon to mobile users, predominantly for roadside sales presentations, he said. "It may prove itself to be a product that no organization can live without."

But not all users said they'd rush out and buy it.

Currently, the soft drink bottler sends its mobile personnel a Tableau view embedded into SharePoint. The Tableau dashboard, featuring 20 sales and operational metrics, is assembled automatically every night and sent to 800 iPads.

Another Tableau customer, Allrecipes, said Elastic might have a role.

"For live transaction things, this app would be great," said Grace Preyapongpisa, vice president of business intelligence at the recipe site. She said the tool could give traveling executives an interactive view of traffic, such as around Thanksgiving, when the social media site for cooks sometimes sees a tripling of its Internet traffic.

When asked if she worried that a business user on Elastic might misinterpret data and make incorrect decisions, Preyapongpisa said her team would preaggregate the view before sending anything out. "The risk is higher with [executives misinterpreting] Omniture or Excel."

Indeed, Tableau's Story argued the worry about business users misinterpreting data if given self-discovery tools such as Elastic or a conventional Tableau interactive dashboard is a red herring -- a throwback to an earlier, "command and control" age of data management.

Tableau's "fundamental insight" is that business users, not BI analysts or IT departments, understand business data best, he said. "The validation of [the data model] always comes from a business person."

Ellis Booker has held senior editorial posts at a number of A-list IT publications, including UBM's InternetWeek, Mecklermedia's Web Week, and IDG's Computerworld. At Computerworld, he led Internet and electronic commerce coverage in the early days of the web and was ... View Full Bio
We welcome your comments on this topic on our social media channels, or [contact us directly] with questions about the site.
Comment  |
Email This  |
Print  |
RSS
More Insights
Webcasts
Securing and Monitoring Networks in the 'New Normal'
What We Can Learn from Sports Analytics
More Webcasts
White Papers
MPLS, SD-WAN and SASE
Five Reasons to Protect your VPN with Multi-Factor Authentication
More White Papers
Reports
Special Report: Understanding Your Cyber Attackers
The Drive for Shift-Left Performance Testing
More Reports

Microsoft made a big "democratizing the data" push about eight years ago when it introduced deeper BI capabilities. Way back when it talked about empowering "the difference makers" out there who actually do the work and make decisions (as opposed to IT and BI power users who manage data and set up reports). Microsoft Excel (with ties to SQL Server) was presented as the answer. Companies like Energizer and others bought in and talked about liberating the data, but there's still no end in sight for spreadsheet hell. Will the coming Tableau story be much the same, though with a visual twist. Ask these employees how they ensure consistent interpretation of data across the enterprise, or does each department have its own understanding of "sales" or "customers" or "products" or other measures that essential to keep consistent. I'm not saying Tableau can't do that, but what are the mechanisms of enforcement?
Reply  |  Post Message  |  Messages List  |  Start a Board

You're on fire, Doug!

Project Elastic speaks less to a goal of pushing Excel off the hill (won't happen; Tableau execs told me that isn't reasonable--at all) but rather a way to get their concept of self-service data visualization out into the world and have many more people experience it.

This points to an even bigger idea, expressed here and there at the Tableau user conference in Seattle, that the corporate BI team may not be the best place for analytics to take place per se. Pushing this function out and down is an interesting philosophy, which some big companies (story forthcoming, if IWK wants one) are experimenting with.
Reply  |  Post Message  |  Messages List  |  Start a Board

Oh, Tableau. Project Elastic hints that you're going after Microsoft Excel (or maybe trying to be the Evernote of data) while not really thinking too hard about those troublesome enterprise concerns like data consistency and trying to get to a single version of the truth.

The quote "the validation of [the data model] always comes from a business person," says it all. Microsoft hasn't solved that problem, either. Sounds like Tableau wants to replace spreadmart silo hell with dueling visual dashboard hell. Sure, it's easier to understand data with visual analysis, but just where did that data come from and is it garbage?
Reply  |  Post Message  |  Messages List  |  Start a Board
Editors' Choice
Hot Topics