Recovery.gov, a showcase government-transparency Web site that relaunched on Monday, fails to meet U.S. federal government Section 508 accessibility standards. The non-compliance issues relate to display of data tables despite on-site compliance claims. Sharron Rush of accessibility-advocacy organization Knowbility goes so far as to state, "The recovery.gov Web site is a good example of what NOT to do for accessibility in my opinion."

Recovery.gov, a showcase government-transparency Web site that relaunched on Monday, fails to meet U.S. federal government Section 508 accessibility standards or accessibility best practices. The non-compliance issues relate to display of data tables -- an essential point given the site's promise of "Data, Data & More Data" -- despite on-site compliance claims. Other elements including navigation maps, while compliant, are poorly designed. Sharron Rush, co-founder and executive director of accessibility-advocacy organization Knowbility, goes so far as to state, "The recovery.gov Web site is a good example of what NOT to do for accessibility in my opinion.""Expectations are high for the site, not least because of its hefty price tag: Smartronix, a Maryland contractor, is being paid $9.5 million for its initial overhaul and is likely to get another $8.5 million to keep the site running through 2014," explains Louise Radnofsky in the Wall Street Journal's Washington Wire blog. Compliance with Section 508 of the federal Rehabilitation Act is a baseline expectation, a long-standing federal-government requirement for information-systems accessibility to persons with disabilities. Recovery.gov's accessibility failures -- which are shared by another showcase government-transparency site, USAspending.gov -- are nonetheless easily seen.

A recovery.gov page on accessibility states that "Row and column headers for data tables are identified," surely in recognition of Section 508 standards that apply to data tables:

Use of the site's data-request form, on the site's main page under the heading "DATA, DATA & MORE DATA," via the "Text View of Data" option, generates a two-dimensional (single level of row and column headers) table that does not meet the applicable §1194.22(g) requirement as can be seen via the Web browser's show-source function. The access-board.gov Web site, under the heading "How can HTML tables be made readable with assistive technology?," explains that the requirement may be met either via use of the Scope HTML attribute or via the use of ID attributes in each of the table's row and column headers. The latter approach would require each table cell to have a Headers attribute whose value is linked to the corresponding row and column ID values.

Recovery.gov's programmers chose the simple Scope approach for a data table on the site's main page but implemented it incompletely, neglecting to place Scope attributes in each of the row header fields. Template-generated tables such as this one have neither Scope attributes nor the alternative ID-Headers attributes.

Kate Walser, who is principal consultant at CX Insights, agrees that the Recovery.gov tables are data tables and not layout tables so that the Section 508 table mark-up requirements do apply. (Kate served on TEITAC, the federal advisory committee tasked with refreshing Section 508 accessibility standards.) Her prescription for the latter, main-page table:

"To make the table more accessible, use TH [table header] tags around the state names, and include scope="row". Some of the better assistive technologies will make a best guess about the first cell in that row being a header, but you can't count on that."

This prescription applies for both rows and columns in the completely non-compliant, template-generated tables.

Gareth Horton is senior product manager at BI vendor Datawatch, where he led a project to ensure the Section 508 compliance of his employer's Win C++ software. Gareth's view is that "I would agree with you on [your assessment of recovery.gov problems]. I would say that in practice, it is likely to 'just work,' but the government should do better."

Accessibility measures for the site's data-request form are incorrectly and incompletely applied. Each Input field in an HTML form should have HTML Label tags marking up the text label associated with each choice. Federal accessibility guidelines call for the label to be associated with the choice via a 'for="field-id"' attribute or by placement in the same table cell as the Input field. See, for instance, guidelines on Accessible (508) HTML Forms posted by the federal Department of Health and Human Services.

Poorly designed maps Recovery.gov relies on U.S. maps for basic data viewing and for search. The data-viewing map includes only the very tip of Alaska and completely omits Hawaii, as can be seen in a screenshot -- 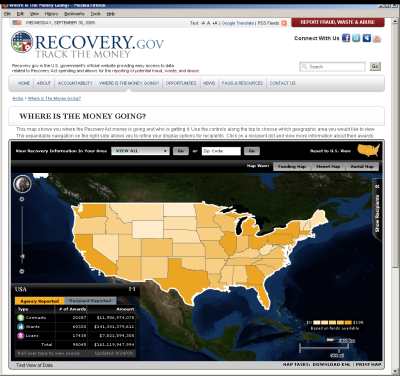 The site's main page similarly features a thematic data-visualization map that, unlike the vertically compressed map shown above, does include Alaska and Hawaii. The main-page map is seen in another screenshot -- 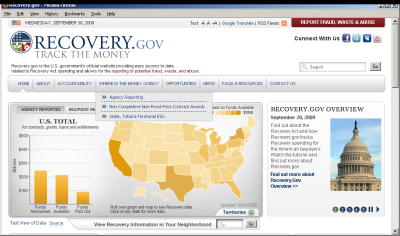 Neither map labels the states. Easily implemented text labels would facilitate finding data for small areas such as the District of Columbia and Rhode Island. Civic organization Common Cause shows how it's done -- 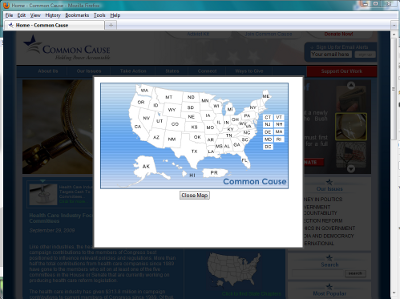 The lack of labels is an unfortunate accessibility issue given America's poor geographic literacy. Daniel C. Edelson, vice president for education at the National Geographic Society, writes in his spring 2009 "Geo Learning" column

"It's no secret that Americans know next to nothing about geography. The most recent National Geographic/Roper Poll (2006) found that half the 18-24-year-old Americans surveyed could not locate New York on a map of the United States, and nearly 6 in 10 could not locate Ohio."

Use of labeled maps would improve recovery.gov's accessibility.

The redesigned Web site was built and managed by a private company, Smartronix, under an expedited General Services Administration contract. The company claims ISO 9001 quality certification and a CMMI level 3 rating for systems and software engineering, which obviously did not inoculate its work from the design and process flaws that led to the launch of a site with basic accessibility issues. As with the similarly-flawed USAspending.gov site, the flaws presumably resulted from staff's incomplete understanding of accessibility requirements and design principles.

Joe Gerczak, Smartronix vice president for programs and technologies, stated in brief phone conversation that the company sees the site as "95% compliant" with Section 508 requirements. (This statement belies the site's posted compliance statement.) Gerczak said that the company has known about some of compliance issues described in this article, which I had made known to the company in a request for comment sent about six hours before I posted this article. He stated that some issues had already been corrected but did not explain which or why all known issues had not been corrected before Monday's relaunch. On the government side, there has been no response to a contact request posted via recovery.gov's feedback form.

The U.S. government has built many, many usable Web interfaces. Recovery.gov is a showcase public-data system for an important government-transparency initiative. The Office of Management and Budget's main page prominently features a graphical links directly to it. It is unfortunate that recovery.gov, in its technical implementation, fails to meet long-standing, widely understood accessibility requirements.

I have posted a follow-on article, Recovery.gov Double Fault: Broken Data Feeds. An executive at a well-known, large systems integrator tipped me off about another problem introduced by the relaunch. The new site cuts off data feeds that were previously available.

I am pleased to see, however, that the programming of the template-driven data table that I cited has been updated so that the page now includes the HTML tag attributes necessary for Section 508 compliance. The speed of the fix does reinforce that 508 compliance (for data tables) is not hard to achieve... if your designers and programmers know the rules.

The new, template-generated HTML-code looks like the following. I bolded the Scope tag attributes that are needed for Section 508 compliance; they support use of assistive technologies for persons with vision impairments.

The code isn't perfect -- the row-header text labels should be marked up with TH rather than TD tags -- but this fix does the job.Recovery.gov, a showcase government-transparency Web site that relaunched on Monday, fails to meet U.S. federal government Section 508 accessibility standards. The non-compliance issues relate to display of data tables despite on-site compliance claims. Sharron Rush of accessibility-advocacy organization Knowbility goes so far as to state, "The recovery.gov Web site is a good example of what NOT to do for accessibility in my opinion."
We welcome your comments on this topic on our social media channels, or [contact us directly] with questions about the site.
Comment  |
Email This  |
Print  |
RSS
More Insights
Webcasts
Securing and Monitoring Networks in the 'New Normal'
How Elite Analyst Teams are Transforming Security with Cyber Reconnaissance
More Webcasts
White Papers
A Technical Deep Dive on Software Exploits
2020 Threat Hunting Report
More White Papers
Reports
The State of Threat Detection and Response
The Drive for Shift-Left Performance Testing
More Reports