50%
Tweet
As Earth's closest neighbor and with an atmosphere more similar to Earth's than any other planet in the solar system, Mars has long been a subject of great interest to astronomers and the public. NASA began exploring Mars with unmanned spacecraft in the 1970s, and the space agency hopes to eventually send a human to the Red Planet. In March 2009, NASA and Microsoft partnered under a Space Act Agreement to make images of Mars and other planets available through Microsoft's WorldWide Telescope, an 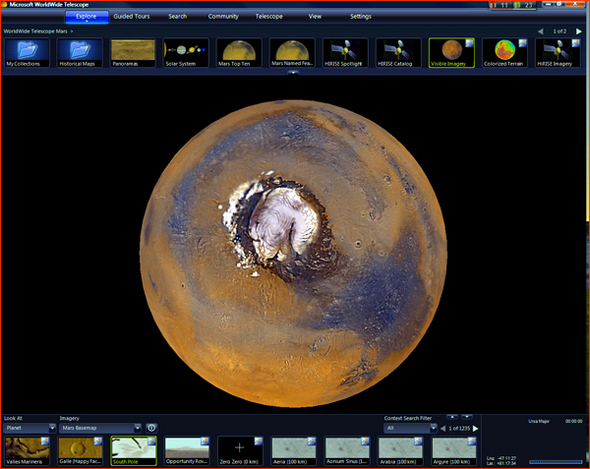 A view of Mars taken by the High-Resolution Imaging Science Experiment (HiRISE) camera on board the Mars Reconnaissance Orbiter. The Orbiter was launched in August 2005 to search the surface of the moon for evidence of the existence of water. It's equipped with a camera and other instrumentation used to analyze and record its scientific findings. The Orbiter's camera is capable of recording objects as small as a dinner plate, as well as gullies, channels, and other surface characteristics that could determine suitability for future landing sites. HiRISE images are taken from an altitude of 125 to 250 miles above the surface of the planet.

Now, this here number 5 picture tells me that "OWS" is in search of a valence.
Reply  |  Post Message  |  Messages List  |  Start a Board

If there's life, (intelligence) on mars, and visitors aren't wanted, our vehicles wouldn't last very long . It looks as though they have a goddess, or maybe a King David, but, If they have Any Brains, it's more than likely a school marm. It could also be Cains' house. That guy looking at the space vehicle looks interested , lets hope he ain't thirsty, It could also be, from his position in time, extreme fear.
Reply  |  Post Message  |  Messages List  |  Start a Board
Editors' Choice
Hot Topics

More Informa Tech Live Events
Now That Ransomware Has Gone Nuclear, How Can You Avoid Becoming the Next Victim?Emerging Security Threats Your Enterprise Should Be Aware OfWhy Performance Testing is More Critical Today