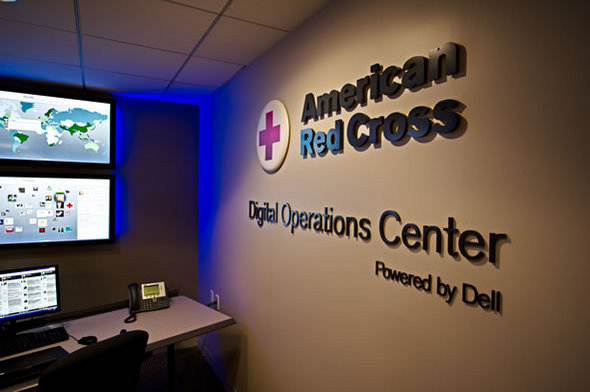 When might you need social media most? The day that a hurricane or tornado barrels through your neighborhood might be one powerful example. The American Red Cross believes that social media will play a growing role in disaster response, by providing real-time information and giving relief workers a direct line to affected individuals.

Even before the Red Cross' new Digital Operations Center officially opened on March 7, Red Cross officials used the center to reach out to individuals located in the path of danger. On March 2, dozens of tornadoes ripped through a 10-state region from Mississippi to Ohio, leaving 39 dead and thousands homeless, according to reports.

The center is part of an emerging trend of social media command centers that enable organizations to track and respond to public conversations about their efforts, their brands, and other topics of interest. Other examples of social media command centers include those run by Dell, Gatorade, one at this year's Super Bowl, and one operated by Intel at the Consumer Electronics Show.

Dell was a major partner in helping to launch the Red Cross' new center. In fact, the center is modeled after Dell's own Social Media Listening Center, launched in late 2010. Dell approached the Red Cross with the idea for the center, and has provided funding and equipment to get the effort off of the ground. Clemson University has also launched a Dell-based social media command center to provide hands-on experience to undergraduate students, as well as to facilitate graduate research and the university's business operations.

The Digital Command Center uses Salesforce.com's Radian6 social monitoring service, which Salesforce says is used by more than half of Fortune 100 companies. Radian6 pulls in social media content from platforms including Twitter, Facebook, and blogs, aggregates that data, and analyzes it. The Radian6 "engagement console" displays social media posts of interest to those working at the center.

Moving forward, the Red Cross plans to share information with other organizations, including the Federal Emergency Management Agency, and with volunteers in the field. For now, the effort is just getting started.