In the enterprise software world we spend a lot of time talking about the big guns -- Oracle, IBM DB2, SAP HANA, and the like. Those are critical as the foundations for large enterprise applications, but there are thousands of applications that organizations need that require a database, but perhaps not quite as much database as the big guns provide.

Let's talk about the database on a slightly smaller scale.

Once upon a time there were scores of PC-based databases, but that world has gradually shrunk. Today, there are only a handful used by a significant number of companies: Intuit QuickBase, Microsoft Access, and FileMaker. FileMaker, a wholly-owned subsidiary of Apple, has just released FileMaker 14, and it's worth taking a look to see what's new in this world of smaller databases.

The first thing to note is that FileMaker isn't an Apple-only platform.

One of the key considerations of both FileMaker and Access is that users can begin defining simple flat-file databases without knowing most of the inner database secrets required of the big databases -- and absolutely none of the SQL or other programming languages most database managers use. FileMaker 14 takes it even farther by presenting a set of "sample solutions" that you can use as a template for many common database applications -- things like contact managers, inventory programs, and even content-management systems. 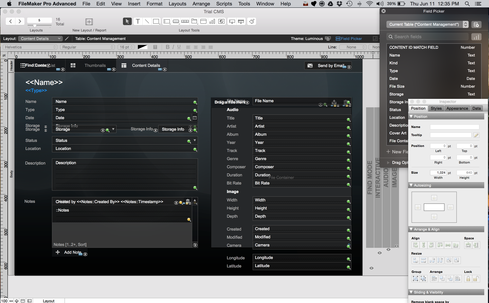 Once the data is defined, you can drop into the form designer and start selecting, dragging, dropping, and stretching all kinds of fields, boxes, shapes, buttons, and bars to create a screen that looks like the application you had in mind. Among the new features in FileMaker 14 are: the ability to add labels inside fields (to give users hints about what kind of data they should enter); new buttons and bars to make mobile apps look like, well, other mobile apps; and navigation buttons that help users move more easily between records.

Many of the new features of FileMaker 14 focus, in fact, on making it easier to create applications based on the database, with mobile apps a particular target. The new version adds features like enhanced signature capture using the mobile camera in iPhones and iPads. As with pretty much every other database and enterprise software system currently using more than one color for its display, FileMaker 14 has fully embraced a world in which most of its users will be handling touchscreens rather than keyboards.

FileMaker Go is the iOS app, available free from the Apple App Store. FileMaker Pro is the "basic" version for developing solutions, while FileMaker Pro Advanced includes more features and tools for building applications -- features such as debugging tools, encryption, the ability to customize menus and functions, and the ability to develop "kiosk" apps that have no menus or buttons with which to wander away from the defined forms of the app.

[Need the power of an enterprise in-memory database? Read SAP HANA: Not The Only In-Memory Game In Town.]

FileMaker Server (which runs on either MacOS X or Windows Server) is the platform for hosting apps that will be accessed by multiple users. As such, the pricing for FileMaker Server is based on client-side licensing.

I'll readily admit that I miss some of the simple databases available in an earlier, simpler time. If you need to build custom database applications that don't require the massive horsepower of the enterprise battleships, or if you want a database tool to give workgroups and departments the ability to develop their own applications, FileMaker 14 has a great deal to recommend it.

I'll have a hands-on evaluation coming soon. What sort of app would you like to see built as part of that article?

Curtis Franklin Jr. is Senior Editor at Dark Reading. In this role he focuses on product and technology coverage for the publication. In addition he works on audio and video programming for Dark Reading and contributes to activities at Interop ITX, Black Hat, INsecurity, and ... View Full Bio
We welcome your comments on this topic on our social media channels, or [contact us directly] with questions about the site.
Comment  |
Email This  |
Print  |
RSS
More Insights
Webcasts
Making XDR Work in Your Enterprise - May 12
Multi-Cloud Data Management for Modern Applications
More Webcasts
White Papers
Protection Strategies for a Cyber-Resilient Organization
Global software company contracts with CBTS for Virtual CISO
More White Papers
Reports
The InformationWeek 2021 State of ITOps and SecOps Report
Trustwave Global Security Report
More Reports