50%
Tweet
Canadian startup Bastionhost this week announced plans to build a secure campus of data centers that will be headquartered in an underground nuclear fallout shelter on the outskirts of Truro, Nova Scotia.

Canadian startup Bastionhost this week announced plans to build a secure campus of data centers that will be headquartered in an underground nuclear fallout shelter on the outskirts of Truro, Nova Scotia.The 64,000-square-foot site is one of seven Emergency Government Headquarters built across Canada at the height of the Cuban missile crisis known as "Diefenbunkers" because they were built during the era of then-Prime Minister John Diefenbaker. The 45-year-old facility, which was built to withstand an atomic blast and protect its occupants from nuclear fallout, features geothermal cooling, a sophisticated air-filtration system, and redundant backup power that Bastionhost is in the process of upgrading. 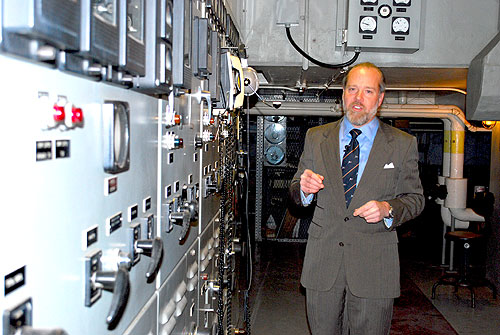 Anton Self, CEO of Nova Scotia-based Bastionhost, in front of vintage 1950's electronics panel in a
Cold War underground bunker his company purchased to use as a secure data center.
Photo courtesy of David TS Fraser

"Nova Scotia is directly between London and New York -- right on the great circle route," Anton Self, Bastionhost's founder and CEO, told InformationWeek. "This makes it the perfect location to cater to businesses on both continents from a single site, while taking advantage of multiple high speed fiber-optic cables already in place beneath the Atlantic Ocean.

Self says he sees Nova Scotia becoming an "information Switzerland" due to its central location between London and New York and the added advantage that Canada's strong privacy laws offer financial firms wary of the USA Patriot Act, which can complicate hosting in the United States for Canadian and European companies.

He noted that since the 9/11 terrorist attacks, U.S. laws have been changed so that on occasion security concerns trump privacy rights. "In the U.S., authorities can get a special subpoena and go into an office and seize what they want. In Canada, we have stringent privacy laws, both at the federal and provincial level, and we can offer our clients the right to due process."

"We see Atlantic Canada as a giant UPS between North America and Europe," Self says. "Our grid was completely unaffected by the blackout of '03 in the Northeast, and we do not experience rolling brownouts or power shortages."

Self didn't volunteer the bunker's selling price, but a local newspaper reported that it was recently assessed at $290,000 (C$), despite the fact that it cost the Canadian Defense Department $2.7 million to build in the 1960s.

U.S. entrepreneurs looking to emulate the Bastionhost business model might want to take a gander at a former Titan missile silo that's part of the former Larsen Air Force Base in central Washington. According to Data Center Knowledge, the 57-acre site has been twice listed on eBay, first in March 2004, when the list price was more than U.S. $3.9 million, and last year, when the asking price dropped to $1.5 million. The missile base in Washington is one of a number of former Cold War missile sites in the process of being converted into either data centers or ultra-secure underground residences, and being marketed at Web sites such as SubTerra and MissileBases.com.