50%
Tweet
NASA's high-flying science lab is on a long-term mission to assess the habitability of Mars with tools that include a drill, scoop, camera, and on-board testing. 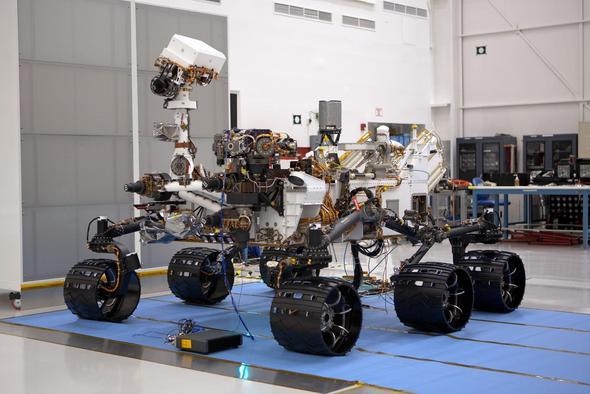 NASA's Mars Science Laboratory is in "good health" as it approaches its critical entry, descent, and landing phase, according to the space agency.

Earlier this week, NASA performed a memory test of software that helps control the spacecraft's descent, and configured the spacecraft for entry into the Mars atmosphere and landing. NASA had previously rebooted the primary and backup computers on the Mars rover, called Curiosity, that is part of the mission.

As the spacecraft approaches Mars, NASA is steering it toward its intended landing spot. On July 28, NASA used thruster rockets to reorient the lab's point of entry into the Martian atmosphere to a point about 13 miles from its previous course. The agency will have two more opportunities for course corrections, as needed, in the 48 hours before landing.

Curiosity is scheduled to arrive on Mars on Aug. 5 at 10:31 p.m. Pacific Time (Aug. 6, 1:31 a.m. Eastern Time). The rover carries the most advanced scientific gear ever used on Mars, designed to collect dozens of soil and rock samples during its 23-month stay. The goal of the mission, according to NASA, is to search for signs of microbial life, both past and present.

Curiosity stands out from earlier Mars rovers for its size. The car-like robot weighs more than a ton and requires a completely new way of disembarking on the Martian surface. Instead of an airbag-assisted landing, NASA will employ a "sky crane" touchdown for the rover. Curiosity is twice as long and five times as heavy as NASA's Spirit and Opportunity rovers, which launched in 2003. Many of Curiosity's design elements were inherited from those rovers, but Curiosity is the only one able to gather rocks and soil samples, process them, and distribute to test chambers onboard.

The Mars Science Lab launched from Cape Canaveral, Florida, on Nov. 26, 2011. Before Curiosity can touch down on Mars, it will have to overcome navigational challenges, including getting from the top of the atmosphere to the surface of Mars in seven minutes, which requires slowing from 13,000 miles per hour to almost zero in perfect sequence.

The spacecraft must be guided to its landing spot, the Gale Crater, while withstanding 1,600-degree heat. A supersonic parachute, the largest and strongest ever built, will slow its descent. Guided by rockets, the rover will use cameras to see where it will land.

I heard it was nuclear powered. Better than the solar in the previous landers, they had many problems due to dust and the Mars seasons. Not sure of the details of the power though.
Reply  |  Post Message  |  Messages List  |  Start a Board

this is very informative to be here
Also find information about NASA latest mission at:
http://tsbabur.blogspot.com/
Reply  |  Post Message  |  Messages List  |  Start a Board