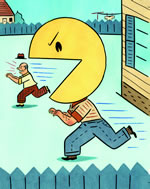 I just read that there is now a real-world version of "Pac-Man." How does that work? Do you have to scurry down alleys gobbling dots? And what happens if a ghost gets you?
— Curious in My Cube

Dear Curious:
Researchers in Singapore, for reasons best known to them, have come up with a real-life "Pac-Man" game. Instead of dots, the player picks up Bluetooth-enabled boxes. The game also involves GPS technology, head-mounted displays and inertia sensors. If a ghost catches you, you're required to stop making "wokka wokka" noises immediately, then make a sound like a church organ melting and wilt away to nothing. If the game is successful, the researchers plan to do the same thing with "Doom." If they start playing it in your neighborhood, get out. Get out now.

On a related note, a Texas rancher, John Underwood, wants to offer remote control hunting on his spread via the Internet. According to Reuters, he has already spent "$10,000 to build a platform for a rifle and camera that can be remotely aimed on his 330-acre southwest Texas ranch."

He told Reuters: "An attendant would retrieve shot animals for the shooters, who could have the heads preserved by a taxidermist. They could also have the meat processed and shipped home." No wonder Webvan failed! It didn't have rifles!

I've already burned through "Halo 2," and I'm bored again. Anything good out there?
— Twitchy Gamer

Dear Twitchy:
Check out "JFK Reloaded," the game that offends everybody by its very existence. If you like it, be sure to download "Manson Desert Adventure," "Overdose With Jimi!" and "The Jim Jones Kool Aid Chugalug," all thrilling adventures in nostalgia and extremely bad taste. If you're still bored, Twitch, you could always go outside and kick some puppies.

You're going to the wrong databases, Hunk. Check out IMDb, the Internet Movie Database. Designed primarily for film and television buffs, it's being used more and more by love-starved actors in Hollywood as a kind of romance filter. As aspiring actress Bree Turner told the British paper The Guardian: "It's the premier dating vessel for Hollywood. You can find out if the schmo is lying when he said he just wrapped Soderbergh's next feature or was the indie darling at Sundance. And you can see if he was an ex-porn-star because IMDb will [post] everything you have ever done on celluloid."

Maybe programmers could use a similar service-if they have time to date. In November 2004, an anonymous blogger calling him or herself "ea-spouse" appealed to the CEO of game giant Electronic Arts:

"When you keep our husbands and wives in the office for 90 hours a week, sending them home exhausted and numb and frustrated with their lives, it's not just them you're hurting, but everyone around them. When you make your profit calculations and your cost analyses, you know that a great measure of that cost is being paid in raw human dignity, right?"

Luckily, working conditions are much better here at Ask Dr. Data. My staff is asked to work only 80 hours a week, max, with comfy little steel cots that slide right under the desk. Any time they want a caffeinated beverage, day or night, it's theirs for a dollar. Of course, those are just the workers who haven't been outsourced. What happens in China or India is none of my affair. That's what raw human dignity is all about.

IAN SHOALES lives in San Francisco, where he is busy developing a real-life version of "Pong."