QlikTech may be the hottest and fastest growing company in business intelligence, but that growth is relative. For starters, the company had $120 million in revenue in 2008, so it has a way to go before it can play in the billion-dollar-plus big leagues along with SAP BusinessObjects, SAS, IBM Cognos and Oracle. More importantly, from a BI buyer's perspective, the vendor's QlikView software is typically deployed by smaller organizations with around 900 employees, according to The BI Survey 8 (see the "Median Customer Headcount" chart below). That's quite a bit smaller than the averages for larger and more established BI vendors. 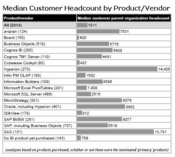 Median Customer Headcount By Product / Vendor
(click image for larger view)
Hoping to land bigger deals and ever-larger customers, QlikTech this week released QlikView 9.0, an upgrade of its in-memory BI platform laced with new features aimed at enterprise-grade deployments. Those features start with a battery of enterprise manageability improvements, including a visual administrative control panel that provides one view of all deployed QlikView servers. The vendor has bolstered load balancing and handling of large, complex and concurrent queries. Also new is a PDF Report Generation and Distribution feature that fills the production reporting role -- long a bread-and-butter staple for the larger BI suites.

These gaps had to be filled for QlikTech to win bigger deals, yet QlikView still doesn't the fit the mold of its larger competitors.

"The typical enterprise BI solution gives the masses PDF reports while the power users get analysis," says Anthony Deighton, QlikTech's senior vice president of marketing. "Our approach is to give everyone analytic capabilities by making it easy enough to do analysis without a lot of training."

But as The BI Survey 8 findings reveal, QlikView is most often selected as an alternative for departments and line-of-business units seeking a way around IT bottlenecks and corporate-standard products. Apart from fast analysis, a key advantage of its in-memory technology is that the building of cubes happens on the fly, as opposed to having to wait for IT to add new data and rebuild cubes.

Can QlikTech unseat well-established enterprise incumbents? "In some cases they may, and that's likely to be where customers either haven't kept up with the latest releases or within organizations where the business is moving too quickly to put up with IT bottlenecks," says Aberdeen Research Analyst David Hatch.

Despite the modest size of its average deployment, QlikTech points to 13,000-seat and 11,000-seat deployments at 3M and Pfizer, respectively, as proof that QlikView can handle bigger deployments. The vendor is not alone among alternative BI providers in pursuing larger deployments. Earlier this month TIBCO Spotfire released a 3.0 upgrade with beefed up data integration, systems management and scalability features, including load balancing and caching.

QlikView 9.0 includes other upgrades aimed at deployments of all sizes. A new Java Mobile edition, for example, supports BlackBerry, Symbian and other smart phone platforms that can run Java Virtual Machines. QlikTech already offers a mobile app specifically for the iPhone that supports its multi-touch interface and built-in GPS capabilities.

QlikTech has also introduced the capability for QlikView to run in the cloud, so BI customers can quickly test and scale deployments while QlikTech partners can offer QlikView-powered Web services. It's a hybrid deployment model that combines conventionally licensed software with the option of running cloud-based instances on Amazon EC2. The vendor says QlikView servers can be launched in as little as 15 minutes and just as quickly turned off, so you pay only for what you use.

"QlikTech is being very clear that this is not a SaaS offering and they are not coming out with a BI application that you can subscribe to," says Hatch of Aberdeen. "End users should think of this as running the software on the cloud rather than on conventional hardware. It will be interesting to see if companies want to take a build-it-in-the-cloud versus a [SaaS] buy-it-in-the-cloud approach."

Finally, QlikTech has added a freely downloadable Personal Edition of QlikView aimed at building a community of power users and developers who use QlikView to solve BI-related challenges.

"We often find that there are a few people inside organizations who are struggling to solve an analytic problem and need a way to get at and understand the data," QlikTech's Deighton says. "If we can solve their problems with this Personal Edition, we think it will open up bigger opportunities within those organizations."

Of course, with demand growing for QlikTech's style of BI, incumbent BI vendors are responding. Cognos did so by acquiring Applix and its in-memory TM1 product (before its own acquisition by IBM). SAP responded more recently by announcing SAP BusinessObjects Explorer, a blending of its in-memory Business Warehouse Accelerator and the Polestar search-style query interface.

So it looks like the big guns will be trying to play hip, alternative BI provider while upstarts like QlikTech and Spotfire are appealing to IT by presenting broader, enterprise-ready platforms.