12 Open Educational Resources: From Khan to MIT
(click image for slideshow)
Eric Lander is in the thick of lecture 15 for MIT's class 7.012, "Introductory Biology," his voice dropping and rising as he tells the story of recombinant DNA. Every now and then he glances over the heads of the students here in a third-floor auditorium in MIT's Building 46, as if something else has his attention.

Something else does: he's looking at the face of a woman who works for EdX, the MIT/Harvard consortium for open learning. The woman herself is sitting off to the side of the room, but her image is projected onto a teleprompter-like screen above one of the cameras filming Lander's lecture. She's the proxy for the 36,000 students registered to take the course online, people drawn by the chance to take basic biology from one of the world's most famous scientists, a leading researcher on the Human Genome Project.

Otherwise, he teaches the way he usually does. He interacts with the roughly 90 students in the room, sometimes digressing from his lecture notes to work through an interesting question a student raises. These digressions might get cut from the main lecture and turned into optional "shaggy dog" stories for the students online. He writes things on the room's sliding whiteboards. He calls up the occasional image on his laptop.

[ Do your employees need to learn new skills? Read Could A MOOC Ease Your Talent Problems? ]

Ironically, his in-person students cannot use computers during his class, to prevent them from falling prey to Facebook, chat sessions or even homework for other classes.

Introductory biology classes not being filmed for use as a massive open online course (MOOC) are taught in 55-minute sessions three days a week. Lander teaches his MOOC class from 7 p.m. until 9 p.m. two nights a week. Students get a free dinner beforehand outside the auditorium. Then he stays and records "bumpers," short video introductions to each class, to quizzes and problem sets and other components of the course.

Getting this course online requires immense effort for both MIT and EdX. On MIT's side, Lander tapped Michelle D. Mischke, a PhD in pharmacology who for the last 15 years has been technical instructor for the department of biology at MIT, meaning she develops problem sets and exams and works to support students day-to-day. 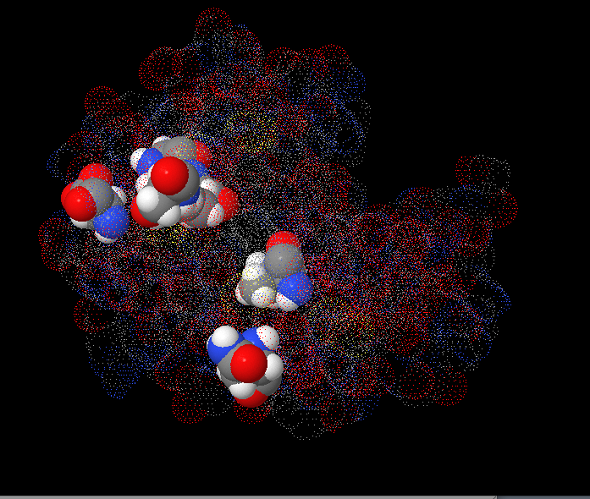 A rendering of the protein lysozome, with some of its amino acids highlighted. In the course, students can rotate it and zoom in or out.

Lander and Mischke first met in May 2012 to discuss developing a MOOC version of the course. "I said, 'this is an enormous undertaking, we need about three of me to even consider doing this,'" Mischke recalls. "He said, 'build the team.'"

To build out the courseware, she's hired a project manager, a curriculum development specialist and a programmer who is building things like problem sets that include three-dimensional models of proteins, which can be viewed from 360 degrees. She also has help from MIT biology graduate students.

For EdX, developing the course meant "double or triple our investment in any other course," said Rob Rubin, EdX's VP of engineering. It has a learning management system in place, but the needs of specific professors drive new features in it, and there's plenty of custom coding that needs to take place.

It was the first time a biology class had been taught on its platform, so EdX engineers had to build all the potential problem types that biology students would normally see on problem sets, to understand the economics of building the sets. Lander wanted to be able to go into the forums and take a good student answer to a basic question and "pin" it to the top of that discussion thread, so Rubin's team had to figure out how to build a pinning feature.

"It's a huge engineering and software development project to get our problems to work," admitted Mischke, who said the course's demands mean she spends probably another 40 hours a week on top of her normal job.

The course has six problem sets, plus a practice problem set, and many of those feature three-dimensional graphics. Some of the most complicated problem sets, such as the one that includes protein-folding simulations, can take close to 100 hours of development time. These are written in Java, and then converted into JavaScript by EdX. That conversion requires as much as another 60 hours of work.

EdX had to develop custom tools to make interactive, three-dimensional graphics work in browsers. It also helped develop a new tool called "deep dives" -- an in-depth look at parts of the course "where the students get hung up. We know this because (MIT students) are in our office all the time" asking questions, said Mischke. There are about two deep dives per week, each requiring about 10 hours of a graduate student's time to build, and EdX time to support and code.

No one is talking specific numbers for total development cost, but the project from scratch would probably cost hundreds of thousands of dollars. That's not counting Lander's time investment, which is significant. He, Mischke and her team met weekly over the summer to develop the course and its materials. He went in to EdX to review at least four different types of video technology to see what worked best for him, and went through coaching sessions to ensure he would do things like look at the camera. Now that he's lecturing he sometimes does not finish taping the "bumpers," the introductions to the various materials students will watch, until after 10 p.m.

Still, Lander volunteered for this, for two reasons. "It's giving us a chance to rethink the whole course," he said, still enthusiastic despite a full day of work followed by teaching and filming. He's also filming segments aimed at helping K-12 biology teachers use the material in their teaching. This came out of his role as co-chair of the President's Council of Advisors on Science and Technology.

"Great MOOCs being freely available to high schools will be an enormous service to American education," Lander believes.

He isn't sure his MOOC could be described as "great." "We have to recognize we don't know how to do MOOCs yet. They're highly experimental," he said. "I hope that four or five years from now we'll be embarrassed by how we're doing things now."

"We are in the early days in terms of experimentation," agreed EdX's Rubin, but he predicted that EdX will see big payback from this course. EdX will apply what it did for the forums and for problem sets to future courses, he said, and "biology courses will never be the same again."

Attend Interop Las Vegas, May 6-10, and learn the emerging trends in information risk management and security. Use Priority Code MPIWK by April 29 to save an additional $200 off All Access and Conference Passes. Join us in Las Vegas for access to 125+ workshops and conference classes, 300+ exhibiting companies, and the latest technology. Register for Interop today!

We welcome your comments on this topic on our social media channels, or [contact us directly] with questions about the site.
Comment  |
Email This  |
Print  |
RSS
More Insights
Webcasts
DevOps: Innovating with Speed, Security, and Quality
Making Zero-Trust Work for Work From Home
More Webcasts
White Papers
Container Security Best Practices: A How-To Guide
CyberSecurity Trends 2020
More White Papers
Reports
The Threat from the Internet--and What Your Organization Can Do About It
2019 Threat Hunting Report
More Reports
Copyright © 2020 UBM Electronics, A UBM company, All rights reserved. Privacy Policy | Terms of Service