Windows 10 and Cortana Analytics Suite were hot topics during a week when Microsoft also appointed a new company-wide president.

Windows 10 has been consistently popular in the Microsoft news cycle since it was first unveiled in January, and the discussion has not slowed since its July release.

This week brought even more updates, from a new Windows 10 Mobile preview build to news of an October hardware launch.

Windows Insiders in the Fast ring of Microsoft's Windows 10 Mobile preview program received Build 10536.1004 early this week. The release arrived after a considerable delay following the launch of predecessor Build 10512.

Microsoft's Gabe Aul took to the Windows Blog to explain the problems that kept Insiders waiting. The team had been in the process of addressing bugs in Build 10512 and continued to run into issues when testing new builds. The process of detecting, fixing, and testing numerous problems takes a while, wrote Aul, but now the new build is ready to roll.

When the lengthy download process is complete, Insiders can explore a few new and improved features in Windows 10 Mobile, including the Insider Hub, mobile hotspot functionality, two-factor authentication for text and phone, an updated Photos app, Quiet Hours/do not disturb, and pinch-and-zoom for Maps.

In other Windows 10 updates, Microsoft this week sent invitations to its Windows 10 fall hardware launch, which will take place on Oct. 6 in New York City. While it did not hint at specific devices set to release, the Redmond rumor mill is churning with ideas of what's in store.

Most industry watchers expect Microsoft to unveil a thinner, lighter, and faster Surface Pro 4, premium smartphones Lumia 950 and Lumia 950 XL, and an updated Microsoft Band. Some whispers have also mentioned a larger Surface device and update to HoloLens.

Microsoft CEO Satya Nadella put Cortana Analytics Suite (CAS) in the spotlight at Dreamforce 2015, when he announced it can be used with Salesforce.com. 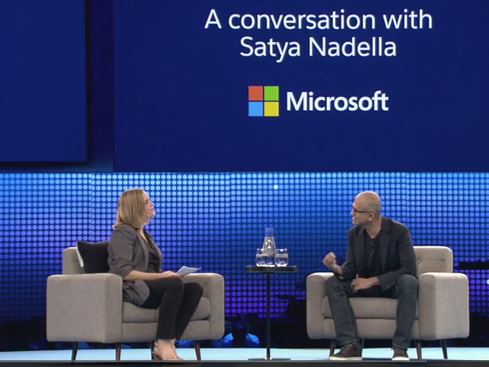 CAS is a cloud-based software tool designed to combine the Cortana voice interface with Power BI technology and machine learning. The suite, when used in conjunction with Salesforce and Alpine Metrics, could offer a way to leverage visuals and voice interaction for improved sales management.

While the onstage demo didn't quite go as planned, the idea has potential. Microsoft's Joseph Sirosh explained how sales forecasts traditionally depend on humans detecting customers who want to purchase. CAS eliminates the guesswork to provide better customer analysis and pinpoint customers most likely to buy.

If you're not using Cortana for business, you may soon be using it on the road. Microsoft is exploring the idea of building a heads-up display that would project onto the windshield of a vehicle. While the original report from the Taipei Times was thin on details, such an advancement would put Microsoft in the connected-car fast lane alongside Apple's CarPlay and Google's Android Auto.

On the executive side, this week brought news of Microsoft's first company-wide president since 2002. General counsel Brad Smith has been appointed president and chief legal officer. He will continue to focus on security and privacy issues in addition to his ongoing legal responsibilities.

Finally, Microsoft this week officially announced the end of Zune. If you thought Zune died years ago, you're not alone. The company had halted hardware production and eliminated the Zune branding in 2012. Unfortunately for the few still using their Zune devices, Microsoft will retire all Zune services.

Kelly Sheridan is the Staff Editor at Dark Reading, where she focuses on cybersecurity news and analysis. She is a business technology journalist who previously reported for InformationWeek, where she covered Microsoft, and Insurance & Technology, where she covered financial ... View Full Bio
We welcome your comments on this topic on our social media channels, or [contact us directly] with questions about the site.
Comment  |
Email This  |
Print  |
RSS
More Insights
Webcasts
Architecting Security for the Internet of Things
Succeeding With Secure Access Service Edge (SASE)
More Webcasts
White Papers
Exclusive IT Trend Report: Chatbots
The Benefits of Adding Cloud Telephony to Microsoft Teams
More White Papers
Reports
IDC FutureScape: Worldwide Digital Transformation Predictions
Building an Effective Cybersecurity Incident Response Team
More Reports