Unanimous ruling says that an "abstract idea" isn't patent-eligible just because computers are used to apply it.

In what some legal experts are calling a landmark decision that could make it harder to obtain and uphold business process patents, the US Supreme Court on Thursday unanimously rejected patents on abstract ideas implemented on a computer.

The high court's specific ruling applied to US patents held by Australian company Alice Corp. on a method for mitigating "settlement risk" on financial transactions. In its Supreme Court brief, the company argued that its method is patent-eligible because it involves "shadow records" updated in real time that "require a substantial and meaningful role for the computer."

But Justice Clarence Thomas, writing for the entire court, ruled that such an "abstract idea" isn't patent-eligible just because computers are used to apply it.

Like most Supreme Court decisions, this one's complicated -- and not clear cut. The high court's ruling referred to Section 101 of the Patent Act, which defines what's eligible for patent protection as those inventions or discoveries of any "new and useful process, machine, manufacture, or composition of matter, or any new and useful improvement thereof." The high court also reiterated the exceptions to that principle: "laws of nature, natural phenomena, and abstract ideas." 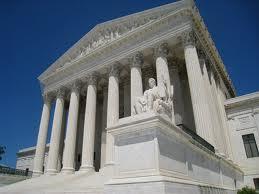 However, so as not to strike down thousands of existing business process and software patents held by technology and other companies, Justice Thomas wrote that the high court is treading carefully. Quoting a prior decision, Mayo Collaborative Services v. Prometheus Laboratories, the court reiterated that at some level "all inventions … embody, use, reflect, rest upon, or apply laws of nature, natural phenomena, or abstract ideas," adding that an invention isn't ineligible for a patent simply because it involves an abstract concept.

Justice Thomas indicated that the Alice decision isn't a repudiation of the concept of software patents. "There is no dispute that many computer-implemented claims are formally addressed to patent-eligible subject matter."

Nonetheless, "this is one of the most important intellectual property decisions in recent memory," says Robin Feldman, director of the Institute for Innovation Law at University of California Hastings College of the Law. Prof. Feldman says the Supreme Court's decision in the Alice case "eviscerated" the more accommodating approach taken by the US Court of Appeals for the Federal Circuit during the past 20 years in approving software and process patents.

"The Court sent a strong message with the Alice decision," Feldman said in an email. "Courts should ask first, what is the 'inventive concept' and is it simply an abstract idea? If it is an abstract idea, what have you added to transform it into something patentable? With the Alice patent, the Court held that the steps added were just well known routine processes. Many, many patents are drafted in the manner of the Alice patents. The question is whether the lower courts and the USPTO will pay attention. I suspect there will be cases ahead in which the Supreme Court says, 'We meant what we said.'"

The debate on software and business process patents goes back decades, grabbing headlines in the late 1990s as dot-com trailblazers sought patents on myriad software-based business processes. Priceline.com founder Jay Walker went so far as to form a separate company, Walker Digital, which hired lots of "inventors" to dream up ways to corner the market on minutia -- ways to automatically bill subscribers for magazine renewals, for instance, or relieve fast food customers of their spare change. Then came the patent trolls, companies formed with the express purpose of buying up existing (and often arcane) technology and other patents and enforcing them against unsuspecting, deep-pocketed infringers.

Today, most big tech companies play both sides of the patent issue: They hold valuable portfolios of patents that they enforce against rivals and other alleged infringers (Apple, Samsung, Google, Qualcomm, Microsoft, Oracle, and IBM are among the most vigilant); but they remain leery of the trolls and other opportunists.

As for process-oriented patents, the Supreme Court has rejected several of them in recent years. In 2010 it ruled against a patent on a method for hedging losses in the energy industry, for example, and in 2012 it rejected a patent on a method of measuring optimal drug dosages. Back in 2008, in the famous Bilski case, having to do with a patent on a method to hedge risk in commodities trading, the Federal Circuit Court ruled that for a process to be patentable, it must be "tied to a particular machine or apparatus" or must "transform a particular article into a different state or thing."

But in 2010, the Supreme Court reversed the Circuit Court's Bilski decision, ruling that the machine-or-transformation test can't be the sole test of process patent eligibility.

"Alice is a unanimous opinion, and it provides a much clearer path for courts to follow," she says. "There is still plenty to argue about, but the Supreme Court has carefully carved out a set of parameters across recent decisions. 1) Pre-emption is key. 2) What is the inventive concept (is there any 'there there'). 3) Just connecting it to a computer is not enough. 4) We are unimpressed with creative drafting -- what did you give us?"

Rob Preston currently serves as VP and editor in chief of InformationWeek, where he oversees the editorial content and direction of its various website, digital magazine, Webcast, live and virtual event, and other products. Rob has 25 years of experience in high-tech ... View Full Bio
We welcome your comments on this topic on our social media channels, or [contact us directly] with questions about the site.
Comment  |
Email This  |
Print  |
RSS
More Insights
Webcasts
Optimizing App Performance in the Cloud
Nip Ransomware in the FUD: Detecting Attacks Pre-Encryption
More Webcasts
White Papers
Why Add Security to Your Skill Set and How to Do It
Accelerate Threat Resolutions with DNS
More White Papers
Reports
Are Unprotected Cloud Databases Leaking Your Data?
Assessing Cybersecurity Risk in Todays Enterprises
More Reports

...that the Justices unanimously believe that our current patent regime is way too permissive (and I've long agreed) and intend to take the lead in forcing the standards up.  I don't see how business method patents can survive at all, and I strongly suspect that at least half of all software patents have just been rendered worthless.

Ideally, software patents would be abolished outright (they are, after all, de facto patents on mathematical algorithms) and functional claims would be entirely disallowed (how something is done is what constitutes an invention, not what is done).  I don't think the Supreme Court is going to go quite that far, but Congress should.  In any event, a return to a patent regime that makes it difficult to impossible for anyone to unintentionally infringe on a patent would be a welcome change.

There are many problems with this case.  First, they completely sidestep precedent.  Diamond v Diehr said that you shouldn't look to the novelty of any claim element when considering whether a patent claim is statutory.  If a claim does not read on mental steps, it should be statutory.  The Supreme Court has conflated the issues of obviousness (35 USC 103) and statutory subject matter (35 USC 101).  If the claim was so conventional, they should have just said it was obvious.  Why does there need to be a special test for software anyway?  Software is based on methods (instructions follow methods) and methods are statutory subject matter.  Software is one of the few areas where the U.S. dominates.  Why not just look at the underlying steps and see if they are novel or not?

In this case, the Supreme Court used Mayo v. Prometheus as a template and seem to say that automating a manual process is not suffient to meet the requirements of 35 USC 101.  In this case, though, by using a computer, the order of things could be changed and certain parties faced less risk due to the speed of the computer.  My summary of this case is included in my summary of the history of software patents at patentsusa.blogspot.com

The used Mayo v Prometheus as a template and seem to say that automating a manual process is not sufficient to meet the requirements of 35 U.S.C. 101. Why they didn't use 103 is anyone's guess. My summary is here: http://patentsusa.blogspot.com/ - See more at: http://patents.guru/u-s-supreme-court-decides-alice-v-cls/#sthash.RnuLAwAo.dpuf

IBM started weakening the patent system with its lobbying for patent reform.  Now even they think things are going too far.  They filed a brief against this outcome.  On the other hand, Google wants to continue to weaken the value of patents.  When you have a monopoly position, you do not need patents.  You already have your monopoly.  Patents provide a limited monopoly in exchange for disclosure.  On the other hand, patents can be used by others against Google.

TThe U.S. Supreme Court added clarity and certainty to the question of when software patents are valid. Not. Instead, they conflated the issues of obviousness and statutory subject matter. The used Mayo v Prometheus as a template and seem to say that automating a manual process is not sufficient to meet the requirements of 35 U.S.C. 101. Why they didn't use 103 is anyone's guess. My summary is here: http://patentsusa.blogspot.com/ - See more at: http://patents.guru/u-s-supreme-court-decides-alice-v-cls/#sthash.RnuLAwAo.dpuf
Reply  |  Post Message  |  Messages List  |  Start a Board

I certainly hope so. When you think about how much these patent lawsuits and trolls have cost entrepreneurs, innovation, and jobs, it's almost criminal. I like the idea of fining some of these 'companies,' -- those firms that exist solely to troll for so-called patent infringements -- when they lose a case. I realize it won't happen, but it's something that strikes my sense of justice. Let's hope this unanimous ruling provides some clarity in these very murky waters.
Reply  |  Post Message  |  Messages List  |  Start a Board

Agreed, and it's striking that it's a unanimous decision. We don't see many of those, so "we meant what we said" is likely spot on.
Reply  |  Post Message  |  Messages List  |  Start a Board

The Free Software Foundation (which opposes all software patent on general purpose computers) mocked these kind of business method patents for doing nothing more than adding "... on a computer" to a commmon business practice; they compared it to making a fortune cookie into a joke by tacking "in bed" onto it. While it's easy to mock patents this way ("I could've thought of that"), I do think this decision will strike most people as a common sense pull back.
Reply  |  Post Message  |  Messages List  |  Start a Board
Editors' Choice
Hot Topics