SAP customers have been hearing the company's "Hana offers dramatic simplification" yarn for more than four years. So what exactly changed with Tuesday's launch of Business Suite 4 SAP Hana, dubbed S/4Hana for short?

In a one-on-one interview with InformationWeek, SAP chairman and co-founder Hasso Plattner explained that all the advantages of Hana in-memory computing could not be realized with the SAP Business Suite of old. While the technical and performance improvements are compelling, the real questions for users center on the sub-applications of ERP (CRM, supply chain management, HR, project lifecycle, and management) that SAP will bring into S/4Hana, how soon the change will happen, and what industry-specialized capabilities it will offer.

To answer those questions, we have to first look at what's changed, and why the previous iterations of SAP Business Suite could not take full advantage of Hana's in-memory capabilities.

S/4Hana apps run without aggregates, indexes, materialized views, and multiple copies of data. The old SAP Business Suite required all that because it was designed to run on conventional databases that store all those interim views to spinning disks. Third-party databases including Microsoft SQL Server and Oracle have gained in-memory appendages, but they still maintain the aggregates and indexes of the past, creating yet more versions of the same data.

"The full benefits have not been there because the full data models [of the legacy apps] were still in the system," Plattner told InformationWeek. "Our own CFO had never worked on a system that operated without aggregates, so the idea of doing every single report and every P&L statement running through 250 million lines of data in memory scared him. S/4 Hana does this in less than two seconds."

In getting rid of all of those copies of data, all of which required storage capacity and processing cycles to keep all those spinning plates running in sync, SAP was able to simplify and shrink the underlying data model of the ERP suite.

So, what does this mean for users seeking simplification of their ERP systems? Yesterday we reported one version of that roadmap from Wieland Schreiner, executive VP of S/4Hana. But SAP clearly didn't do a good job of presenting a clear, consistent, and comprehensive roadmap, because comments and questions remain. 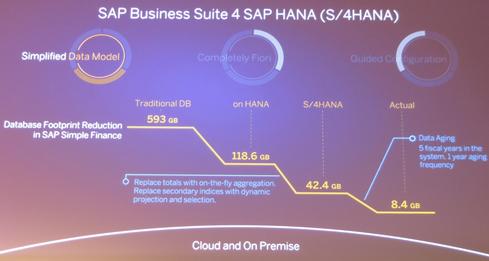 "S/4Hana finally brings a native solution that can demonstrate in-memory computing's business value," wrote financial analyst Jason Maynard of Wells Fargo Securities in a research note. "That said, we still think a coherent application rewrite across the entire application portfolio is needed to truly usher in a modern cloud suite."

Maynard's assessment seems to allude to one big question as to whether acquired cloud apps, such as SuccessFactors and Ariba, will move into S/4Hana or whether those functions will be rewrites of Business Suite apps. Which app you use to run and account for HR expenses, for example, is obviously a big deal.

Some executives waffled on this question and told us SAP could have it both ways, using virtual views to carry forward legacy apps. Schreiner told InformationWeek that SAP will favor the cloud-based apps over redeveloping legacy Business Suite apps that handle the same functions. If Schreiner's

statement is the reality, that's good news, since it means SAP will rationalize overlapping functionality that has crept into the portfolio as SAP has moved into the cloud.

Customers might question whether they really need this or that process to be 3X faster or 7X faster, but Plattner said that flexibility is as important as performance gains.

"When you introduce aggregated data, that has to follow rules," he explained. "If you want to change the rules -- how you build the reporting structure and hierarchies in a company -- it's a massive job for IT. If you have 50 reporting cubes in a BI system and management says, 'We want to do things differently,' it's a huge IT project -- particularly when you want to carry the history forward."

Because there are no spinning plates to keep in sync with S/4Hana, companies will be able to change profit-and-loss and reporting structures on the fly because they are virtual views, calculated in memory. Want to consider the financial ramifications of divesting of a business unit? No problem, according to Plattner. Want to change your P&L structure, the sales structure, or the org structure in the middle of the year? You can make the change or just analyze the differences in seconds, he said.

SAP customer Swiss Re confirms that these performance and flexibility gains are compelling. In August 2014, the global reinsurance company started piloting SAP Simple Finance -- the app that has formed the core of S/4Hana. Swiss Re CIO Markus Schmid told InformationWeek at Tuesday's launch event that he expects the company to deploy S/4Hana within a year.

Swiss Re piloted three use-cases for Simple Finance. One test validated whether the company could use a single Simple Finance system to report financials both in US GAAP (generally accepted accounting principles) and in an internal "Economic" view similar to IFRS (international financial reporting standards). Today, that requires two separate SAP Business Suite systems running on conventional databases. The pilot proved that one Simple Finance system could deliver both views.

"It's fulfilling the promises of simplifying the architecture and giving us quicker response times," said Schmid, a member of Swiss Re's global management board. Schmid said he expects S/4Hana will enable Swiss Re to collapse its quarterly financial close process from six weeks down to as little as one week.

Swiss Re's two other pilot projects looked at very common accounting requirements. In one use-case, Swiss Re tested whether Simple Finance could handle integrated cost-accounting processes used in services-based cost management. Like most big companies, Swiss Re has many cost centers and lines of business. The cost-accounting process allocates what share of taxes or the cost of capital, for example, gets assigned to which entity. Similarly, in the third pilot, Swiss Re tested whether Simple Finance could handle complex end-to-end reporting requirements across business units, product lines, and legal entities.

The pilots proved that "we can reproduce reports for all these different perspectives all on the same [S/4Hana] platform," whereas this previously required multiple reporting processes with many interim reporting steps, Schmid said.

Swiss Re's take is on the performance and flexibility benefits of putting financial management on S/4Hana. Yet to come are reports on what customers can do once HR, supply chain, logistics, project lifecycle management, and other aspects of ERP are available in simplified form.

Customer adoption of SAP's next-gen apps will depend on exactly what apps will be made available, to what degree they fit industries and companies, and, most importantly, what they will cost. But nobody seems to be questioning whether speed and flexibility -- both of which are enabled by in-memory simplification -- are benefits worth considering.

More than 500 respondents weighed in on their plans for DevOps, Agile, APIs, automation, and more. While traditional languages slide, newer options are filling the gaps. Meanwhile, everything from project management to automated deployment is happening more in the cloud. It's an exciting time -- but could we be moving too fast? Get the 2015 App Dev Priorities Survey report today. (Free registration required.)

Doug Henschen is Executive Editor of InformationWeek, where he covers the intersection of enterprise applications with information management, business intelligence, big data and analytics. He previously served as editor in chief of Intelligent Enterprise, editor in chief of ... View Full Bio
We welcome your comments on this topic on our social media channels, or [contact us directly] with questions about the site.
Comment  |
Email This  |
Print  |
RSS
More Insights
Webcasts
The Failures of Static DLP and How to Protect Against Tomorrow's Email Breaches
ROI and Beyond for the Cloud
More Webcasts
White Papers
Top Threats to Cloud Computing: The Egregious 11
From MFA to Zero Trust
More White Papers
Reports
Evolution of Ransomware Gangs
2020 State of Cybersecurity Operations and Incident Response
More Reports
Copyright © 2021 UBM Electronics, A UBM company, All rights reserved. Privacy Policy | Terms of Service