Rather than treat on-premises and cloud-based HR apps as two separate silos, SAP last year combined the two into one business unit and named Mike Ettling president, HR line of business. Formerly CEO of NGA Human Resources, a global HR and payroll services firm, Ettling is no stranger to HR, and he has experience with all the leading cloud and on-premises platforms.

Since its 2011 acquisition of SuccessFactors, SAP has built that vendor's Employee Central app into a complete cloud-based system that includes core HR and payroll services. What are the triggers of cloud adoption, and how does SAP stand apart from Workday and Oracle? Read on for Ettling's take on how HR deployments are changing.

InformationWeek: How has SuccessFactors evolved since it was acquired three-and-a-half years ago? 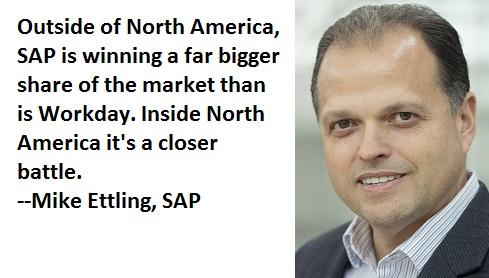 Mike Ettling (ME): It was a strategic HR offering back then, meaning it offered talent management, recruiting, learning management, and all the strategic requirements. Two and a half years ago [SAP] started building core HR in the cloud, which we call Employee Central. Overall, we've more than doubled the business in terms of revenue since it was acquired, and my goal is to double it again within three years. With core HR we've added 450 customers in two years. If you compare that growth rate to our competitor [Workday], they're now above 700 customers, but that took them eight years. We're clearly on a faster growth trajectory.

IW: What about Oracle?

ME: We don't see much competition from [Oracle] Fusion at all. We see a lot of competition still for [on-premises] PeopleSoft upgrades, but in terms of moving to the cloud, we don't come across Oracle too much in HR.

IW: Really? Oracle reports that HR is one of its hottest cloud categories, and they do have public numbers showing a sizeable SaaS business.

ME: I think a lot of the public numbers on SaaS aren't granular enough to break it down into specific functional areas -- HR, finance, supply chain, and so on. When I look at SAP deals and our opportunities, the number of times we're competing with Oracle is not very high.

ME: Yes, and in that space my view is that it's a two-horse race at the moment: SAP and Workday. We tend to see Oracle more when it's a PeopeSoft replacement, rather than SAP customers moving to the cloud.

IW: SAP CEO Bill McDermott and Oracle CEO Mark Hurd often cite wins against Workday during earnings calls. But Workday executives tell us wins against them by SAP and Oracle are typically for edge apps, such as talent, recruiting, and learning. Is that true?

ME: That comment is correct and incorrect at the same time. We sell end-to-end HR that has everything, or you can buy it in a modular fashion, which Workday doesn't do. We do have a huge number of cases where existing customers are adding talent management, recruiting, and learning to a core HR system that's on premises. That hybrid world is going to be a reality for many years to come. The competitor's rip-and-replace approach is not going to work for everyone. Most people want more of a risk-managed approach to migration.

At the same time, as I mentioned, our core cloud HR system, which replaces on-premises HR, has seen phenomenal growth to more than 450 customers in two years. We track and count those wins separately, and right now, particularly outside of North America, we're winning a far bigger share of the market than is Workday. Inside North America, it's a closer battle -- probably 50/50 at the moment.

IW: What's the typical size of those core HR deployments?

ME: SAP is predominantly focused on the enterprise market. Unlike Workday, which started in the small- to medium-sized business market, and are now trying to move up into the enterprise, when we started building Employee Central, we built it for the enterprise market. We have customers with more than 250,000 employees and multinationals that do business in more than 70 countries. I would say our average employee base is way higher than anyone else in the market.

IW: Can you cite some of those big, core HR cloud wins, particularly in North America?

Comment  |
Email This  |
Print  |
RSS
More Insights
Webcasts
Nip Ransomware in the FUD: Detecting Attacks Pre-Encryption
Cybersecurity's Next Wave: What You Should Know
More Webcasts
White Papers
Why Add Security to Your Skill Set and How to Do It
451 Cloud Confidence Report
More White Papers
Reports
Are We Cyber-Resilient? The Key Question Every Organization Must Answer
Assessing Cybersecurity Risk in Todays Enterprises
More Reports