Social media advertising, social media marketing, and social media engagement are the top three priorities for increased spending by marketers, according to a "2015 State of Marketing" report issued by Salesforce.com on Tuesday.

The priorities came as a bit of a surprise because Salesforce.com's "2014 State of Marketing" report had data and analytics, marketing automation, and email marketing as the top-three priorities while social-media marketing concerns came in fourth. What's more, 25% of those surveyed in 2014 saw social as "a critical enabler of products and services," but that number leaped to 64% in the 2015 survey.

So what changed? For starters, social channels have matured in their ability to deliver advertising to their respective audiences, according to Make Lazerow, chief strategy officer of the Salesforce Marketing Cloud. At the same time, advertisers are finding it increasingly difficult to reach the prized 18- to 34-year-old demographic through traditional avenues such as television.

"They can't count on programming like Friends and Seinfeld on Thursday nights anymore," said Lazerow in an interview with InformationWeek. "That's why Facebook is well on its way to $10 billion in revenue."

But independent data confirms Lazerow's point. PriceWaterhouseCoopers late last year released data showing that subscriptions to cable TV dropped about 6% last year from 73% to 67% among 25 to 34 year olds. These are the so-called "cord cutters" (or "cord nevers" -- those who have never subscribed to paid TV services). Social media, by contrast, cover more than 80% of the US population that's connected to the Internet, according to Networked Insights, a firm that analyzes consumer data from the social web. 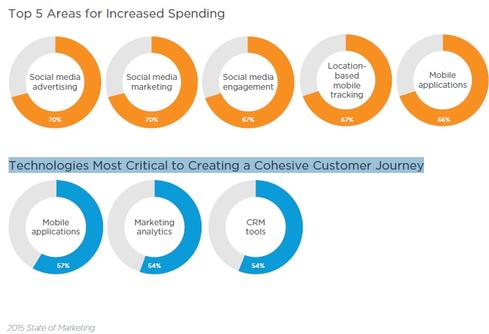 A vast majority (86%) of marketers say it's either critical or very important to create a cohesive customer experience across every channel and touch point, according to the Salesforce survey. Here, mobile plays a crucial role in that it's seen as the No. 1 technology critical to creating a cohesive customer journey (followed by marketing analytics and CRM tools).

"Mobile phones have set expectations from customers that you'll be there 24/7," said Lazerow. "They expect you to be able to serve them through any channel, and they assume that you know who they are."

At this week's National Retail Federation Big Show in New York, mobile is widely being described by retailer CIOs and vendors alike as the glue that will bring all channels together. The versatility of this most personal of computing devices is key. We carry our phones with us into stores, we use them for social interactions, we use them for brand and product research, we use phone-based apps to interact with companies, and we even call contact centers on the devices. Smartphones are also quickly becoming a payment mechanism.

The upshot of the report -- true to Salesforce messaging over the last two years -- is that mobile and social will continue to dominate the enterprise agenda in 2015.

Doug Henschen is Executive Editor of InformationWeek, where he covers the intersection of enterprise applications with information management, business intelligence, big data and analytics. He previously served as editor in chief of Intelligent Enterprise, editor in chief of ... View Full Bio
We welcome your comments on this topic on our social media channels, or [contact us directly] with questions about the site.
Comment  |
Email This  |
Print  |
RSS
More Insights
Webcasts
Zero Trust for a Work-From Home World
People Are The Most Important Part of Autonomous SOC
More Webcasts
White Papers
Sunburst: Impact and Timeline
MontanaPBS Shifts to Agile Broadcasting with Help from Raritan KVM Solutions
More White Papers
Reports
Improving Security by Moving Beyond VPN
How IT Security Organizations are Attacking the Cybersecurity Problem
More Reports

Young people are cutting the TV cord, but not the broadband pipe. Streaming services like Netflix, Amazon and Hulu are growing, showing that broadband comes frist while paid TV is optional. Dish Networks'new $20-per-month streaming TV service is aimed at 18-34 year olds who have  cut the cord or who never subscribed to paid TV.

These trends put the marketing focus on social and mobile. That's where the tech spending is going in 2015, according to the Salesforce.com survey.
Reply  |  Post Message  |  Messages List  |  Start a Board
Editors' Choice
Hot Topics