After years of anticipation, Microsoft Office for iPad arrives -- and it's just the beginning of a new push toward apps across all mobile devices, says new CEO Satya Nadella.

Microsoft CEO Satya Nadella on Thursday announced Microsoft Office for iPad. But the product, which some argue is two years overdue, was only part of Nadella's appearance, his first since succeeding Steve Ballmer last month. Microsoft also debuted a new Enterprise Mobility Suite to help IT professionals manage the barrage of devices and services employees now use for work. Nadella also promised that Microsoft would embrace cross-platform opportunities while continuing to sell its own devices.

Microsoft Office for iPad includes native versions of Word, Excel, and PowerPoint. They're available for free immediately through Apple's app store, though to do more than review documents, users will need an Office 365 subscription.

The recently-announced Office 365 Personal, a low-cost option that entitles users to the cloud-based software suite on one tablet and one PC, had been widely perceived as a harbinger of Thursday's iPad releases. But a Microsoft representative told InformationWeek that Office 365 Personal will not launch until later this spring.

In a demonstration of Microsoft Word for iPad, Office GM Julia White revealed more functionality than anticipated, including a ribbon interface that resembles the one in the desktop version, but with larger input areas to accommodate swiping fingers instead of clicking mice.

"It has all the satisfying features you'd expect," said White, adding that Microsoft worked to balance the iPad's touch interface with cues that would be familiar to all Office users. 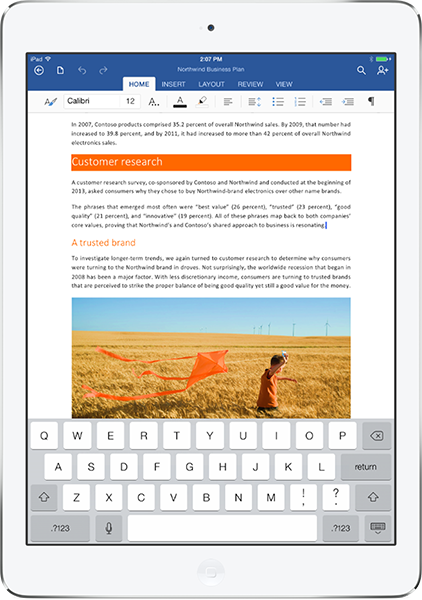 Microsoft Word on an iPad

White also demonstrated iPad versions of Excel and PowerPoint. Excel includes a special numeric onscreen keyboard and much of the desktop version's quantitative functionality, and PowerPoint includes a variety of touch-oriented presentation features. When an iPad is linked to a projector, for example, PowerPoint will display a "laser pointer" wherever the user presses the touchscreen. A similar function allows touch-based annotations, enabling the user to underline, circle, and otherwise emphasize onscreen elements during a presentation. 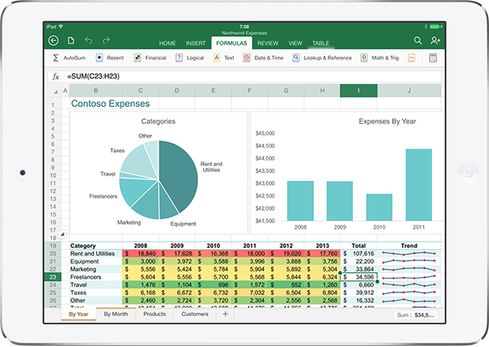 Microsoft Excel on an iPad

White also showed how Office 365 users can synch their files in One Drive, allowing them to enjoy document fidelity across devices and operating systems. Office 365 also enables real-time co-authoring on the new iPad apps.

Although Nadella did not specifically discuss Office for Android tablets, he promised Microsoft will deliver Office to all major platforms. Each will be uniquely designed for the host OS but also interoperable with other Office versions, he said.

Analysts predict iPad users could generate billions of dollars in additional Office revenue for Microsoft. Nadella took his time getting to the product reveal, though, instead focusing on the company's changing strategies.

"Everything we do going forward is grounded in a worldview of ubiquitous computing and ambient intelligence," he said, adding that future years "won't be defined by form factors we know and love today, but a variety of form factors that will come to be."

Nadella then transitioned to the "mobile-first, cloud-first" tactics he referenced last month on his first day as CEO. Mobility and the cloud both are necessary to upgrading user experiences; therefore, they must be viewed as a single, intertwined experience, he said.

To build that experience, Microsoft needs the support of not only users but also developers and IT managers. Nadella spoke at length about all three groups. He noted that Azure supports apps across numerous platforms and allows developers to build titles that include enterprise-friendly features such as Active Directory integration and single sign-on capabilities.

The suite also includes machine learning-based security features, said Andrew Conway, senior director of product marketing at Microsoft, in an interview following Nadella's presentation. Enterprise Mobility Suite will recognize that something is suspicious if, say, a single user appears to be trying to log on from two different geographies at the same moment.

In sum, Microsoft wants to offer "a cloud for everyone and every device," Nadella stated. He said Microsoft's Office agenda is "straightforward: Make sure users have access to high fidelity experiences on every device they want to use."

Some industry watchers have speculated that the release of Office for iPad will eat into sales of Windows tablets. Until now, Windows tablets had been the only tablets to natively support Office. Nadella did not address the topic explicitly, but he closed his appearance by declaring that Microsoft's cross-platform strategies are not "a tradeoff."

"It's about the realities of our customers," he said, repeating his strategy of delivering high-quality experiences across device types, operating systems, and usage scenarios.

"And what about Windows?" he asked. Noting that Thursday's event was not meant to cover Microsoft's entire strategy, he said to expect more information about Windows and devices next week at Build, the company's conference for developers. "We have a massive agenda. We will innovate," he promised.

Michael Endler joined InformationWeek as an associate editor in 2012. He previously worked in talent representation in the entertainment industry, as a freelance copywriter and photojournalist, and as a teacher. Michael earned a BA in English from Stanford University in 2005 ... View Full Bio
We welcome your comments on this topic on our social media channels, or [contact us directly] with questions about the site.
Comment  |
Email This  |
Print  |
RSS
More Insights
Webcasts
How Elite Analyst Teams are Transforming Security with Cyber Reconnaissance
ROI and Beyond for the Cloud
More Webcasts
White Papers
A Practical Guide to SASE Migration
The Insecure State of Microsoft Teams Security
More White Papers
Reports
Assessing Cybersecurity Risk in Todays Enterprises
Are Unprotected Cloud Databases Leaking Your Data?
More Reports

I tend to agree that enterprise-level adoption will be pretty high. For consumers, unless they're already subscribing to Office 365, $99 a year may seem pretty steep to buy in.

I've only just started poking around the new apps, but I'm liking what I see so far. I would love to see an integration to other online storage services, but I can understand Microsoft's preference for OneDrive.
Reply  |  Post Message  |  Messages List  |  Start a Board

I think Microsoft definitely left money on the table by waiting this long. But given how overdue the product was, I think these apps are pretty darn good. I fully expect this suite to become the standard for iPads in the enterprise, and to contribute billions of dollars to Microsoft's bottom line.

But consumers are a tougher call. They present most (but not all) of the money Microsoft has potentially already forfeited. A few years ago, if Office for iPad had been available and priced reasonably, many iPad users would have simply purchased it. Alternatives wouldn't have had space to gain traction. But today, a lot of iPad users have embraced these alternatives for their word processing, spreadsheet and presentation needs. Office is better than these alternatives in most ways-- but the alternatives are legitimately free, not "freemium." These Office apps are going to be really useful for reviewing and modifying existing content, but I don't think you'll want to use them to originate much. If you're constantly collaborating or frequently reviewing documents, then these apps look terrific. If you don't do that stuff very often, your existing tactics might be good enough.
Reply  |  Post Message  |  Messages List  |  Start a Board

A good step forward.  I really wish they had included an Outlook app.  The issue now will be if it is too little too late and whether the Office 365 subscription and OneDrive restrictions hamper adoption.
Reply  |  Post Message  |  Messages List  |  Start a Board
Editors' Choice
Hot Topics