The newest version of Office is designed for consumer and business users alike. So, which new features will matter most in the enterprise? Here's a look at the ones you'll really want for work. 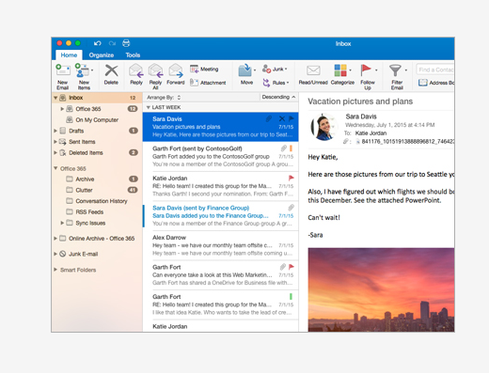 Microsoft rolled out its updated Office 2016 suite and several updates to Office 365 a little more than a month ago. Both have been revamped to focus on team collaboration as opposed to individual productivity.

Many of the features built into Office 2016 are meant to span consumer and business users. However, it's clear that several capabilities are more useful for enterprise needs.

Office has undergone some major changes in 2015. Microsoft is pushing its cloud-based Office 365 subscription offering, launched the productivity suite on Apple and Android devices, and is making apps free for smaller displays.

There's a chance you haven't yet been able to use the newest Office 2016 in the workplace. Some enterprise customers prefer to test new features for compatibility before rolling them out to employees. These organizations opt out of the "Current Branch" update process and its automatic upgrades; they instead deploy Office through "Current Branch for Business."

Under the more secure business plan, enterprise customers receive three Office builds per year. They'll wait until February 2016 to receive the first Current Branch for Business build of Office 2016, which will include the updates received by Current Branch customers in September.

When business customers are able to download the suite, they'll find that Office 2016 and its cloud-based cousin, Office 365, are reminiscent of older versions but with a modern, collaborative twist.

Once you've reviewed the business-oriented features in the new Office, tell us what you think in the comments section below.

Yeah thats right, anyway this office is really better than the previous one in my opinion
Reply  |  Post Message  |  Messages List  |  Start a Board

@tzubair I would say each time I see new office rolled out... I always ask what they where thinking....
Reply  |  Post Message  |  Messages List  |  Start a Board

Thank you very much for providing a good summary of what to look forward to with Office 2016.

What I really like is they are integrating collaboration features that usually requries other applications/extensions to be installed.

@TerryB, I'm not sure as we use Office Pro as well, and I use the Home version of Pro offered by the MSFT Home Use Program, which is essentially the same. But, the theme I keep seeing in this article is that the Office 365 Program Manager keeps speaking about the features of the Office Pro Suite and that's my guess as to why the focus is the Cloud...there must be some new cross-fuctional teams deployed in Redmond.
Reply  |  Post Message  |  Messages List  |  Start a Board

@vnewman, I don't know much about Office 365, we are on premise installed Office. Does using Office 365 come boxed with cloud storage? Couldn't you use the software from internet but save documents locally? Or is that impossible to enforce in Office 365?

I just chuckle everytime I see statements like "MS is encouraging people to use Office 365". Well of course they are, recurring revenue forever is a much better business model for them. :-)  We used Office 2000 from about 2001 until Corp finally upgraded to Office 2010 a couple of years ago. I don't think 2016 version is close to their radar yet. Maybe Office 2020. :-)
Reply  |  Post Message  |  Messages List  |  Start a Board

"people really hate when Microsoft tries to think for them and "learn" anything about their behaviors because they usually get it wrong."

@vnewman: I totally agree. I doubt if Microsoft has ever gotten someting right in the first attempt. Normally it takes a few iterations for them to come up with an acceptable product that excites users. Be it Windows 7 or Windows 10 or Office 2016, the same rule applies.
Reply  |  Post Message  |  Messages List  |  Start a Board

"We really want to encourage people to embrace the cloud."  Except for all the bank, government, healthcare, legal services, etc firms who would be fired if they ever stored any attachment with SSNs, Credit card info, loan numbers in the cloud.
Reply  |  Post Message  |  Messages List  |  Start a Board

This is a great column for Halloween season :).  "Clutter" will need to be "decluttered" from our Enterprise migration - people really hate when Microsoft tries to think for them and "learn" anything about their behaviors because they usually get it wrong.
Reply  |  Post Message  |  Messages List  |  Start a Board

"Microsoft is pushing its cloud-based Office 365 subscription offering, launched the productivity suite on Apple and Android devices, and is making apps free for smaller displays."


I think that's a very important step that Microsoft has taken over the years. They were too proud earlier on to launch anythingn for a platform that wasn't their own. Later on, they realized their mistake and started making the flagship product available for other platforms. I think this is a late decision but ceratiainly a very good one.
Reply  |  Post Message  |  Messages List  |  Start a Board
Editors' Choice
Hot Topics