This week brought Microsoft's NYC store opening, a facelift for Outlook on iOS and Android, and the general availability of Surface Book and Surface Pro 4.

Microsoft kicked off this week's news cycle in New York City, where it held the grand opening of its largest flagship store, located on 5th Avenue. The massive retail space measures five stories and 22,269 square feet.

Its first three floors contain several tables with untethered test devices, a theater for hosting workshops and classes, and an answer desk for troubleshooting problems. The fourth and fifth floors will reportedly be used for administrative offices and for events, respectively.

The store's opening on Oct. 26 coincided with the first day of general availability for the new Surface Pro 4 and Surface Book. Both devices were unveiled in early October during Microsoft's Windows 10-focused hardware launch.

[Kangaroo: The Windows 10 PC that fits in your pocket.]

Microsoft is positioning the Surface Book, its first laptop, as a direct competitor to Apple's MacBook Pro. If there was any doubt about this, it was eliminated when Redmond announced its "Mac to Surface Book" campaign this week.

That's right: Microsoft has launched a new website specifically intended to inform current and future Surface Book owners of ways they can make the switch from Mac. The site has tips on Windows 10, transferring files, and using Surface Book with iPhone, iCloud, and iTunes. It claims the Apple smartphone and Microsoft laptop "will go great together."

Both mobile Outlook apps for iOS and Android are getting facelifts. Outlook for iOS, which will include more prominent icons and a revamped calendar, is currently available. The Android-compatible version, which more deeply leverages Google's Material design, will be available in early November.

There are several additional updates on their way to Office customers. Starting in November, Skype voice and video integration will be available throughout Office Online in Word, Excel, PowerPoint, OneNote Online, and Outlook.com. Microsoft promises this will also eventually be available in desktop apps. 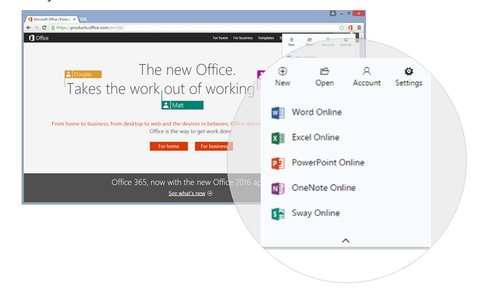 A new Google Chrome extension provides access to Office Online so you can create and open documents in Word, Excel, PowerPoint, Sway, and OneNote directly from the browser. It can also be used to view Office docs stored in OneDrive, OneDrive for Business, or on your PC.

The Office for Android apps now have a 40% smaller footprint and a faster registration and sign-in process. They also have enterprise support for Android M. They're also compliant with Android for Work.

For IT admins, Microsoft shed some light on the future of its enterprise software System Center Configuration Manager (SCCM). Upcoming changes will address how SCCM will support the software-as-a-service model of Windows 10.

The new SCCM, first announced at this year's Ignite conference, will have full support for the deployment and management of Windows 10. It's intended to send updates at a faster pace to keep up with the accelerated feature delivery for Windows 10 and Microsoft Intune.

The idea is that businesses will have a simpler upgrade experience and faster access to new additions to Windows 10. This process will also accelerate the delivery of innovations for iOS and Android when individuals and organizations use the Configuration Manager for mobile device management or mobile application management.

Kelly Sheridan is the Staff Editor at Dark Reading, where she focuses on cybersecurity news and analysis. She is a business technology journalist who previously reported for InformationWeek, where she covered Microsoft, and Insurance & Technology, where she covered financial ... View Full Bio
We welcome your comments on this topic on our social media channels, or [contact us directly] with questions about the site.
Comment  |
Email This  |
Print  |
RSS
More Insights
Webcasts
People Are The Most Important Part of Autonomous SOC
Don't Miss This Cybersecurity Virtual Event
More Webcasts
White Papers
How to Build Your Incident Response Plan
Gartner Market Guide for Insider Risk Management Solutions
More White Papers
Reports
Improving Security by Moving Beyond VPN
Accelerate Threat Resolutions with DNS
More Reports

One of the good information for outlook support . There is better alternative available at 25dollarsupport.com.Cheap and best. My favourate !.
Reply  |  Post Message  |  Messages List  |  Start a Board

This is one innovation I was waiting for, an online version of Microsoft Office is incredible. No more losing your important documents just because MS Excel crashed.
Reply  |  Post Message  |  Messages List  |  Start a Board

At first all I wanted to talk about was the flagship store (quickly: I think the event + sales layout is a great idea to get people excited about microsoft as a 'brand' again - classes highlight the professional + consumer combo appeal), but wow, that's a lot of Office-related news! I thought the initiative was a great idea to begin with - we have an environment where many businesses still trust Office (often only Office) for 'official' use but users often go to more streamlined, mobile options for 'unnofficial use'. Trying to go with the flow and capture that audience back with lightweightness and UI improvements instead of fighting it seems like the way to go.
Reply  |  Post Message  |  Messages List  |  Start a Board
Editors' Choice
Hot Topics