50%
Tweet
Microsoft CEO Satya Nadella proves he can be a man of action with the biggest layoff in company history and other concrete steps to reshape Microsoft. Now what?

They say talk is cheap, but that's not necessarily true if you're Microsoft CEO Satya Nadella. Microsoft stock is up more than 20% since he took over in February and has reached heights never attained under predecessor Steve Ballmer. Microsoft released lots of products during that period, but if you look at what people were really responding to -- at the things for which Nadella was responsible -- it was Nadella's language.

Now it's more than talk. With the announcement of 18,000 layoffs, Nadella has shifted into action. He's no longer reshaping, tweaking, and re-contextualizing what Steve Ballmer left behind, or making the sorts of moves that can remain invisible to outside observers. He's now begun remaking Microsoft according to his vision, and in so doing he's moved to a new stage of leadership, one where actions will increasingly speak louder than words.

It's a big step up from his early days as CEO. Nadella's been justly praised, but it's hard to know how much different Microsoft's product line would look if Ballmer were still in charge. On his way out, the former CEO reportedly gave the go-ahead on Office for iPad, for example, and one assumes Microsoft would have continued to beef up Azure under Ballmer, just as it has under Nadella. That's not to say Nadella hasn't exerted his authority. He reportedly axed the Surface Mini at the eleventh hour, and a lot of the cloud momentum Nadella's currently hyping stems from work he oversaw in earlier roles.

[Does Satya Nadella have Microsoft back on track? Read Microsoft Faces 4 Big Challenges.]

Still, almost everything Microsoft released during Nadella's early reign was already well into development under Ballmer. Nadella didn't bring new products; he brought new packaging for those products, new strategic sensibilities, and a new business vocabulary. His poetic delivery and hipster attire contrast sharply with Ballmer's salesmanship and bombast, a PR victory all by itself.

But by early July, Nadella's rhetoric had begun to grow repetitive. He'd been recycling key talking points to developers, partners, and other key constituencies as he wound his way through Microsoft conferences and events. A recent press tour engendered a lot of goodwill. But as his description of a cloud-driven world full of personalized digital experiences grew more familiar, the topics he wasn'taddressing became more obvious. 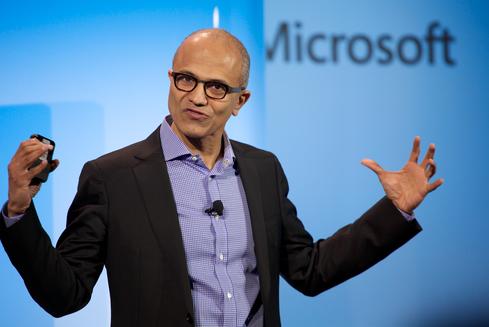 Before the layoffs, Nadella appeared almost pre-emptive in his references to first-party smartphones and tablets, for example. They were normally limited to enthusiastic platitudes about the Pro 3, or vague intentions to integrate Nokia and build the Windows Phone market, with help from partners. He seemed to bring up devices, not only to assure audiences that Microsoft hadn't forgotten about its challenges, but also to stop the conversation before it started.

Layoffs seemed inevitable; Microsoft was already undergoing a restructuring effort when Ballmer stepped down, and in absorbing Nokia's device business Microsoft took in some skills overlap that had to be consolidated. But it did not seem inevitable that Nadella would enact the largest job reduction in company history. Even not counting the Nokia layoffs, 5,500 other job cuts -- which included changes to the Windows team and its testing process -- constitute Microsoft's second-biggest layoff ever. It's not clear if these efforts to make

"The newer generation the millenials are being deprived of entry level white collar jobs, call center jobs, accounting jobs, but especially dangerously, excluded from IT career."

The latest shellshock and heartbleed are only the tip of iceberg when it comes to American insecurity.  Lack of diversity/duoculture in computer systems and the aging of American nerd workforce are both driving American IT off a cliff.  The newer generation the millenials are being deprived of entry level white collar jobs, call center jobs, accounting jobs, but especially dangerously, excluded from IT career.  This will have catastrophic consequences if left to continue.
Reply  |  Post Message  |  Messages List  |  Start a Board

I agree with the insecurity point. People overlook it because they feel insecure about technology in general. I don't think there will ever be a point when you can feel 100% safe when it comes to your information.
Reply  |  Post Message  |  Messages List  |  Start a Board

We could say it's capitalism at its best and idly watch the process to continue.  But the patient will shortly die from this cancer of the brain, and the death will be fast, incomprehensible and catastrophic.   Exponential growth always beats linear growth, everytime and everywhere.   Americans won't even know what is hitting them.   Look at JPM Chase, Ebay, Target, Homedepot, Albertson, Goodwill & Cisco.   The underlying cause of information insecurity and future insecurity are hardly touched by any media.
Reply  |  Post Message  |  Messages List  |  Start a Board

Unfortunately, that's the case for everyone, Americans included. The Indian businessman just found a soft spot in the American businessman's wallet: savings. An they capitalized greatly. If anything, you could say that's capitalism at its best.
Reply  |  Post Message  |  Messages List  |  Start a Board

Currently it alone has 10,000 H1b visa labor in the US.  Over the past 15 years, all the Indian contractor giants imported ~1000,000 Indians into the US to occupy and "upgrade" American's IT brain.

BTW, Chase was hacked last week.  What does Chase, Target, Ebay, Michaels, SuperValu, Healthcare.gov, California healthcare exchange have in common?  They all laid off their American workers and outsourced their IT department to Indians and India; and they all were breached or failed miserably.   Admit it, Indians don't care about American information security and American jobs.  They care about money.

An Indian guru came to an American saying: You are dumb.  Let me replace your brain with a new IQ=200 brain...  For rupees!    Does American take him up on his generous offer?   Yeah, it's hugely embarrassing, but we did.
Reply  |  Post Message  |  Messages List  |  Start a Board

Wow I've heard of Wipro before & didn't know they're offshore. I just checked their website to see what they specialize in. They claim to have over 143k employees. That seems a little exaggerated but probably not since they're publicly traded. Interesting.
Reply  |  Post Message  |  Messages List  |  Start a Board

Check out this org:  connect-goal.com/

They claim that the growth of legal outsourcing industry in India is exponential.
Very likely it's true: google "india legal outsourcing". You will find lots of good in-depth coverage, some from NYT.
Yet no one is raising alarms, likely because the lawyers have the same sense of security and complacency as the software engineers 10 years ago.   If they saw what happened to the American software engineers and connected the dots, they'd probably think twice about this "exponential" outsourcing of this key American industry central to American democracy.

Microsoft also outsource its IP legal department. google "wipro microsoft outsource IP".  It has become a zombie American brand with 80 billion dollar cash to be robbed blind by its suave PPT masters and turned into a giant cuckoo hatchery.  Same fate as befallen Cisco, check out Cisco's recent announcement (bradreese blog: every division with falling or stagnant sales and apparently preparing to sack the survivor nonIndian engineering leader of one of the few growth divisions).   Entire America will suffer the same fate if unchecked.

Wow I didn't know about the legal outsourcing. That's a little odd, isn't it?
Reply  |  Post Message  |  Messages List  |  Start a Board

I don't think most Americans understand how dangerously critical the IT situation is.   It's not just a job issue, IT only has 2 million jobs and it's already 50% Indian occupied through the H1b abuse.   The critical problem comes from the dried up American talent pipeline and the national security issue down the road.   We are seeing IT drastically transforming every traditional industry( including policing, military, health, accounting and law).   Yet we are writing off our own young's future and allowing our IT to be taken over by a foreign force with secret agenda, and who has no regard for American values of democracy and equality.

I'm also concerned about the now widespread practice of low end legal process outsourcing into India.   I antipate a day when Indian law school grads will be taking American bar exams and begin practicing as American lawyers (using the IT game plan to squeeze out next generation of American lawyers).   When the Indian lawyers reach a critical mass, they will be able to defend and legitimize this giant take-over of American democracy, which began with exporting millions of entry-level white collar jobs, now into the stage of a quiet IT take-over without resistance, to end with the take-over of American law, legislature and government.


Their game plan is brilliantly and discretely executed judging from the general lack of American awareness.  I got to admire their audacity.   Back to Microsoft, the rounds of layoffs are still ongoing.   Watch Cisco (recently announcing another round of layoff of 6000 people) for a taste of Microsoft's future.  Cisco is in advanced stages of layoff-worldwide-hire-Indians-at-the-same-time and its cash hoard of 50 billion (mostly offshore) dollars will be raided by its Indian cadres, who are clamoring for the Indian CTO to be promoted to the CEO spot.
Reply  |  Post Message  |  Messages List  |  Start a Board
Page 1 / 4   >   >>
Editors' Choice
Hot Topics