The purchase of Incent Games and its sales gamification platform FantasySalesTeam will help Microsoft drive CRM adoption and team competition.

Microsoft has snapped up yet another company, and this time its focus is on improving sales.

The tech giant has announced its acquisition of Austin, Texas-based Incent Games Inc., the parent company behind sales gamification platform FantasySalesTeam. Sales departments can use the software to organize contests similar to those in fantasy sports leagues.

Microsoft intends to leverage the platform to drive productivity, revenue, and CRM adoption through team-based collaboration and competition.

Many sales organizations have incentive programs, but these often cause team members to lose enthusiasm when the same employees consistently come out on top. FantasySalesTeam aims to boost company-wide engagement by adding a competitive twist and helping employees in other departments (such as marketing, operations, and finance) become invested in sales' success.

If you're not familiar with fantasy sports, here's a quick rundown of how the platform operates:

After setting up basic structure (sport theme, length of competition), a sales organization defines the sales metrics it wants to reach and the points associated with achieving certain goals. For example, 10 calls will earn one point; securing a customer can earn three.

From there, sales reps are assigned "player" positions based on their performance and the organization associates different prizes with various levels of achievement. Reps can create teams by "drafting" coworkers, who all become invested in earning points for their team.

Microsoft plans to integrate the FantasySalesTeam platform into Dynamics CRM with the goal of driving CRM adoption and results for sales organization. Its blog calls attention to two of several case studies in which the product enabled significant sales upticks at Service Corporation International and Wireless Zone.

Service Corporation International, for example, ran a pilot of the software among 130 sales reps and compared their performance to another group of nearly 700 reps. Those using FantasySalesTeam closed an average of 88% more deals at 213% the average contract value, Microsoft reported. 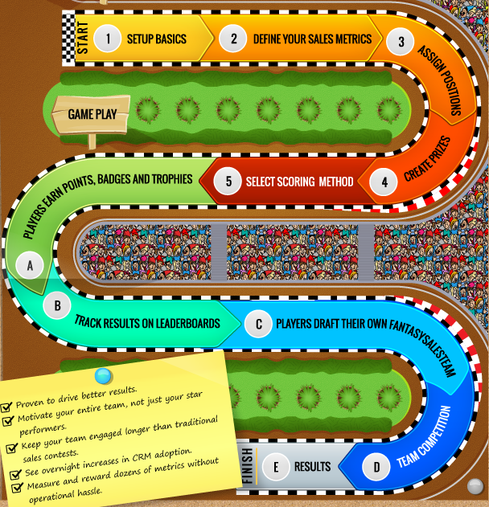 The company has noted it will integrate and offer the FantasySalesTeam platform through Dynamics CRM "in the coming months." It will continue offering support to customers using FantasySalesTeam with other CRM solutions. In the future, Microsoft plans to look beyond sales and explore the possibilities of applying the platform to other areas of the enterprise.

Microsoft's Incent Games acquisition is the latest in a series of investments intended to help it compete as a modern tech company. Towards the end of July, it dropped $320 million on Israeli cloud security firm Adallom.

On the productivity front, earlier this year we saw Microsoft purchase email app Acompli shortly before the release of Outlook for iOS and Android. A few months later, it targeted mobile productivity with its acquisition of Wunderlist.

Kelly Sheridan is the Staff Editor at Dark Reading, where she focuses on cybersecurity news and analysis. She is a business technology journalist who previously reported for InformationWeek, where she covered Microsoft, and Insurance & Technology, where she covered financial ... View Full Bio
We welcome your comments on this topic on our social media channels, or [contact us directly] with questions about the site.
Comment  |
Email This  |
Print  |
RSS
More Insights
Webcasts
Making Cybersecurity Work in Small and Medium-Sized Businesses
ROI and Beyond for the Cloud
More Webcasts
White Papers
How to Prioritize Risk Across the Cyberattack Surface
Two-Factor Evaluation Guide
More White Papers
Reports
How IT Security Organizations are Attacking the Cybersecurity Problem
DNS Network Traffic Volumes During the 2020 Pandemic
More Reports