Microsoft Undersea Cables Are Really About The Cloud - InformationWeek

Microsoft is now part of an international consortium of telecoms and cable manufacturers bringing 80TBps data speeds across the Pacific Ocean. The goal is to increase Microsoft's cloud capacity.

Software giant Microsoft has been focusing lately on putting hardware in the hands of consumers and bringing businesses into the cloud, but now Redmond is plunging to the bottom of the sea.

This week, Microsoft detailed how for the past nine months it had been "significantly" investing in subsea and terrestrial dark fiber capacity by engaging in fiber partnerships that span multiple oceans and continents.

One of those deals, a partnership between Microsoft, Hibernia, and Aqua Comms, will see each company connect one high-speed data cable, one to connect Microsoft's data center infrastructure from North America to Ireland, and then on to the UK.

On the other side of the world, Microsoft will invest in its first physical landing station in the US, connecting North America to Asia.

Microsoft, which is part of a consortium made up of China Mobile, China Telecom, China Unicom, Chunghwa Telecom, and KT Corp., with TE SubCom as the cable supplier, hopes the project will aid the company in competing on cloud costs and provide faster data connections for customers. 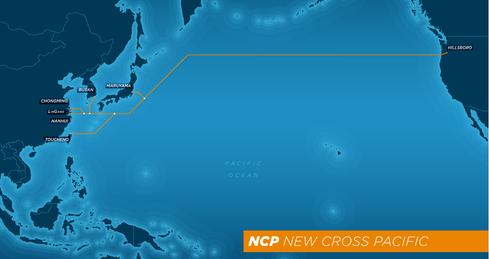 It's no surprise that Microsoft would want to build out and control these types of undersea connections. With so much emphasis on cloud computing, Microsoft needs to deliver the bandwidth, as well as the capacity, to ensure data gets to its customers.

"When we look to the future with these investments, we believe our customers will see that Microsoft is pulling together all the components necessary to make its cloud services the most reliable, accessible and secure," David Crowley, managing director of network enablement for Microsoft, wrote on the company's blog.

"Competition in the cloud and infrastructure space continues to heat up," Crowley added. "But it's not a battle that will be won on just cloud or infrastructure alone, but instead on holistic innovation and providing value to customers from the sea to the sky."

The New Cross Pacific (NCP) Cable Network's target service date is in the fourth quarter of this year. The NCP is expected to serve as key infrastructure across the Pacific by providing the foundation for new bandwidth-intensive services.

Using 100 Gigabit Ethernet technology, the NCP cable system will span about 8,500 miles, directly connecting China, Japan, Korea, and Taiwan to the US.

The consortium was first announced in February 2013. Construction began on Monday, announced in a separate release that also acknowledges Microsoft's involvement for the first time.

The $300 million FASTER cable, in which Google has invested, is capable of 60 TBps trans-Pacific data movement and is expected to be ready for service in the second quarter of 2016.

According to digital marketing consultant Builtvisible, as of 2015 there have been nearly 300 underwater cables built in oceans around the world, totaling just less than 680,000 miles of cable.

Nathan Eddy is a freelance writer for InformationWeek. He has written for Popular Mechanics, Sales & Marketing Management Magazine, FierceMarkets, and CRN, among others. In 2012 he made his first documentary film, The Absent Column. He currently lives in Berlin. View Full Bio
We welcome your comments on this topic on our social media channels, or [contact us directly] with questions about the site.
Comment  |
Email This  |
Print  |
RSS
More Insights
Webcasts
Hybrid Cloud: The Great Balancing Act
Nip Ransomware in the FUD: Detecting Attacks Pre-Encryption
More Webcasts
White Papers
Why Add Security to Your Skill Set and How to Do It
Intelligent Outcomes Are Key to Business Resilience
More White Papers
Reports
Protection Strategies for a Cyber-Resilient Organization
The State of DevSecOps Report
More Reports

This is a pretty impressive announcement. I think it's amazing that such long cables can be laid without interruption or problems. It must be such a pain if a problem occurs with one of them!

Still, I do sometimes worry that companies being investors in international cables gives them the opportunity to instigate fast lanes and supplant net neutraliy. Does it give them too much control?
Reply  |  Post Message  |  Messages List  |  Start a Board

It looks like Microsoft is vertically integrating a truly complete presence on the cloud. Not only are they supplying the organization and the software, now they're also supplying the "wire."
Reply  |  Post Message  |  Messages List  |  Start a Board

Wow, that's a lot of cable!

The amount of undersea cable is certainly not going to lessen by any stretch any time soon. As more people around the world rely on cloud platforms the need for fiber is going to increase – and that includes undersea cables.
Reply  |  Post Message  |  Messages List  |  Start a Board
Editors' Choice
Hot Topics

CRM Trends 2021: How the Pandemic Altered Customer Behavior Forever Jessica Davis, Senior Editor, Enterprise Apps,  2/18/2021
White Papers
Why Add Security to Your Skill Set and How to Do It
Enabling Enterprise Resiliency Through Cyberthreat Detection
Are We Cyber-Resilient? The Key Question Every Organization Must Answer
Stop Malicious Bots For Good: How Better Bot Management Maximizes Your ROI
Don't Let the Past Obstruct Your Zero-Trust Future