Now that Microsoft's Windows 10 update is out in the wild and sucking all the oxygen out of the tech world's atmosphere, the company is also issuing a stream of updates for the totally redesigned operating system, including the availability of its Office Mobile apps for the new OS.

Coinciding with Wednesday's Windows 10 launch, customers can download and install the apps, which include Word, Excel, PowerPoint, and OneNote, from the Windows Store in 190 countries.

All the apps have been redesigned for touch-based use and are integrated with OneDrive for cloud-based connectivity. OneDrive connectivity means users can access documents anywhere, pick up where they last left off, and co-author with others on documents and projects.

This is keeping with Redmond's plan to offer more cloud- and mobile-based options for its customers, while slowly edging away from the traditional desktop. Microsoft is also making Office apps available on platforms such as iOS and Android. 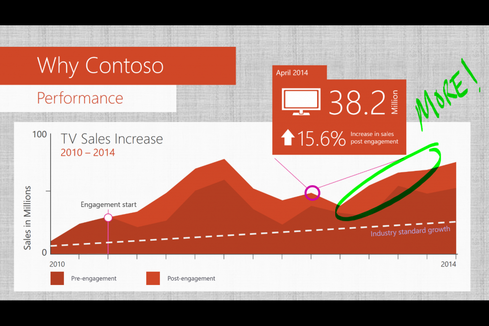 The emphasis here is on mobile. For example, the core formatting commands, styles, fonts, and spell-check tools are present on Word Mobile, but redesigned for a more touch-centric approach.

In Word, users can insert tables, pictures, text boxes, hyperlinks, headers and footers, and even footnotes and endnotes. Read mode, a new feature, resizes document to adapt to small screens and improves readability by adjusting font sizes and allowing users to tap to zoom on charts and tables.

In addition, the Bing-powered Smart Lookup feature can bring online resources like images and Web references into documents.

An additional feature, Presenter View, lets users control what the audience sees on the big screen while keeping presentation notes on the tablet.

The fourth app, OneNote, which is preinstalled on Windows 10, lets users type, write, draw, and find notes -- even handwritten ones -- and automatically saves the work and synchronizes changes made by everyone working in the notebook.

[Learn why Microsoft is confident about Windows 10 Mobile. ]

In a July 29 post on Microsoft's official Office blog, Kirk Koenigsbauer, corporate vice president of the Office 365 client apps and services team, wrote that the company will release Office 2016 for Windows desktops in September.

While Windows 10 isn't yet available for the company's Windows Phone smartphone platform, the company is promising Office Mobile for Windows 10 Mobile will arrive later in the fall.

Windows 10 represents the first major upgrade to the Windows operating system in a few years and contains not only the classic Start menu format, but also a version of the Live Tiles found in Windows 8 and Windows 8.1.

The company's ultimate goal with Windows 10 is to unify the Windows operating system across multiple Microsoft product families, including PCs, tablets, smartphones, embedded systems, and the Xbox One gaming console.

Nathan Eddy is a freelance writer for InformationWeek. He has written for Popular Mechanics, Sales & Marketing Management Magazine, FierceMarkets, and CRN, among others. In 2012 he made his first documentary film, The Absent Column. He currently lives in Berlin. View Full Bio
We welcome your comments on this topic on our social media channels, or [contact us directly] with questions about the site.
Comment  |
Email This  |
Print  |
RSS
More Insights
Webcasts
Key technology trends in 2021 - Making these technologies work for your business
Zero Trust for a Work-From Home World
More Webcasts
White Papers
Why Add Security to Your Skill Set and How to Do It
Don't Let the Past Obstruct Your Zero-Trust Future
More White Papers
Reports
The Infoblox Q4 2020 Cyberthreat Intelligence Report
Enabling Enterprise Resiliency Through Cyberthreat Detection
More Reports

I downloaded Word Mobile. I might be doing something wrong, but without Office 365 subscription or perhaps a full blown Office suite, Word opens docs read only mode. I can not open a blank document or edit and save the ones that I can open.  Is this correct or just me?
Reply  |  Post Message  |  Messages List  |  Start a Board

Too good but too late. Too late to be effective. Its not dead on arrival. But Google Apps has been there - done that. These are good features but Redmond need to come up with even better if it needs to claim any significant space in the mobile eco system. Google is doing with Microsoft what Microsoft once did with IBM. Reducing it to old generation computing models - till the time when elephants were taught to dance again.
Reply  |  Post Message  |  Messages List  |  Start a Board

useful information, in past i have use the windows 8 and 8.1 but none are better than windows 7, i hope windows 10 better for use more then 7.
Reply  |  Post Message  |  Messages List  |  Start a Board
Editors' Choice
Hot Topics