Microsoft Office 365 customers will soon be able to sign documents electronically without outside applications -- an ability that could help businesses to embrace the paperless office ideal.

Users will gain the feature thanks to a long-term partnership Microsoft announced Monday with the prominent e-signature company DocuSign. The deal could help stimulate developer interest in Microsoft's fledgling Office App Store. It also adds to a growing list of capabilities Microsoft has infused into Office 365 to differentiate the cloud-based subscription service from traditional standalone versions. Last week, for example, the company released its Power BI suite of business intelligence tools for Office 365.

DocuSign's tools will be available in early March as a freemium add-on distributed through the Office Store. It will be integrated into Outlook, Word, SharePoint Online, and SharePoint Server 2013.

DocuSign will be integrated with Azure Active Directory to enable single signon. Users should be able to sign documents without leaving the applications and without re-authenticating prior to applying a signature. Grosse said free services will include the ability to sign and return documents sent to you and to send a limited number of your own documents to other people. DocuSign will offer additional paid services beyond the core offerings.

Signed documents will be stored in OneDrive or OneDrive for Business, depending on whether the user has a Home or Professional Office 365 account. Many enterprises might be hesitant to store important businesses documents in the cloud, but Grosse said DocuSign has implemented a number of security precautions to help customers rest easier.

Security and privacy are important to a lot of customers. DocuSign offers not only file encryption but also an audit trail and the promise to "back you up in court if any transaction is every legally questioned." Only document owners are granted key access, meaning customers' encrypted data is inaccessible even to DocuSign employees. 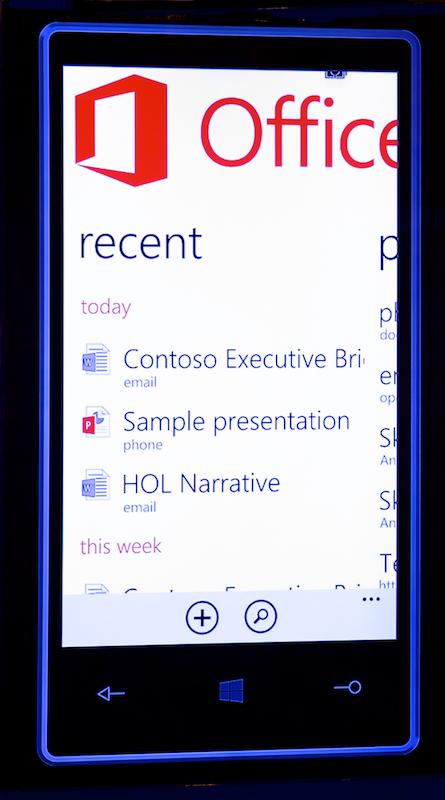 Microsoft's deal with DocuSign could generate interest in Office 365 apps.

Some Office 365 customers have praised the service for lightening the burden on in-house IT staff members, enabling mobility programs, and providing financial flexibility. Office apps, though, have been noteworthy more for their potential than their popularity. Partnerships like the one with DocuSign could help Microsoft gain momentum.

Microsoft senior director Arpan Shah told us the company is dedicated to making the Office Store "a platform that partners and developers can easily build contextual solutions on top of" and that harnesses Microsoft services such as OneDrive and Active Directory for simple security and administration. Cloud-based apps allow developers to stay on the bleeding edge by constantly pushing new, innovative features to users.

Microsoft and DocuSign are expected to demonstrate their offering during Microsoft's SharePoint 2014 Conference, which will kick off Monday, March 3, in Las Vegas.

Office 365 faces a number of cloud-based challengers, including Google Apps for Business and, to a lesser extent, Apple's iWork suite. But Microsoft COO Kevin Turner told analysts in September that Office 365 was on pace for more than $1.5 billion in annual revenue, and that 440 of Google's corporate customers had defected to Office 365 within the last year.

Last month, the company credited Office 365 and Azure for driving 10% growth in its commercial revenue streams. The company also reported that, even though consumer sales of standalone Office licenses were down, Office 365 Home Premium subscriptions had increased more 75% since the previous fall.

Michael Endler joined InformationWeek as an associate editor in 2012. He previously worked in talent representation in the entertainment industry, as a freelance copywriter and photojournalist, and as a teacher. Michael earned a BA in English from Stanford University in 2005 ... View Full Bio
We welcome your comments on this topic on our social media channels, or [contact us directly] with questions about the site.
Comment  |
Email This  |
Print  |
RSS
More Insights
Webcasts
Building the SOC of the Future: Next-Generation Security Operations
Making Cybersecurity Work in Small and Medium-Sized Businesses
More Webcasts
White Papers
How to Prioritize Risk Across the Cyberattack Surface
The 2020 Duo Security Trusted Access Report
More White Papers
Reports
The Drive for Shift-Left Performance Testing
Special Report: The Changing Face of Threat Intelligence
More Reports

Oh, how happy I would be to get rid of the mass paper trail associated with approvals.  Think about it, you have a project on the go at work and you need to get a few directors to sign off on it.  This means you either have to print out a single copy, hand it to director #1 and wait until they sign to pass it to the next director in line.  What if someone is out of town?  What if they are just swamped and see your project as being non-critical?  You are waiting on a signature that is holding up your entire project.

You could also print out multiple copies of the document and circulate for signatures, but then everyone feels like they are the first one to sign off and worry they are making the wrong decision. After all, no one likes being the first to put skin in the game.  You also have the problem of consolidating multiple documents after all the signatures are obtained.  Not a fun exercise.

I think E-Signatures could fix this annoyance quite easily.  Simply send everything out digitally and all of a sudden you can get everyones signature without printing out a single page.  Not to mention a reduction of headaches associated with running around the office with papers trying to find adminstration assistants and executives.  Increased productivity for all!
Reply  |  Post Message  |  Messages List  |  Start a Board

Electronics signatures definitely take Office 365 to the next level. But IMO the Google alternatives still fall short in relation to essential Office apps like spreadsheets and even Word docs for serious business users.
Reply  |  Post Message  |  Messages List  |  Start a Board

For many customers, I think it was already tipping, even before this announcement. People are skeptical about cloud delivery models and recurring subscriptions-- but that problem involves conditioning customers to new business models, not weakness with the actual product. As far as I can tell, Office 365 offers a lot of benefits in terms of cost savings, reduced IT demands, mobile-ready workforces, and so on. It's a strong package.

Microsoft still faces threats, of course. A lot of people spend more time using Android tablets and iPads than they do PCs-- not necessarily for creating documents, but certainly for reviewing them. The absence of Office on either of these leading tablet OSes has arguably made Microsoft vulnerable on certain fronts. The slowing of the PC market (a traditional engine for new Office sales) hasn't helped either, though Microsoft has reported a promising uptick in consumer 365 subscriptions.

Here's another challenge: a lot of people are happy with older versions of Office. Office 365's features are potentially useful-- BI tools; cross-pollination among the apps, like having Lync available inside of Outlook; access to documents on almost any device at any time; etc. But it's all more than a lot of people need. Simple e-mail, spreadsheets and word processing apps can go a long way. That's where Microsoft competitors such as Google come in.

Google doesn't offer the deep functionality that Microsoft does-- but for most people, it offers enough, and it's cheap or free, depending on your needs. Office 365 is a good product that's already on its way to becoming a blockbuster, multi-billion dollar revenue stream. That said, the old PC-era Office model has traditionally been an even bigger revenue stream. It remains to be seen if Office 365, big as it will surely become, will compensate for shifts elsewhere in the product line.

This DocuSign deal, though, can only help. Easy eSignature integration is something businesses of all sizes, and even many consumers, can use.

What do you think, readers? Was Office 365 attractive before this deal? Has the DocuSign deal made it any more appealing? If you prefer Google or some other alternative, any reason for dumping Office?
Reply  |  Post Message  |  Messages List  |  Start a Board

Yeah, it's definitely a good thing, both in Microsoft's case and in general. The storage implications alone impress me. If you're not careful, digital storage can be pretty messy-- but nowhere near as messy as physical storage. Boxes of old contracts don't include a search function to help you locate a poorly-placed document; digital folders do. Plus, think of the cost implications. Companies spend a ton of money holding onto old documents for reasons of liability or posterity-- and that storage space isn't free. I suspect it's cheaper to house old documents on a hard drive than in a storage building.
Reply  |  Post Message  |  Messages List  |  Start a Board

This is actually a big step forwrard for Office 365. Legal digital signatures will prove useful and a reason for people to start using Microsoft online applications. I completed a house buying process using verified digital signatures, right up to but not including, the mortgage signing. And I kinda wanted that to be on paper.
Reply  |  Post Message  |  Messages List  |  Start a Board

Electronic signing is so important. How inefficient is it to sign a paper docuent today? Really bad. You print a document. You sign it. You scan it. These things take time.

It would be better to just eradicate that whole process - it isn't needed anymore with digital technology.
Reply  |  Post Message  |  Messages List  |  Start a Board

What are you using for e-signatures, Google Apps users?
Reply  |  Post Message  |  Messages List  |  Start a Board

True, but this new capability might be just the thing to tip the balance in Microsoft's favor. It's a powerful inducement.
Reply  |  Post Message  |  Messages List  |  Start a Board

This is a natural fit with Office 365, especially for people using tablets, but actually swaying people to choose Office 365? That's a much taller order.
Reply  |  Post Message  |  Messages List  |  Start a Board
Editors' Choice
Hot Topics