A demo of Xamarin tools, which enable developers to build fully native mobile apps to run across iOS, Android, Windows, and Mac platforms using a single code base, was among the highlights of the second-day keynote at Build 2016. The lengthy keynote also brought updates on Azure, Power BI, and Office.

Cloud and productivity were the main keynote themes on the second day of Microsoft's Build 2016 conference in San Francisco, March 31. Demos of tools from Xamarin, a mobile development company recently acquired by Microsoft, and a series of Office updates for developers were the highlights of the presentations.

Microsoft announced that it's integrating Xamarin into Visual Studio for free to users of all Visual Studio editions: Enterprise, Professional, and Community. It's also making the Xamarin runtime open source, meaning .NET will be fully open source and available on any device.

Office-specific updates for the developer crowd included: improvements to Office Graph for building business apps, a simpler means of adding to Office apps, deployment of ribbons and buttons, and extensibility tools for Skype and Office 365 groups.

Scott Guthrie, EVP of the company's Cloud + Enterprise division, kicked off the lengthy keynote, which also brought updates on Azure, Power BI, and Office 365, among other technologies.

Guthrie began by illustrating the growth of Azure, which he said garners more than 120,000 new subscriptions per month. More than 1.4 million SQL databases are hosted in Azure, he said, and more than 2 trillion IoT messages are processed by Azure IoT each week.

The first day of Build started with news related to Windows 10, Skype, artificial intelligence, machine learning, Cortana, HoloLens, Xbox, and demonstrating the value of Windows for developers. Here's a closer look at two key topics addressed in the second-day keynotes:

To give the first demo of the day, Guthrie called on Miguel de Icaza, cofounder of Xamarin. The company's tools enable developers to build fully native mobile apps to run across iOS, Android, Windows, and Mac platforms using a single code base. It was already a Microsoft partner, and had created tools to work with Visual Studio, Office 365 and Azure, prior to being acquired. 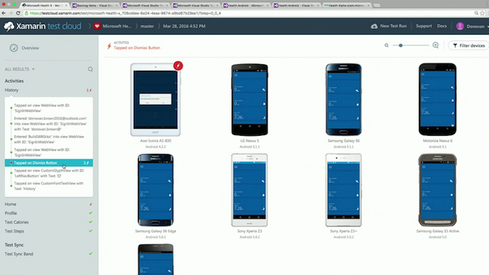 Xamarin's de Icaza demonstrated the process of creating iOS and Android apps using Microsoft's Visual Studio. He showed how developers can code an app in C# on a Mac running the iOS simulator in Visual Studio, while being remotely controlled on Windows. He noted the simulator will support multitouch, which is not possible on Mac OS X.

De Icaza also showed how an Android app can be tested in the Android emulator in Xamarin. He used the Xamarin Inspector tool to test code and run it live. The Xamarin Test Cloud lets developers test code across devices, and the Test Recorder lets them record tests, drill down into specific problems, and save test videos.

Microsoft is extending the capabilities of the Microsoft Graph, which developers can use to bring data from Microsoft services into their own apps. Developers can now use the Graph to retrieve user data such as email attachments, and can use new APIs to return relevant documents and meeting time suggestions.

The team is boosting the responsiveness of apps that use Office data by providing notifications via Office Graph for changes made to users' contacts, mail, and calendar.

Add-ins are coming to Office for Mac, along with centralized deployment and the creation of ribbons and buttons specific to company needs. Starbucks CTO Gerri Martin-Flickinger took to the stage to show how a new Starbucks add-in for Office works. Customers will have the option to send Starbucks gifts in Outlook, as well as schedule meetings at nearby cafes.

In an effort to make conversations more intelligent, Microsoft is announcing a new Skype for Web SDK, Skype for Business App SDK, and Office 365 Group Connectors.

The Skype SDK updates are part of a broader initiative to combine cloud voice, meeting, and messaging with APIs and SDKs across a range of Web and device platforms. They enable companies to give customers the option of chatting with experts using Skype via mobile app. For example, MDLIVE is letting doctors and patients chat using a mobile app powered by Skype.

Developers can use Office 365 Groups connectors, also available today, to push data from their apps into an Office 365 Groups chat using Outlook. This will let enterprise users interact with external data using a service that's already familiar to them.

Kelly Sheridan is the Staff Editor at Dark Reading, where she focuses on cybersecurity news and analysis. She is a business technology journalist who previously reported for InformationWeek, where she covered Microsoft, and Insurance & Technology, where she covered financial ... View Full Bio
We welcome your comments on this topic on our social media channels, or [contact us directly] with questions about the site.
Comment  |
Email This  |
Print  |
RSS
More Insights
Webcasts
How Elite Analyst Teams are Transforming Security with Cyber Reconnaissance
ROI and Beyond for the Cloud
More Webcasts
White Papers
5 Steps to Zero Trust in the Data Center
SANS Report: Measuring and Improving Cyber Defense Using the MITRE ATT&CK Framework
More White Papers
Reports
How Data Breaches Affect the Enterprise (2020)
How IT Security Organizations are Attacking the Cybersecurity Problem
More Reports