Microsoft has learned a lesson from Google Glass. The company's HoloLens is designed for developers who want to create enterprise, not consumer, applications.

When Microsoft CEO Satya Nadella talked with the BBC just after the release of Windows 10 about his company's evolving product line, he gave the first realistic time frame for the delivery of HoloLens -- Redmond's much-discussed augmented reality viewer.

Specifically, Nadella pledged that developers and commercial users will get their hands on the first version of it "within the next year." He added the company's AR wearable is on "five-year journey" and that it "will arrive in the Windows 10 timeframe."

A personal version of HoloLens was not addressed, and for good reason.

First, HoloLens is tightly bound with the Windows 10 operating system.

Microsoft says on its website that Windows 10 will "support holographic computing with APIs that enable gaze, gesture, voice, and environmental understanding on an untethered device." Untethered means that there are no wires, phones, or connections to a PC needed in order to be operable. 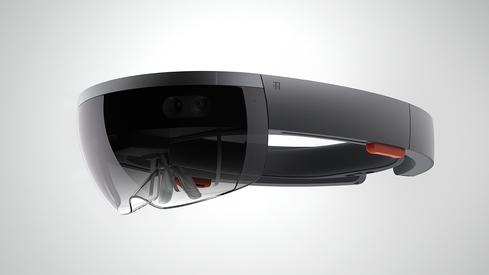 What does this mean? Specifically, Microsoft is telling us that HoloLens is not a VR device by design. It does not immerse the wearer in an environment. It will place a generated visual layer over the real world that a user sees.

Fo the future, then, think of HoloLens primarily as a business tool, not something you would see in the consumer space. This is also in keeping with Microsoft's gradual moving away from the consumer market, while strengthening its ties to the market it knows best -- the enterprise.

As the company says, "Microsoft HoloLens will be a revolutionary tool for businesses -- transforming how companies, designers, and creators work with three-dimensional data to bring products and information to life."

[Read about what Microsoft is doing beyond Window 10.]

This assumption about their target market may be valid, since the price of the wearable is likely to be high given the prototypes that have been shown.

The optics alone are more complex than the Google Glass device, and that was priced right out of the consumer market from the get-go. The optics are the key to how light gets interpreted by the user as matter.

The processing unit of the HoloLens is also said by Microsoft to "contain more computing power than the average laptop." It works with the embedded sensors -- which grew out of the ones in the Kinect gaming accessory -- to generate positional information used in producing the resulting image.

It seems most likely that Microsoft will go with enterprise and commercial users first with HoloLens, following what Google is doing with its enterprise version of the Glass wearable. Both devices are pricey for consumers, who may be satisfied with VR rather than AR.

With a submission deadline of Sept. 5, it is designed to fund academic research proposals regarding how holographic computing will, in Microsoft’s words, "help people create, learn, communicate, collaborate, work, and play in new ways." Recipients will get two Microsoft HoloLens devices and $100,000 towards funding.

Larry Loeb has written for many of the last century's major "dead tree" computer magazines, having been, among other things, a consulting editor for BYTE magazine and senior editor for the launch of WebWeek. He has written a book on the Secure Electronic Transaction Internet ... View Full Bio
We welcome your comments on this topic on our social media channels, or [contact us directly] with questions about the site.
Comment  |
Email This  |
Print  |
RSS
More Insights
Webcasts
The Failures of Static DLP and How to Protect Against Tomorrow's Email Breaches
Protecting Your Enterprise's Intellectual Property
More Webcasts
White Papers
A Technical Deep Dive on Software Exploits
IDC Workbook: Best Practices for Cloud Security
More White Papers
Reports
How IT Security Organizations are Attacking the Cybersecurity Problem
2020 State of Cybersecurity Operations and Incident Response
More Reports

Google Glass carries a huge burden from Glass 1.0. Anytime a product gets linked to a term like "Glassholes" you have a real problem.

So, they are trying to get buzz and some sort of killer app for it. Very understandable.

This is probably why Google is pushing tools to simulate applications on their next version of Glass.  People seeing what they can do is a huge benefit to their product.  It can take developers time to figure out what a product can do and to get their heads around how to implement it.  Microsoft seems to be telling developers how they want HoloLens to be used or they are at least telling them what the limitations are.  The hype around Glass was almost the exact opposite and watching their concept videos you would think that it was going to take over the world.
Reply  |  Post Message  |  Messages List  |  Start a Board

Peeling away unnecessary layers woud be a great way to work so that only those layers needed for the job are available.

I think that will be dependent on the actual software involved, not the device itself.

But there will probably be a learning curve for developers with the device.
Reply  |  Post Message  |  Messages List  |  Start a Board

So with the Hololens you don't think that you'll be able to peel back layers, or push them around?  The overlay doesn't sound to me like it's going to be the overhead transparencies of my childhood. You should still be able to interact with those overlays.  To me it sounds like it will be projected into a smaller specific field of view and not be all encompassing.  Maybe that is where Microsoft is drawing the line.
Reply  |  Post Message  |  Messages List  |  Start a Board

The line to me is whether it will be useful interacting with "real" reality seen by your eyes.

I'm not sure where the line is drawn though, Oculus Rift is projecting images inside a pair of glasses right now, right?  Microsoft does have other products like IllumiRoom that is more holograph/holodeck feeling.  Any of the glasses seem to do well with augmented reality and not leaning toward virtual reality since there is a much bigger set of tools needed.
Reply  |  Post Message  |  Messages List  |  Start a Board

Well, i mean to contrast with VR wearables like Oculus Rift.

I think you have a great example of the kind of thing that HoloLens  will greatly aid in. Perhaps it could even decide what page of the repair manual is needed based on what is actually viewed without direct user decision.
Reply  |  Post Message  |  Messages List  |  Start a Board

" It will place a generated visual layer over the real world that a user sees."

Isn't this how all of the other goggle/glasses like devices work?

I remember seeing a concept video years ago with an auto mechanic being walked through disassembly and reassembly in a shop.  I can see Hololens or similar products taking off here first especially in the field.  Heavy equipment repair in remote areas by someone who has to work on a wide range of  products would really benefit from having the layover image that moves with them and helps them make shorter work of big jobs.