Microsoft's earnings report for its third fiscal quarter exceeded Wall Street's expectations. On April 23 the tech giant reported $21.7 billion in revenue and $0.61 earnings per share (EPS); it was predicted to earn about $21.1 billion, reports Reuters.

This revenue report marks a year-over-year increase of 6%, noted Satya Nadella on the company's quarterly earnings conference call. Other key financial metrics, Microsoft reported, include an operating income of $6.6 billion and a gross margin of $14.6 billion. Net income was down 12%. The company did note that the financial report from this quarter includes $190 million of costs related to restructuring and integration, and that results were affected by a stronger US dollar.

"It's clear that we are well on our way to transforming our products and businesses across all of Microsoft," he said.

Transformational is an accurate term for a quarter that saw tremendous success across cloud services and decline throughout Microsoft's traditional offerings. The company's commercial revenue increased 5% to hit $12.8 billion.

Microsoft's commercial cloud business, which saw 106% growth, had a run rate of $6.3 billion. This marks an increase of $5.5 billion from the quarter prior.

Office 365, Azure and Dynamics CRM were the primary drivers behind the success of commercial cloud. Microsoft is seeing continued growth in Office 365 value with its new MDM offering, and recent updates like Delve for mobile and Skype for Business will likely bolster future success.

Nadella also noted that more developers are choosing Azure for apps. There is significant customer interest in Azure machine learning and stream analytics, especially for scenarios related to the Internet of Things.

Consumer cloud services also had a strong quarter. Office 365 grew 35% from the previous quarter and now has 12.4 million subscribers. The mobile-first strategy is key in this space, said Nadella, who also noted that consumers are now downloading Microsoft services on their iPhone and Android devices.

Search revenue grew by 21% in Q3, marking positive growth that will likely be furthered by Microsoft’s recently renewed partnership with Yahoo. 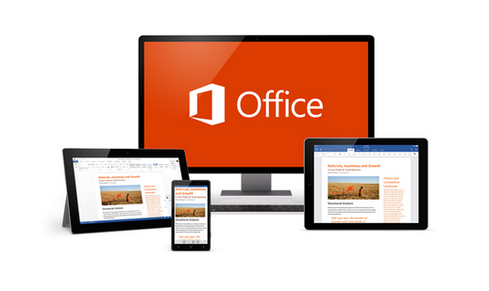 The Device and Consumer segment saw 8% revenue growth and hit $9 billion. The Surface earned revenue of $713 million, an increase of 44% from Q3 last year and a nice platform for the Surface 3 to launch off next month. Microsoft sold 8.6 million Lumia phones, which earned a total of $1.4 billion in revenue.

The weak spots of Microsoft's Q3 report were related to its Office and Windows software, both affected by a lagging PC market among other factors. Revenue for Windows licensing dropped 19% for businesses, after sales spiked last year following the announcement of the end of Windows XP support. Windows licensing revenue for consumers fell by 26% in Q3. The Windows volume licensing saw a 2% decline.

The termination of XP support affected Office as well. Commercial Office revenue dropped 16%; consumer Office revenue fell 41%. Microsoft noted that the decline could be attributed to an increase in preference for Office 365 combined with lower PC sales following the XP refresh cycle.

Overall, it was a good quarter for Microsoft. In the hours following its earnings announcements, Microsoft shares increase 3.1% to hit $44.70.

Kelly Sheridan is the Staff Editor at Dark Reading, where she focuses on cybersecurity news and analysis. She is a business technology journalist who previously reported for InformationWeek, where she covered Microsoft, and Insurance & Technology, where she covered financial ... View Full Bio
We welcome your comments on this topic on our social media channels, or [contact us directly] with questions about the site.
Comment  |
Email This  |
Print  |
RSS
More Insights
Webcasts
Zero Trust for a Work-From Home World
Optimizing App Performance in the Cloud
More Webcasts
White Papers
Why Add Security to Your Skill Set and How to Do It
2021 SANS Cyber Threat Intelligence Survey
More White Papers
Reports
Protection Strategies for a Cyber-Resilient Organization
Are We Cyber-Resilient? The Key Question Every Organization Must Answer
More Reports

Revenue for Windoze licensing will continue to drop as long as MS continues to force users to buy a new OS every 18 months.  Has nothing to do with lagging pc sales.
Reply  |  Post Message  |  Messages List  |  Start a Board
Editors' Choice
Hot Topics