Microsoft usually makes news during the annual International Consumer Electronics Show in Las Vegas, but the buzz typically centers on Steve Ballmer or Bill Gates giving a keynote speech that sets the tone for the coming year's technology trends. That's no longer the case. Microsoft is playing only a background role at this year's show, and possible tensions in its ongoing CEO search are coming to the fore.

Ford CEO Alan Mulally, who has been perceived as a leading candidate since Ballmer announced his retirement plans in August, is no longer in the running, according to an AP report published this week. This technically narrows the list of possible successors, but reports continue to indicate that power struggles are playing out behind the scenes.

The Wall Street Journal reported Jan. 3 that at least some people who have been interviewed for the job are concerned they won't be able to lead effectively because of the sway held by Gates and Ballmer, who both hold seats on the Microsoft board. Since the CEO search began, the media has questioned whether the company's next chief will adhere to Ballmer's One Microsoft plan, especially its consumer-oriented aspects. Reports have suggested that some Microsoft investors are concerned about Gates and Ballmer's influence not only over the selection process, but also over the ability of the next CEO to implement significant changes, such as redirecting resources toward enterprise products.

How this alleged discontent is affecting the selection process remains unclear. Citing an individual familiar with the board's thinking, Reuters reported this week that Microsoft has narrowed its list to a "handful" of candidates and is close to appointing a leader. But the technology site Re/code, citing inside sources, predicts the process will stretch into February, partly because Gates's January schedule is packed.

John Thompson, the Microsoft board member leading the search committee, said last month that the company will announce its decision early this year. Thompson had previously said the board supports Ballmer's vision. However, in December, the website All Things D reported many workers are uncertain if the company's current leaders will stay once the new CEO is named. It's unknown how widespread these concerns are, but the departure of senior leaders would only complicate the ongoing reorganization efforts, regardless of who's in charge.

Investors pose another potential complication. Several prominent investors have reportedly expressed misgivings about the company's direction. ValueAct Capital Management, a hedge fund that bought more than $2 billion of Microsoft stock in 2013, has garnered particular attention. Microsoft agreed last year to grant ValueAct president G. Mason Morfit the option to join the company's board in 2014. ValueAct reportedly disagrees with Microsoft's ambition to build its own devices, and it remains unclear what kind of influence Morfit would have if he followed expectations and accepted a board seat. It's likewise unclear how the board would react if the next CEO began departing from the company's current trajectory. 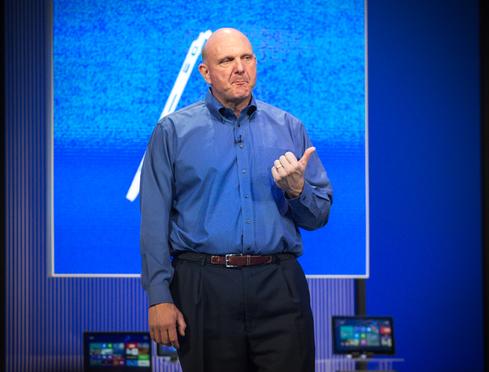 Microsoft's partners are also sending mixed signals about the company's future. Recent Windows devices from HP, Acer, and Dell are more attractive and affordable than those that debuted alongside Windows 8 in 2012. But execs at many of these companies have spoken critically of Microsoft over the last year. Several are also branching out into non-Windows platforms. Some are producing desktops that run Chrome OS or Android.

Intel CEO Brian Krzanich paid some lip service to Microsoft in his CES keynote address by saying two-in-one tablet-laptop hybrids -- a major Intel marketing emphasis in 2013 -- will become more common this year. But Krzanich dedicated most of his attention to wearable devices. When he did discuss Windows, most his remarks involved Intel's "dual OS" plan, which allows computers to switch between Android and Windows 8 with the touch of a button. The subtext is that, though Microsoft and Intel still rely on each other, the Wintel years are over. Intel and others in the PC business seem unconvinced that Windows Store touch apps will become true competitors to iOS and Android, and they're adjusting their bets accordingly.

We welcome your comments on this topic on our social media channels, or [contact us directly] with questions about the site.
Comment  |
Email This  |
Print  |
RSS
More Insights
Webcasts
Architecting Security for the Internet of Things
The Pesky Password Problem: Policies That Help You Gain the Upper Hand on the Bad Guys
More Webcasts
White Papers
5 Key Steps for Assessing Your Security Effectiveness
The Benefits of Adding Cloud Telephony to Microsoft Teams
More White Papers
Reports
Top 10 Security Technology Trends to Watch, 2020
Building an Effective Cybersecurity Incident Response Team
More Reports

My point is that as an executive of any company, the business acumen is essential. But for a high-tech company, you cannot simply avert from technical stuff. In other words, the correct technical vision/sense is mandatory. The hard-sale will not work out - you need to use your expertise to convince the potential customer.
Reply  |  Post Message  |  Messages List  |  Start a Board

Given what Stephen Elop did to Nokia, I'm surprised he's in the running.
Reply  |  Post Message  |  Messages List  |  Start a Board

I agree, Ballmer and Gates should get out of the way. Tech visionaries do not like to have control freaks hovering over them. But Microsoft is Ballmer and Gates's baby -- and they won't get out of the way. As a result, don't expect Microsoft to end up with a tech visionary but a competent, malleable executive. One who hopefully has a better understanding and respect for underlying technology than the sales-driven Ballmer.
Reply  |  Post Message  |  Messages List  |  Start a Board

Microsoft needs to pick the right successor. It needs to get this decision right. Investors, customers, partners, employees, consultants...they all have their point of view. No matter who Microsoft picks, various camps will yelp. So I'm not concerned that Microsoft is taking "too long" to pick Ballmer's successor. Take the time to get it right. And then commit to that CEO's vision.
Reply  |  Post Message  |  Messages List  |  Start a Board

Agreed-- definitely a big shift. Last year at CES, the PC players (including Intel) were all touting Win 8 and convergence. This year, Intel still has a lot of 2-in-1 hybrid tablets on display, but the devices are just a piece of Intel's exhibit space. Wearables, augmented reality, connected cars, etc-- all being given more attention, as far as I can tell.

And among the PC companies at the show, it's largely the same story. Lenovo was showing off its new Horizon mega-tablet, but their reps were much more interested in talking about the proprietary software Lenovo has layered on top of Windows 8.1 than in the OS itself. At the same time, I've seen more people wearing Google Glass around the show than carrying Windows 8 devices. I think Win 8.1 was a noteworthy improvement, as I've written before, but it's clear that Microsoft's next CEO will have to deal with a different and more challenging OEM ecosystem.
Reply  |  Post Message  |  Messages List  |  Start a Board

Intel's dual OS plans don't generate as much buzz out of CES as huge TVs and weraable computers do, but make no mistake: That is a huge shift for Microsoft. As analysts point out today, it is also a complex new profit game for Intel, which had its PC market profits down to a science.
Reply  |  Post Message  |  Messages List  |  Start a Board
Editors' Choice
Hot Topics