Following a sales slowdown, Apple is working with more than 40 companies to make its iPad a more appealing enterprise tool.

Apple's iPad sales cast a gloomy shadow on its most recent fiscal third quarter, during which profits were driven by a record-setting 47.5 million iPhone shipments.

Cupertino shipped 10.9 million iPads during the same time frame. This indicates an 18% drop in devices sold and 23% revenue decrease.

The iPad has been tumbling since the first quarter of 2014, when it peaked at 26.4 million units shipped. It's a sign that even Apple has trouble competing in the tablet market, which Gartner predicts will further decline this year before a pickup in 2016.

[Salesforce looks to Apple Watch as a business app platform.]

Fewer people are snapping up new tablets or upgrading their current devices. Tablets are not must-have devices for everyday consumers, and even the newest products lack innovative features that would encourage people to invest in an upgrade.

Now Apple is looking beyond consumers and to the enterprise for the tablet pick-me-up it desperately needs. The company has never been a major force in workplace tech, but it's hoping its mobile expertise can give it an edge in a market dominated by competitors Microsoft, Google, and Samsung.

A Wall Street Journal report claims Apple has partnered with more than 40 technology firms to make the iPad a more appealing tool for business customers. The project has been internally referred to as the mobility partner program (MPP).

Many of the companies involved in the initiative are small developers of accounting or sales presentation apps, though organization names were not disclosed.

Apple's partners are working to develop iOS apps for businesses. Apple reviews their apps, suggests detailed changes, and encourages partners to build apps that work together. Partner companies were invited to present at Apple's March sales conference, the WSJ reports, and to train Apple business specialists. 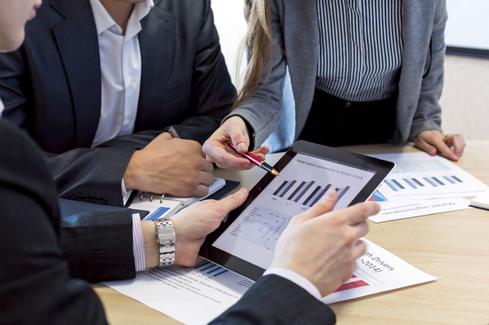 As expected, Apple's new partner program is shrouded in secrecy. The project was first mentioned during an April investor call, with few details shared. Partner companies involved have admitted they lack details on their roles in the initiative and the names of all the businesses Apple has selected to participate.

The long-term goal of Apple's project is to sell businesses app bundles designed for specific industries (think accounting, retail). The company has also mentioned collaborating with mobile carriers AT&T and Verizon to help sell both apps and devices.

Research shows the enterprise could bring a boost to the sluggish tablet market. Forrester has predicted that, by 2018, 20% of global tablet use will come from the enterprise.

Apple has also been rumored to be working on a larger tablet for business customers. Developers exploring code in the iOS 9 beta found a concealed keyboard seemingly designed for a tablet with a larger screen and higher resolution. The discovery is the latest evidence of Apple's rumored iPad Pro.

Kelly Sheridan is the Staff Editor at Dark Reading, where she focuses on cybersecurity news and analysis. She is a business technology journalist who previously reported for InformationWeek, where she covered Microsoft, and Insurance & Technology, where she covered financial ... View Full Bio
We welcome your comments on this topic on our social media channels, or [contact us directly] with questions about the site.
Comment  |
Email This  |
Print  |
RSS
More Insights
Webcasts
What We Can Learn from Sports Analytics
Protecting Your Enterprise's Intellectual Property
More Webcasts
White Papers
Improving Your Enterprise's Protection With Cyber Resilience
Top Threats to Cloud Computing: The Egregious 11
More White Papers
Reports
The Malware Threat Landscape
Evolution of Ransomware Gangs
More Reports

You're right, I think the consumer market for iPad shrunk as iPhones got bigger. The novelty of iPad wore off and people realize they don't need two touchscreen Apple devices that are so close in size and functionality. There hasn't been much innovation in the iPad since it launched, so there's little need for people to upgrade their devices.

I think for certain roles, the iPad can be useful in the enterprise and that's why Apple is going after that market.
Reply  |  Post Message  |  Messages List  |  Start a Board

When the iPad was introduced in 2010, it was hailed as a consumer device. But I think that idea has shifted over to the tablet having a lot more use cases in business settings.

For me, I don't see the need for a tablet. I think others are realizing this – why not just use your phone for what a tablet can do? Smartphones are getting bigger, and I personally see no reason for two separate devices.
Reply  |  Post Message  |  Messages List  |  Start a Board
Editors' Choice
Hot Topics

10 IT Trends to Watch for in 2021 Cynthia Harvey, Freelance Journalist, InformationWeek,  12/22/2020
White Papers
What To Consider Before Renewing Your SD-WAN
Zero Trust Evaluation Guide
The Insecure State of Microsoft Teams Security
From MFA to Zero Trust
Passwordless: The Future of Authentication