HP Discover 2015: What We Learned - InformationWeek

HP Discover is HP's largest annual meeting. Announcements were of the "continuing evolution" sort, though they're likely to make HP customers happy as everyone works through the implications of the two Hewlett-Packards yet to come.

HP Discover is the computer giant's annual meeting of the faithful, where customers come together with engineers, programmers, designers, and other customers to hear about HP's plans and generally feel better about their choice of hardware and systems. Whenever a company holds a meeting like this there will be announcements of new products and customer "wins," and HP's conference was no exception. So what did we learn at HP Discover 2015, held in Las Vegas June 2-4?

Broadly speaking, the things we learned break down into three categories: Company news, customer news, and product announcements. For most IT professionals, the company news was the quiet backdrop for everything else that came in the meeting. 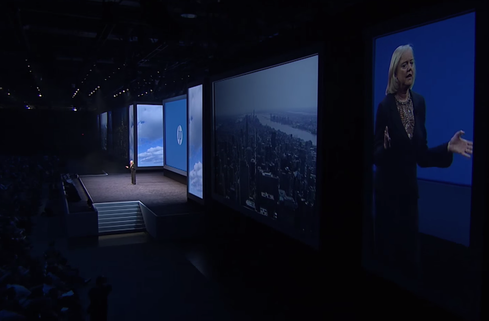 This was the last Discover event for HP as it now exists. By next year, there will be two companies, one focusing on enterprise products and services, the other on products for the consumer market. Customers and financial markets alike would love more details about exactly what the two companies are going to look like, but such details were in short supply during the week. That doesn't mean there were no details, however. We now know:

What else did we learn? Let's look first at the customer story.

HP Wants To Be In Pictures

In addition, Hewlett-Packard Enterprise will be partnering with Lightstorm and 20th Century Fox, the makers of Avatar -- one of the highest grossing movies of all time -- on three upcoming sequels. According to a prepared statement: "As part of the agreement, which extends through the release of the final film in the epic four-part saga, HP and its partners will create a bridge between the digital and physical worlds and bring the Avatar experience to its fans in new and innovative ways."

In practical terms, this means that HP is providing computers, storage, networking, and managed services to the companies.

Now, about those products and services: HP had several announcements regarding storage, networking, and services during the conference.

If you want to make storage that's really fast, you have to leave spinning disks behind. That's what HP did in the new HP 3PAR StoreServ 20800 and 20850 platforms, which, according to an HP blog, "...include a new class of massively scalable flash arrays, flash-optimized data services to accelerate IT-as-a-Service consolidation, a 25 percent lower cost flash capacity, and hybrid IT initiatives." HP certainly isn't alone in moving storage away from magnetic media, but this announcement plants the company firmly in the middle of the high-performance storage battles.

HP Is Willing To Test The System

HP LeanFT is all about functional testing -- testing a system to see whether or not an application (or system) does what it was designed to do. Functional testing isn't about performance -- it's about the basics of whether the test subject works. With the rise of Agile development methodologies, rapid, near-continuous functional testing is a requirement. LeanFT provides a platform for those tests on locally hosted, remotely hosted, cloud, or hybrid infrastructures.

HP Is In The Cloud

HP's Helion cloud system was the subject of some confusing communication earlier this year. (We're leaving the public cloud space! No, we're not! Maybe!) But the Helion message at Discover was pretty clear. The HP Helion CloudSystem 9.0 expands support for multiple hypervisors and multiple clouds as it's positioned as the single cloud platform that can be the heart of a complex, hybrid cloud infrastructure. HP is happy to deliver Helion CloudSystem as a separate piece of software or as part of an HP ConvergedSystem. Either way, HP wants very much for Helion to be the central point of your cloud infrastructure -- even if it can't convince you to get rid of all the Azure or AWS instances you depend on.

Converged systems have been a staple of vendor offerings for a few years, and HP's announcements show that it's keeping the love going for these systems that pull processing, storage, networking, and management into a single rack. HP spent time talking about the HP OneView 2.0 management platform, a new partnership with Arista Networks, and a series of new workload-optimized reference architectures. OneView is going to be your default management platform if you're all-in on HP servers and storage, so the features the company talked about are a nice set of additions if you're already there. The interesting note is the partnership with Arista: In many engagements, Arista will compete directly with HP network equipment, but for the converged infrastructure market HP sees the value in working with the company in partnership.

HP's announcements at Discover 2015 were mostly of the "continuing evolution" sort, though they're likely to make HP customers happy and keep IT departments looking toward Corvallis as everyone works through the implications of the two Hewlett-Packards yet to come.

Curtis Franklin Jr. is Senior Editor at Dark Reading. In this role he focuses on product and technology coverage for the publication. In addition he works on audio and video programming for Dark Reading and contributes to activities at Interop ITX, Black Hat, INsecurity, and ... View Full Bio
We welcome your comments on this topic on our social media channels, or [contact us directly] with questions about the site.
Comment  |
Email This  |
Print  |
RSS
More Insights
Webcasts
Hybrid Cloud: The Great Balancing Act
Cybersecurity's Next Wave: What You Should Know
More Webcasts
White Papers
Why Add Security to Your Skill Set and How to Do It
451 Cloud Confidence Report
More White Papers
Reports
The State of Cloud Computing - Fall 2020
Special Report: Edge Computing: An IT Platform for the New Enterprise
More Reports