How A Healthcare Clinic Plans To Become A Software Company - InformationWeek

Marshfield Clinic has been using its home-grown electronic health record system for 20 years. Now it wants to sell EHRs as a cloud service.

The problems with electronic health records are well known, and I group them into three areas: poor usability, bad data quality and inefficient data entry, and workflows that support pay-for-procedure processes rather than today's rising pay-for-performance movement. Instead of waiting for legacy EHR software makers to fix these problems, two healthcare providers -- Geisinger Health System and Marshfield Clinic -- are taking bold and potentially lucrative steps to fix EHRs themselves.

Earlier this week, I wrote about Geisinger's effort to "fix" EHRs by plugging new, interoperability-friendly apps into them. Geisinger has built a platform -- and for-profit company -- for such apps. Call it the reengineering after the fact approach.

Of course, there is another potential approach to fixing EHRs -- start all over. And that's exactly what the highly regarded, Wisconsin-based Marshfield Clinic Health System unveiled at HIMSS15.

Marshfield Clinic will offer an entirely cloud-based EHR that it has rewritten from scratch, building on its 20-year history of using its own, custom-built system. The subscription software-as-a-service will run on Microsoft's Azure cloud infrastructure platform.

I literally stumbled across Marshfield Clinic and its new MCIS Clinicals EHR at the next booth while looking for another exhibit. That's one of the delights of HIMSS, you really never know what will be in that next booth. I was already aware of Marshfield as a leading healthcare provider organization in large part because of its top performance in Medicare’s Physician Group Practice Demonstration project (PGP). PGP was the predecessor to Accountable Care Organizations, which lie at the heart of the pay-for-performance and value-based healthcare reform movement. The PGP study of 10 physician practices was designed to test whether such practices could improve outcomes at lower cost, and thus earn a bonus payment. Four sites earned a bonus -- but Marshfield earned half of the total rewards paid.

In explaining how they did it, the clinic's website cites a "well-developed electronic health record (E.H.R.) [through which] all clinic physicians have access to patient records from all clinic centers through the E.H.R., which helps to eliminate duplication of services, like lab tests and imaging. The E.H.R. helps plan visits; addresses care at the time of the visit; and assures appropriate monitoring of chronic conditions is performed."

Marshfield Clinic's use of EHR analytics dates from far before today's health data gold rush. It has had an IT department since 1965 and has been doing its own development since 1985. Most strikingly it has been using an internally developed EHR for 20 years.

Built For The Cloud

I talked with MCIS Medical Director, Dr. Bradley Bekkum, at HIMSS and learned that Marshfield Clinic is a nonprofit driven by its staff of over 700 physicians who care for some 350,000 patients. The clinic has a long tradition of forward thinking. For example, like Geisinger, Marshfield has its own insurance plan and carries the financial risk for around one third of its patients.

Dr. Bekkum described MCIS Clinicals, which the clinic showed for the first time at HIMSS15, as a "ground-up redesign" of the clinic's 20-year-old EHR. The overriding goal is to eliminate disparate systems and provide physicians with a single, integrated tool that combines traditional EHR functionality with advanced capabilities for patient portals, population health management, and analytics. It relies on a single Microsoft Azure cloud-based database supporting all of this, so everything is constantly updated. For example, the care a physician just delivered is immediately reflected in the patient's dashboard, as shown here, and in the EHRs reminders and prompts. 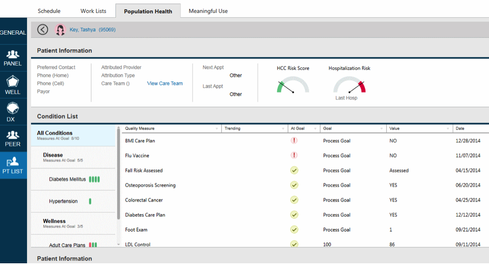 EHR, rebuilt for the cloud.

Currently, Dr. Bekkum is the sole alpha tester. Once the EHR is rolled out for broader clinical use, Marshfield patients will have a rich and up-to-date view of their own care. They'll also have access to the detailed clinical notes that doctors make in their files, in keeping with the OpenNotes concept used with great success at Geisinger. The portal will also support patient-collected data entered from the Web-based portal or smartphone application.

Like Geisinger's for-profit xG Healthcare, Marshfield has created MCIS as a stand-alone, for-profit company to market MCIS Clinicals to other healthcare organizations.

The shortcomings of today's EHRs, which xG and MCIS hope to address, are real. EHRS are too hard to use and may not display information in a useful way that contributes to efficient, evidence-based care, or that even improves safety. (That is, important patient details may be overlooked.) Data collection can be arduous (lots of clicks) and more time-consuming than using paper, and may lead to inaccurate, incomplete, or inconsistent records. Finally, for the most part, EHRs were designed in the era of pay-for-procedures to support administrative and financial business processes, rather than to support the efficient, effective patient care workflow and process required in our new pay-for-value system.

Is this user-driven innovation the wave of the future? Will tomorrow's best health informatics tools primarily derive from our best healthcare delivery organizations?

Probably not on a large scale, but to anyone looking closely, HIMSS15 provided some surprising innovations from unexpected sources. No matter what role organizations like Geisinger and Marshfield ultimately play in the health IT industry, look for their entry to raise the bar and advance the entire field more rapidly than might have been without them in the market.

Mark Braunstein has written a new book, Practitioners Guide to Health Informatics, intended as a practical guide to health informatics for care practitioners and other non-technical readers.

Mark Braunstein is a professor in the College of Computing at Georgia Institute of Technology, where he teaches a graduate seminar and the first MOOC devoted to health informatics. He is the author of Contemporary Health Informatics (AHIMA Press, 2014) as well as Health ... View Full Bio
We welcome your comments on this topic on our social media channels, or [contact us directly] with questions about the site.
Comment  |
Email This  |
Print  |
RSS
More Insights
Webcasts
Fintech at SaaS speed: Navigating the scale & security challenge
Disaster Recovery/Business Continuity in the New Normal
More Webcasts
White Papers
Zero Trust Guiding Principles
Guide to Enabling 5G Deployments
More White Papers
Reports
Why You're Wrong About Operationalizing AI
The State of Endpoint Security
More Reports