Google's Eddystone protocol aims to make beacons more flexible and open, and to compete with Apple's iBeacon in what is still a nascent market.

How To Mess Up Your First Days On The Job
(Click image for larger view and slideshow.)

Google introduced an open specification for Bluetooth low energy (BLE) beacons on Tuesday in the hope that it can encourage developers, marketers, and hardware makers to adopt its technology alongside, or in lieu of, the iBeacon system offered by Apple.

Beacons are simple hardware devices that transmit an identification code to devices configured to be attentive to the BLE signal, which typically travels up to 100 meters. Mobile apps receiving that code can then respond with a notification or other action that's contextually relevant to the location of the device and its owner.

Apple introduced its iBeacon protocol two years ago as a way to engage consumers with mobile devices, and its technology has spurred significant interest among marketers and hardware makers. Last year, the company began certifying devices using its iBeacon trademark through its MiFi Licensing Program. The program requirements prompted iBeacon licensee Radius Networks to alter its product documentation and to disassociate its Android iBeacon Library from iBeacon product listings.

While Android developers can still create apps that communicate with iBeacon hardware, Google has reason to promote an open-source alternative, particularly now that Facebook is promoting beacons and Twitter has invested in beacon firm Swirl. 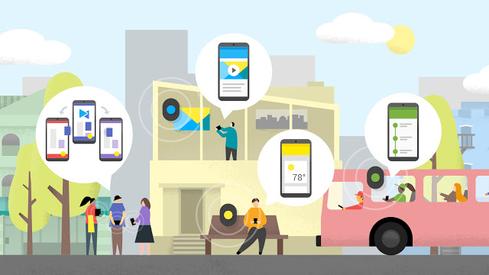 Google is calling its beacon protocol Eddystone, a name that comes from a lighthouse in England. It's available on GitHub, under the Apache 2.0 license. The software supports Android, iOS, and many BLE devices. It is compliant with the Bluetooth Core Specification. In contrast to iBeacon, it also supports multiple types of data (frame types). So while an iBeacon is limited to broadcasting an identification code, an Eddystone beacon could transmit an identification code, or a URL, or telemetry data about voltage or device temperature.

Google is also releasing two APIs: The Nearby API for Android and iOS, which allows developers to create publish and subscribe methods to share messages and connections between nearby devices, and the Proximity Beacon API, to manage data associated with a BLE beacon through a REST interface.

The Nearby API is part of Google Play Services, which isn't open source. Eddystone beacons don't require these APIs but they're easier to implement with them.

Beacons are commonly marketed to help people find their way around, and to provide information to them relevant to specific locations, such as digital coupons in store aisles, bus schedules at bus stops, and historical information in museums.

"Just like lighthouses have helped sailors navigate the world for thousands of years, electronic beacons can be used to provide precise location and contextual cues within apps to help you navigate the world," explained Google engineering director Chandu Thota and product manager Matthew Kulick in a blog post.

The lighthouse comparison overstates the need for real-world navigation assistance. It's not as if prior to beacons people got lost for days in malls or ran aground at Chipotle because they couldn't see it in the darkness. In short, beacons solve a problem few people have. They also demand greater disinterest in privacy.

Forrester analyst Adam Silverman acknowledged the issue in a phone interview. "Beacon implementations are being tested, but currently the value to customers is limited," he said. "This is mainly because the use-cases being produced by vendors are not meeting customer needs."

Benjamin Gordon, an iOS engineer based in Alabama, said in an email that that he was part of a development team at a digital consultancy that investigated iBeacons for several clients.

"One of our clients was a hospital system that was looking into mapping and using marketing upsells at various locations around the hospital in tandem with an iPhone/Android app," said Gordon. "We never fully implemented these beacons inside the hospital, we were in the 'validate technology' phase of the project."

Gordon said he was skeptical about the current state of beacon technology because the user experience is inconsistent. "Sometimes two or more different iDevices would have totally different responses to the same iBeacon (all other things constant)," he said. "Some iDevices would not register beacons unless you did a hard restart on the device. On the other side of the coin, inconsistency also affected the beacons themselves. We constantly found that estimated battery life was not correct and that beacons would fail all the time. Electromagnetic interference seemed to be a problem as well in our internal tests."

Nonetheless, Gordon said the technology has promise if the hardware becomes more reliable.

Many organizations believe as much. They see real value in being able to engage people in retail and public settings. Among companies that have been pursuing mobile initiatives for three years or more, 70% are conducting beacon trials, said Silverman.

"It's just a matter of time before the beacon community uncovers initiatives that add value to customers."

Thomas Claburn has been writing about business and technology since 1996, for publications such as New Architect, PC Computing, InformationWeek, Salon, Wired, and Ziff Davis Smart Business. Before that, he worked in film and television, having earned a not particularly useful ... View Full Bio
We welcome your comments on this topic on our social media channels, or [contact us directly] with questions about the site.
Comment  |
Email This  |
Print  |
RSS
More Insights
Webcasts
Making XDR Work in Your Enterprise - May 12
How the Rapid Shift to Remote Work Impacted IT Complexity and Post-Pandemic Security Priorities
More Webcasts
White Papers
Tech Insights: SASE's Pandemic Boost Likely to Stick
Cisco Threat Response
More White Papers
Reports
[Tech Insights] SASE's Pandemic Boost Likely to Stick
Protection Strategies for a Cyber-Resilient Organization
More Reports

To put it another way, advertising is bad but information is good.
Reply  |  Post Message  |  Messages List  |  Start a Board
InformationWeek Is Getting an Upgrade!