DevOps: A Culture Shift, Not A Technology - InformationWeek

Andi Mann, author and VP at CA Technologies, says DevOps is a horrible term but a necessary IT culture change.

DevOps is not a new technology or a product, contends Andi Mann, VP of strategic solutions at CA Technologies. Although his company offers a list of DevOps products, Mann advises, "if someone tells you, 'I'll sell you DevOps,' get up and leave the meeting." Likewise, it's not a specific discipline or methodology. Nor is it a new role in IT.

"It's an approach or culture" of software development that seeks stability and performance at the same time that it speeds software deliveries to the business, said Mann, who co-authored the popular handbook "Visible Ops -- Private Cloud" and, most recently, "The Innovative CIO."

The primary goal of DevOps is making reliably performing production software that can be changed rapidly. To do so, development teams have to accept the feedback of operational teams, who typically view the software they receive from developers with a jaded eye because its stability is still unproven.

Operations, in turn, must accept frequent updates to the software that it's running, which has been anathema to their goal of keeping production systems stable. The most frequent cause of outages is poorly executed updates. Many companies are discussing these conflicting goals, and Microsoft, PayPal, and Rackspace, among others, have already been through the stability-versus-rapid-update debate. They've resolved the issue in favor of a DevOps approach. Satya Nadella ascended to the CEO's role at Microsoft in part because he insisted that the Windows software group take a more DevOps approach and made it stick.

[Want to learn more about interactions between developers and operations? See Where Agile Development Fails: IT Operations.]

"The term 'DevOps' is a horrible one," said Mann at a talk on "What Smart Businesses Know About DevOps" at the InformationWeek Conference in Las Vegas March 31, and also in an interview afterward. DevOps suggests that the life of a software application "begins with development and ends with operations," when in fact it may be under continuous development to reflect changing business conditions. Mann said he favors the terms "continuous delivery" or "continuous integration" over DevOps, but DevOps enjoys greater currency at the moment. The other two terms focus more on a sustained ability to reliably modify production systems.

Much of the know-how associated with both software development and operations resides in the minds of experienced old hands in the two organizations. They not only don't talk to each other but sometimes encourage skepticism and mistrust between the two organizations. What knowledge they do have is "tribal knowledge" that disappears as they move on or retire. DevOps imparts more structure and procedure on interactions between the two and tries to make reliable operational performance a more conscious goal.

Getting the two organizations talking to each other is a primary goal, said Mann. That can be done through meetings at work, but also through more informal encounters, such as an excursion together to a paintball park. "Just don't set up opposing paintball teams, development vs. operations," he said with a laugh.

CA commissioned a survey on DevOps by the British firm Vanson Bourne. Of the 1,300 IT managers surveyed, 39% said they were already using DevOps to some degree and 27% said they had a DevOps strategy they were preparing to implement, but 16% said they didn't know what DevOps was. Mann said that figure has been higher in some of CA Technologies' own surveys.

Of those companies that say they've initiated DevOps, 67% of them say its improvements in software delivery have led to revenue increases, Mann noted. 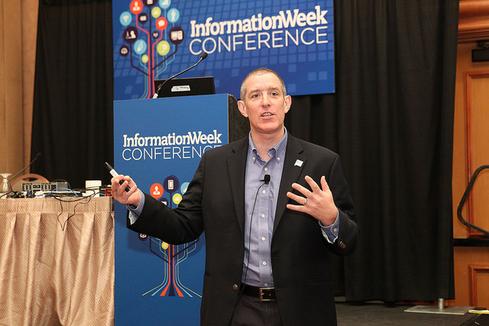 Andi Mann at the InformationWeek Conference, which was colocated with UBM Tech's Interop Las Vegas.

Implementing DevOps doesn't start with one side or the other but "getting both developers and operations managers connected to the business," Mann at the InformationWeek Conference.

Agile development methods consciously do this, but it doesn't matter what technique a company uses, as long as both operations and development come to an understanding that they jointly share responsibility for delivering software to the business as it needs it. "Give them the feeling that they are on the same team, not enemies," he said. The latter is often the status quo in how you find them regarding each other.

Operations must not only provide measured and accurate feedback on the performance of new software but accept the fact it is going to have to mesh frequent updates into production systems. "If you want to be in the mobile game, you need this," he said.

To get software delivery schedules better aligned with the business, it's important to avoid imposing too many bureaucratic processes and approvals on development teams, even though they might guarantee a measure of the desired collaboration among the parties involved. "Streamline processes. I can't emphasize that enough," said Mann. Too much process will interfere with the main goal, which is rapid delivery of software features and function.

"Share responsibility for performance in production. Developers wear pagers (the same as IT operations managers). They're called when things go wrong and asked to explain why the software might be behaving the way it is. Being called out of bed confronts developers with the kinds of issues operations constantly deals with," he said.

"It's very much about continuous feedback loops, continuous collaboration, continuous delivery, and continuous innovation," he said. It's also about both development and operations practicing "continuous secure use to enable this speed of delivery, rather than slow it down," he said.

DevOps grew out of the companies that were trying to build Web-scale applications that needed to scale out to millions of users and rapidly add new features. But that doesn't mean it's only suitable to such companies. "It scales down really well" to smaller companies engaged in more traditional types of businesses, he added.

Charles Babcock is an editor-at-large for InformationWeek and author of Management Strategies for the Cloud Revolution, a McGraw-Hill book. He is the former editor-in-chief of Digital News, former software editor of Computerworld and former technology editor of Interactive ... View Full Bio
We welcome your comments on this topic on our social media channels, or [contact us directly] with questions about the site.
Comment  |
Email This  |
Print  |
RSS
More Insights
Webcasts
Key technology trends in 2021 - Making these technologies work for your business
Zero Trust for a Work-From Home World
More Webcasts
White Papers
Why Add Security to Your Skill Set and How to Do It
Protection Strategies for a Cyber-Resilient Organization
More White Papers
Reports
The Malware Threat Landscape
Special Report: Edge Computing: An IT Platform for the New Enterprise
More Reports

See also, Visible Ops Private Cloud: From Virtualization To Privbate Cloud in 4 Practical Steps. From the IT Process Institute, by Andi Mann, Kurt Milne and Jeanne Morain. The IT PRocess Institute was previously publisher of a key guide on how to get to ITIL "in four practical steps." It's a key source of experienced guidance. "Visible ops" emphasizes creating highly visible, modular services out of virtualized resources for future IT effectiveness. It shifts the focus off consolidation.

I could not agree more with Andi Mann. Although he's he expert, I pretty much said the same thing a while back in a blog I wrote. Here's the link to it:

This reminds me of another earlier discussion: The cloud is not a technology -- or a place. This column could be useful if you are explaining DevOps to someone on the business side. Also, have you seen vendors trying to apply a DevOps coat of paint to products, readers?
Reply  |  Post Message  |  Messages List  |  Start a Board

Thnaks for the article Charlie, and the plug for 'Visible Ops - Private Cloud'. The intersection of cloud and devops is really important to help drive the speed and agility that devops is trying to achieve. After all, it is hard to release new code 5 times a week when it takes a month to stand up a new server!

There was probably no more deeply entrenched waterfall culture on earth than the Windows development team at Microsoft, when Satya Nadella arrived to announce that it was moving to a more agile approach. James Staten captured that in his guest column: http://www.informationweek.com/cloud/platform-as-a-service/nadellas-rise-as-change-agent-inside-microsoft/d/d-id/1113780 Anyone who thinks it's easy to get to five updates a month from one update every several years should check to see if Nadella agrees.

Aren't the IT experts sick and tired of saying the same things for the last 2 decades or so? One is change the culture of the IT and business organization, another is align business and IT. I have heard this almost every time I open an article under a foolish assumption that it will say something different. Or maybe there is indeed nothing different to say because finally you are not indulging in rocket science but making an application. Big deal !
Reply  |  Post Message  |  Messages List  |  Start a Board

Anon024etc.,  IT has never concentrated on rapid software changes before. On the contrary IT operations has slowly come to regard them as highly dangerous and as a kind of plague. You must be very advanced in your shop if accomplishing this isn't something new. Or maybe you know all about it, just aren't doing it yet?

Thanks for commenting. I think you make a fair point that many pundits, myself included, have been saying something along those lines ("align IT with business") for years. But I would counter your reasonable concern with 2 points:

1) We keep saying it because we still haven't achieved it, and still need to find a way to do it. Survey after survey shows there is still an ongoing disconnect between IT and business leaders. The rise of 'Rogue IT' or 'Shadow IT' is a direct result of this disconnect.

2) As Charlie notes, we are starting to find some new approaches to solving this issue. While not eveything in DevOps is brand new (surely ops and devs have collaborated before), we are leveraging processes and technologies that have not existed before (devops, cloud, release automation, service virtualization, continuous everything)

So yes, we keep saying it. But only because we need to, and we see ways to make it happen.

Production failures might be attributable to trying to attempt the rapid implementation of change (Continuous Delivery), and organisations might believe they can deliver change more quickly by employing Continuous Integration (small frequent changes). However, even if you can effectively manage CD and CI (together assumed to be "DevOps"), large organisations still have to adhere to rigourous Quality Assurance processs.