Adobe's Flash Professional next year will be called Animate CC, and it will focus on creating HTML5 content.

Adobe's Flash platform just won't die. Though Apple's Steve Jobs hobbled it in 2010 with his blistering critique of the technology, Thoughts on Flash, Adobe Flash has soldiered on. Like the Black Knight in Monty Python and the Holy Grail, Flash just keeps stumbling forward, oblivious to its mortal wounds.

Now even Adobe is acknowledging Flash's decline. On Monday, Nov. 30, the company said that Flash Professional will be renamed Animate CC, starting with the next release in Spring 2016. Despite losing Flash in its name, the app will still support Flash (SWF) and AIR formats. It's focus, however, will be HTML5 output.

"Today, open standards like HTML5 have matured and provide many of the capabilities that Flash ushered in," Adobe said in a blog post. "Our customers have clearly communicated that they would like our creative applications to evolve to support multiple standards and we are committed to doing that."

Adobe plans to release an HTML5 video player for desktop browsers, to match its support for HTML5 on mobile devices. One of the reasons Flash has endured so long is that so much video content was created as Flash video. 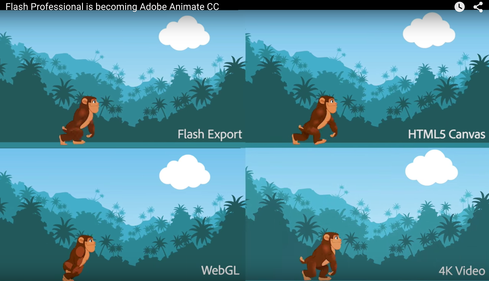 Though Flash's fate was sealed years ago, support for the technology eroded significantly this year. In January, YouTube began streaming HTML5 by default instead of Flash. In July, Facebook CSO Alex Stamos called for an end-of-life date for Flash and indicated that Facebook is working on support for HTML5 videos on desktop computers. That same month, Mozilla temporarily banned Flash by default until security vulnerabilities could be addressed. Apple has also periodically blocked outdated versions of Flash in response to security issues, most recently in October.

In September, Google's Chrome browser began blocking Flash content, notably ads, by default, "to increase page-load speed and reduce power consumption." Google's repudiation of the technology should convince anyone still wedded to Flash content that it's time to consider other options.

Signs of ill-health have been present for years though. As of April last year, Adobe Media Encoder no longer included presets for F4V or FLV files, the Flash video format. And going back to 2011, Adobe's decision to cease Flash development for mobile devices ensured the technology's days would be numbered.

[HTML5 or Native? Here's how app developers can decide.]

Yet Flash isn't so much dying as decaying. Rather than an expiration date, it has a half-life. While many in the tech industry are eager to pay their respects and move on, Flash looks as if it will linger on.

Al Hilwa, IDC program director for software development research, characterizes Adobe's rebranding of Flash Professional as shift in focus that demonstrates the company's capacity to innovate. "Flash has a significant developer and Web designer base that continues to build websites, apps, and content with it, and so the platform has to continue to be secure," said Hilwa in an email. "A variety of industry players like Microsoft, Google, and now Facebook are beginning to understand this reality and so are collaborating with Adobe to keep the platform secure."

Thomas Claburn has been writing about business and technology since 1996, for publications such as New Architect, PC Computing, InformationWeek, Salon, Wired, and Ziff Davis Smart Business. Before that, he worked in film and television, having earned a not particularly useful ... View Full Bio
We welcome your comments on this topic on our social media channels, or [contact us directly] with questions about the site.
Comment  |
Email This  |
Print  |
RSS
More Insights
Webcasts
Building Asset Management into Your Enterprise Security Strategy
How the Rapid Shift to Remote Work Impacted IT Complexity and Post-Pandemic Security Priorities
More Webcasts
White Papers
Cloud Threats Are Different, Your Security Should Be Too
The Impact of the SolarWinds Breach on Cybersecurity
More White Papers
Reports
The State of Endpoint Security
Assessing Cybersecurity Risk in Todays Enterprises
More Reports