50%
Tweet
More than 10,000 Internet videos and programs, including Funny or Die and Bablemusic, can be streamed on LG Blu-ray and home theater systems. 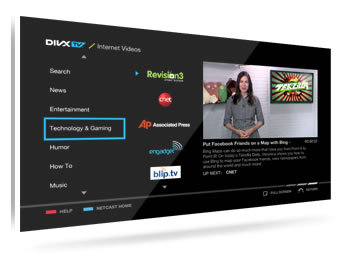 More than 10,000 videos are available, along with original Web programming and customized content, the San Diego-based DivX said. Launched in October, DivX TV can be easily integrated into almost any connected device at the chip level as well as complement existing over-the-top content or application platforms, the company said. It requires no keyboard, mouse, or additional hardware and no registration, DivX said. "The easy-to-use DivX TV interface gives you immediate, free access to popular Internet videos and original Web programming all in one place, and on your schedule,'' according to the company's Web site.

The service is embedded in LG Electronics' BD550, BD570, and BD590 Blu-ray disc players and LHB335, LHB535, and LHB975 home theater systems available in the United States through retailers including Best Buy and Amazon.

"Consumers have responded very positively to the launch of DivX TV and the entertainment control and selection the service provides them,'' said Matt Milne, DivX executive VP and general manager, in a statement. "We look forward to working with our partners and bringing more quality Web programming such as CNET and Funny or Die to the living room."

Other players in the ever-growing streaming TV space include Roku and other set-top boxes that offer content from different providers. Sony last week announced it has partnered with Sky News for its Bravia Internet Video portal. In November, Hulu launched its Plus premium service for Internet-connected TVs and mobile devices, and Boxee Box, a device that connects to a TV set to stream Internet movies and shows, also made its debut.

The DivX TV service is expected to launch in Europe next year.

We welcome your comments on this topic on our social media channels, or [contact us directly] with questions about the site.
Comment  |
Email This  |
Print  |
RSS
More Insights
Webcasts
Protecting Mobile Apps and APIs from the Inside Out
How Cyber Attackers Will Use & Abuse AI, ML Against the Enterprise
More Webcasts
White Papers
Wi-Fi 6: The (Much) Bigger Story
2020 Trends to Watch: Cybersecurity
More White Papers
Reports
The New Face of IT Automation
State of Cybersecurity Incident Response
More Reports