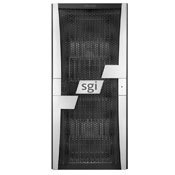 The SGI Altix UV, unveiled Monday at the SC09 supercomputer conference in Portland, Ore., is targeted at large-scale databases and data analytic environments. The system can combine Intel's highest core chip, codenamed Nehalem EX, with SGI's NUMAlink 5 interconnect to deliver its highest performance of 18.6 teraflop per second. A teraflop is a trillion calculations.

The shared memory supercomputer is based on a blade architecture and scales from 32 to 2,048 cores. The system supports up to 16 terabytes of memory and the NUMAlink interconnect delivers 15 GB per second of bandwidth between blades.

SGI has several customers committed to adopting Altix UV, including the Unversity of Tennessee, the North German Supercomputing Alliance, and the Institute of Low Temperature Science at Hokkaido University in Japan.

Altix UV will be available with Nehalem EX after the chips are available in volume in the first quarter of next year. The system, however, can also run on Intel's quad-core Xeon processors, as well as the six-core chips the company is expected to ship next year.

Pricing and availability is available upon request.

SGI was acquired this year by server maker Rackable Systems for $25 million. Rackable has adopted the SGI name.

SGI also sells two servers based on Intel's Itanium Series 9000 processors. The Altix 450 is for the mid-range market and the Altix 4700 is a supercomputer that offers 512 sockets.


InformationWeek Analytics has published an analysis of the current state of mainframes. Download the report here (registration required).

We welcome your comments on this topic on our social media channels, or [contact us directly] with questions about the site.
Comment  |
Email This  |
Print  |
RSS
More Insights
Webcasts
Defense and Response Against Insider Threats & User Errors
Succeeding With Secure Access Service Edge (SASE)
More Webcasts
White Papers
Exclusive IT Trend Report: Chatbots
5 Key Steps for Assessing Your Security Effectiveness
More White Papers
Reports
Meetup Vulnerabilities: Escalation of Privilege and Redirection of Funds
Online Threats -- and What Your Org Can Do About Them
More Reports