Highlights of exclusive InformationWeek Analytics research as it appears in "State Of Server Technology 2010," our report evaluating changes in the server market motivated by the push to consolidate data center systems, get power and cooling costs under control and make the most of the cloud. 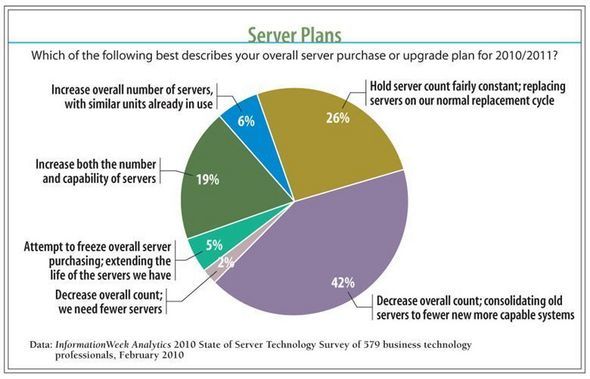 One-quarter of the 579 business technology professionals who responded to our 2010 State of Server Technology Survey told us their organizations plan to invest in more physical servers in 2010/11. But far more -- 44% -- said they intend to decrease their server counts, indicating that system consolidation and virtualization are becoming increasingly critical to efficient data center operations. Those planning to keep server counts about even over the year: 31%.

The result is that the server value proposition is shifting from the processor to peripheral considerations, such as the ability to effectively implement virtualization, system manageability, and power and cooling.

Indeed, after acquisition cost, the ability to deploy, manage and redeploy on-the-fly virtual processors (from physical or logical cores) is the single most important factor in server technology today. The uptake of these supporting technologies has been slowed to some degree by constrained IT budgets, set in late 2009, before the green shoots of recovery sprouted. Nonetheless, system consolidation and increased use of virtualization will continue to drive server updates, as IT organizations extract maximum usage from available resources. That's the top-level finding from the 579 business technology professionals who responded to our InformationWeek Analytics 2010 State of Server Technology Survey. 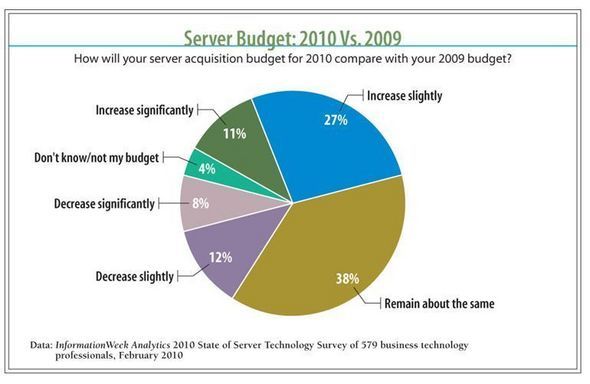 Recovery or not, maximizing existing resources is a top priority. Nearly two-thirds of our poll respondents said their server spending this year will stay even or increase only slightly over last year. Only 11% said they expect to spend more on servers this year, while nearly double (20%) plan to spend less. 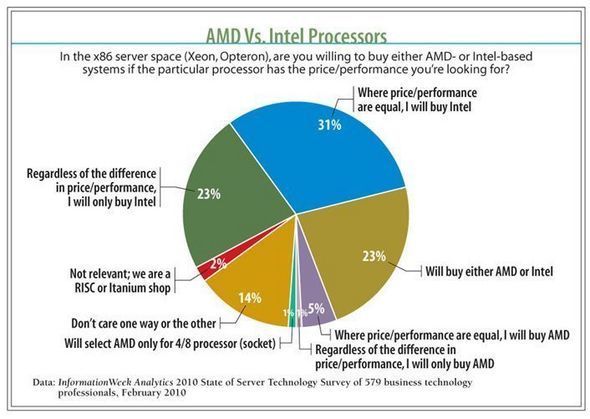 The battle between the x86 giants rages on, spurred by the March entries of Intel's Nehelam EX (Xeon) and AMD's Magny-Cours (Opteron). Still, many server buyers remain processor-vendor-neutral; more than one-third of survey respondents told us, given equal price/performance, they'd buy either AMD or Intel or the processor wouldn't even factor into their decision. Nearly another third said, price/performance being equal, they'd go with Intel, vs. only 5% who said the same about AMD. Nearly a quarter said they'd go with Intel no matter what, vs. only 1% who expressed similar loyalty to AMD. 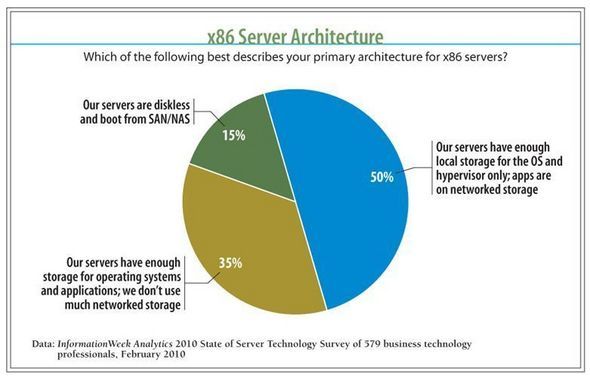 Exactly half of the business technology pros responding to our poll said their organizations' servers have sufficient local storage to accommodate just the operating system and hypervisor, but their applications reside on networked storage. More than one-third said they don't need much networked storage--their servers are big enough to handle it all. The remaining 15% said no room at the inn-their servers are diskless and boot from SAN or NAS devices. 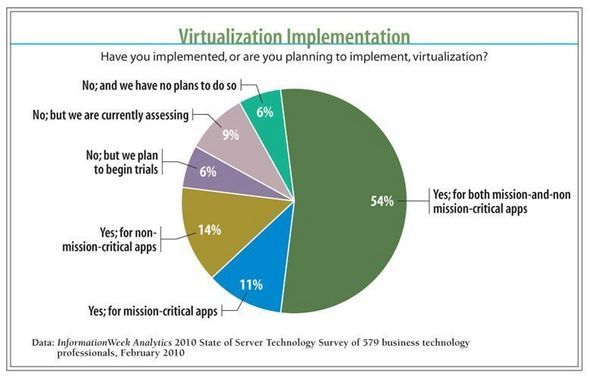 Nearly 80% of our server tech poll respondents said they have implemented or plan to implement virtualization, and another 15% are evaluating virtualization or intend to start trials for their organizations-all this despite the inevitable challenges of managing virtual resources. To meet this unprecedented demand, Cisco, Dell, Hewlett-Packard and IBM are offering both VMware and Microsoft's Hyper-V as virtual environment platforms, in addition to supporting Citrix XenServer, and Oracle, which now owns Sun, is promoting Oracle VM.