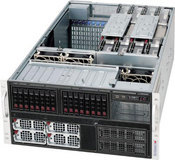 Super Micro also announced plans to released a 5U enterprise server capable of running eight of Intel's 10-core Xeon processors. The company said it plans on making the system available with the 10-core processors, codenamed Westmere-EX, shortly after they are available in early April, Douglas Herz, marketing manager for Super Micro, said in an interview.

The new product, unveiled in November at the SuperComputing Conference in New Orleans, stands out from the competition in packing so much in a 5u system, which includes the 8 CPUs, 64 DIMMs, up to 10 PCI 2.0 expansion slots, and 24 hard drives, Herz said. The system is targeted at financial institutions, research groups, oil and gas companies, and other organizations with a need for high-performance computing.

In addition, the system has four power supplies, each capable of generating 1,400 watts of power. The power supplies are paired so one can act as a backup. "If one goes down than the other is ready to take over the power needs of the system," Herz said.

Super Micro did not disclose pricing.

The company also launched at CeBIT a high-density blade server called the SuperBlade SBI-7126TG. Each of the 10-blades in the 7U system supports two Nvidia Tesla M2050/M2070 GPU cards and two Xeon CPUs from either the 5500 or 5600 series. Each node uses a Gen2 PCI-Express x16 connection.

Like the SuperServer 5086B-TRF, the latest SuperBlade system is targeted at organizations in need of high-performance computing systems. The difference is in the availability of the Nvidia GPUs for offloading from the CPU mathematical calculations that are measured in the trillions per second in many research organizations.

Typically, HPC developers will split application workloads between the CPU and GPU, taking advantage of the strengths of each processor. In general, GPUs are better at handling computational tasks. Nvidia has been shipping its Tesla GPUs for HPC applications since 2007.

Pricing for the SuperBlade SBI-7126TG was not disclosed.

We welcome your comments on this topic on our social media channels, or [contact us directly] with questions about the site.
Comment  |
Email This  |
Print  |
RSS
More Insights
Webcasts
SecDevOps: Tying Security to Your Application Development Processes
Using Artificial Intelligence, Deep Learning and Machine Learning for Cyber Defense
More Webcasts
White Papers
DevOps for the Database
The Cloud-First WAN For Dummies
More White Papers
Reports
Annual Global State of the WAN
Special Report: Edge Computing: An IT Platform for the New Enterprise
More Reports